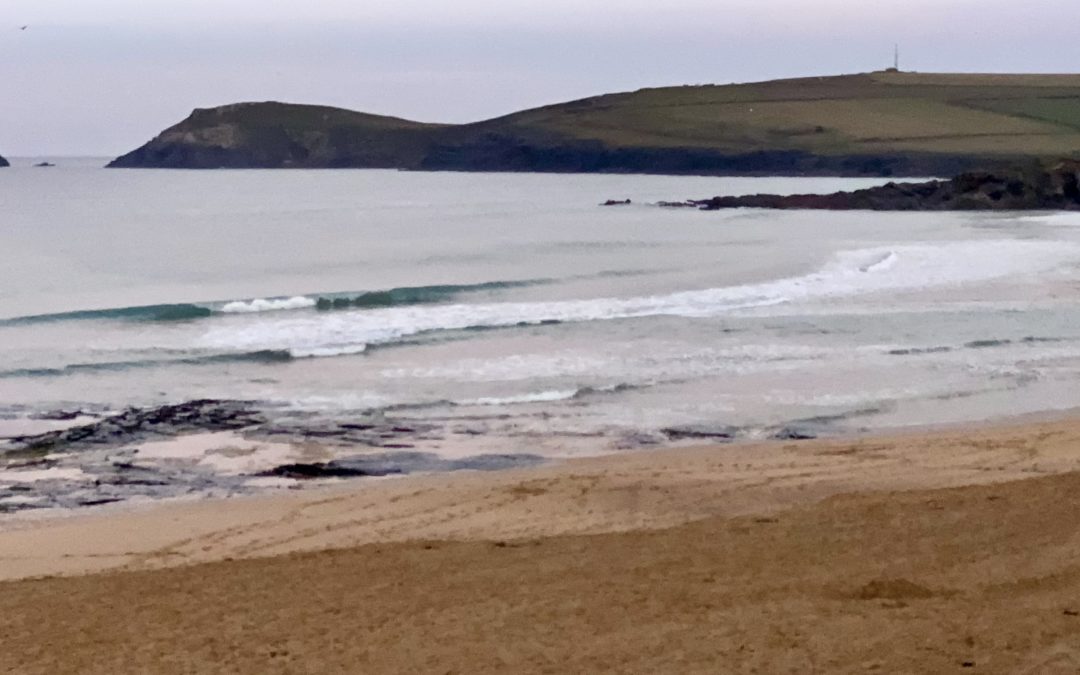 Ribbons of Pink and Blue are streaking the otherwise pale grey sky on a calm and silent morning down in the bay, the woosh and swoosh of small but immaculately shaped little surf echoing across the sand.
The surf is no bigger than a foot or two but there are huge gaps between those little waves making for some relative power in them.
If you have a longboard to hand and the time to glide then you’re in for another very pleasant day of fun little surf!

I’m away again for a few days so no Surfcheck until next week!

It’s all silent down in a deserted Harlyn Bay this morning, the sea still and almost waveless, the air still and the sky ribboned with the pinks and blues of a mid-January dawn.
It is all very nice and peaceful and chilled but there ain’t no surf, no surf at all!

A new swell is going to be chopped and slopped by chilly north westerly winds today with two or three feet of mid-teens wave-period swell crashing onto our favourite surf breaks.
So the surf should be better than it looks but it is likely to be a bit of a bumpy ride.

Surf Conditions for the Rest of the Week and the Weekend

I’m away again for a few days from tomorrow so no Surfcheck until next week.  In the meantime here’s an extended surf forecast to include the coming weekend:

Long period swells are going to be lazily rolling our way through the back half of this week with glassy conditions treating us all to some fun surf over the weekend.
But before that we are going to see a little ripple in the otherwise settled weather patterns.
A northerly wind is likely to blow down the coast midweek, chopping the new three foot swell that should roll in on Wednesday morning.
But that swell is another long period one with a good fourteen or fifteen second wave period making it more organised and stronger than it might otherwise be.
Offshore breezes should be gently grooming those swells agin through the end of the week, the swell dropping in size but keeping that well travelled strength to it as we go into the weekend.
So there should be great surf on offer all along the coast through Friday, Saturday and Sunday with the wind dropping to allow for glassy, clean conditions, especially on Sunday.
It’s all looking good for some enjoyable weather and surf wherever you decide to jump in on this coast for the next several days!
Stay safe, stay happy, stay well and have a great week and weekend, wherever you are and whatever you’re doing!