Eek, it’s cold out there in that sand blasting north westerly wind this morning!  And the surf is junk too.

That wind is blowing in hard, bending the hedges and blasting those waves, stirring the sea into a bit of a fury.  It’s not pretty and it’s not inviting in spite of the bright skies.  And those bright skies are giving way to powerful downpours every now and then, brief as they flash over us but wet and cold too.

I think that the only chance that we have of seeing some clean surf today is by heading south to the far coast but let’s have a hop and a skip over to Harlyn for a look….. 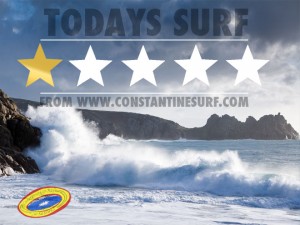 The waves are being tugged and pulled and pushed by that howling wind, taking away any sense of direction and any purpose.  It’s just a junked out mess of choppy surf this morning and it’s probably going to be that way all day!
Even the sight of a magnificent older double-axled Hymer camper parked up and ready for Summer is looking a little forlorn.
It’s just too windy, too chilly and too unwelcoming this morning!

It looks like we are in for a funny old one today, the swell is likely to have dropped and so too the wind, first thing anyway.  But that wind is then likely to strengthen again quite quickly before swinging to the south east, offshore at our main breaks!

So, we might just luck into some really quite good surf, if only for a little while at a time.
As the wind increases in strength and changes direction, there should be just a moment or two when the surf could/should really clean up and hollow out.
It’s likely to be back to onshore and hideous again by noon but it could just be very good around the mid morning high tide!  Shame about the weather though.

There’s a mixed up old week lying in wait with the wind forecast to switch about all over the place, the swell bouncing up and down as different little swells converge on each other before stumbling into our bays and coves, while the temperatures change from almost freezing to quite comfortable and back again every few minutes.

That lively leftover wind from the weekend should swing offshore at our main surf breaks if only for a while through Monday morning before returning to that clawing and chilly onshore, north westerly by the afternoon.
Things are likely to have calmed a lot by Tuesday, the variable breezes allowing some cleaner surf through again, if only for a while.
And that mixed up pattern is looking to prevail through midweek too with the wind switching all over the place, increasing in strength and then calming quite quickly, those chilly and heavy showers blasting through and being replaced by bright sunny moments.
You are going to have to be on it to find the best surf conditions this week, it will be good but probably only for short periods of time and only here and there.
But by keeping a keen weather eye out for those changing winds and by watching those tides, we should be able to find some better than average surf conditions for most of the time!
Have a great week, whatever you’re doing!