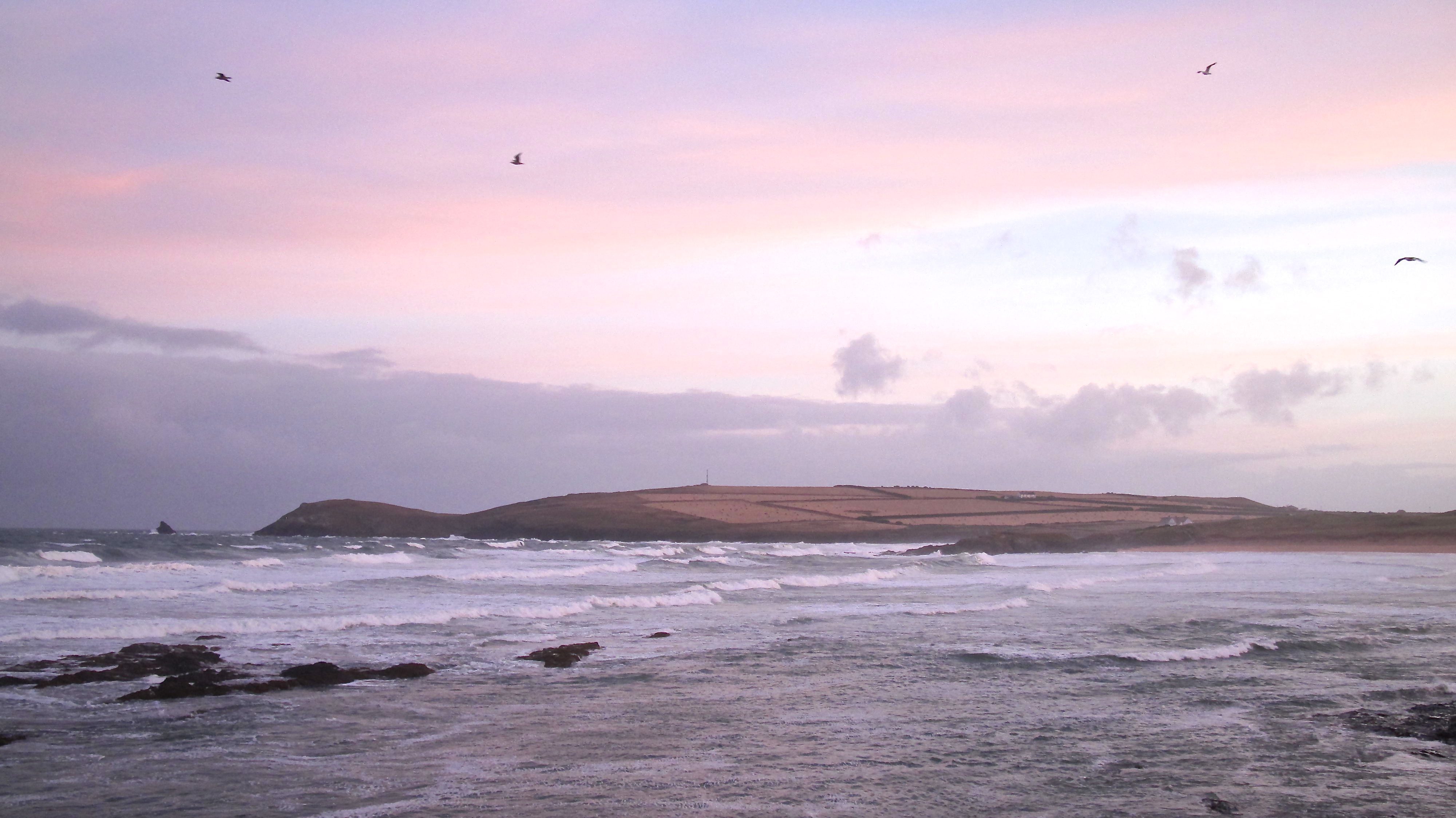 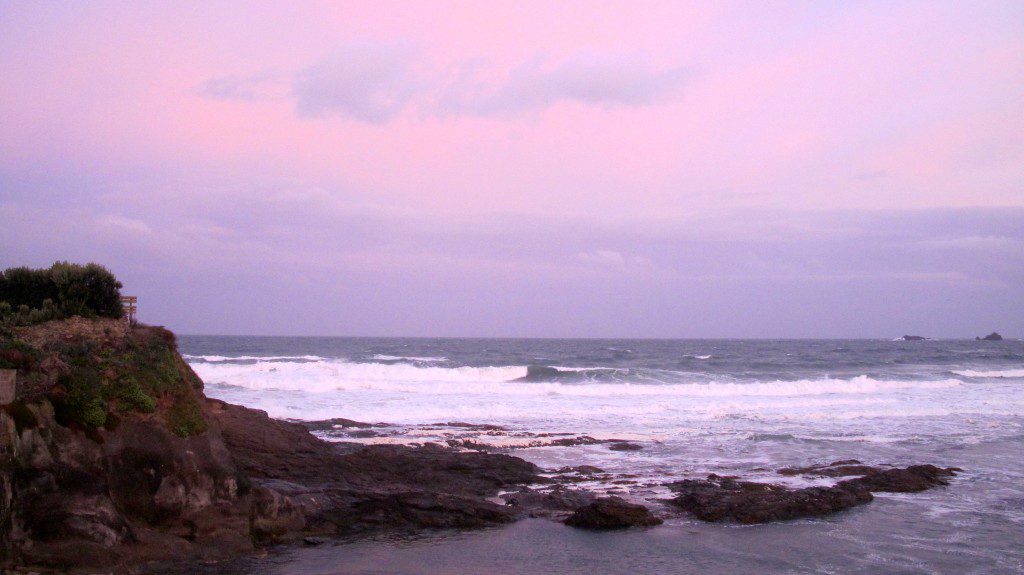 As the wind blows, so the waves roll in.
Four to five to probably six feet of wild ‘n windswept surf is rolling up the beach this morning under a cloud scattered sky full of threat and promise.
The south westerly wind is gusting and blowing, pushing that already thick and heavy looking swell into a bit of a mixed up mess of surf. Some of the waves are jumping and rearing before exploding across the Reef, others are fat and lazy just washing ashore.
Here is not the place for a surf today, well not unless the wind switches or backs off and neither of those are forecast yet.
Let’s have a squint at Harlyn, it should be more protected around there…… 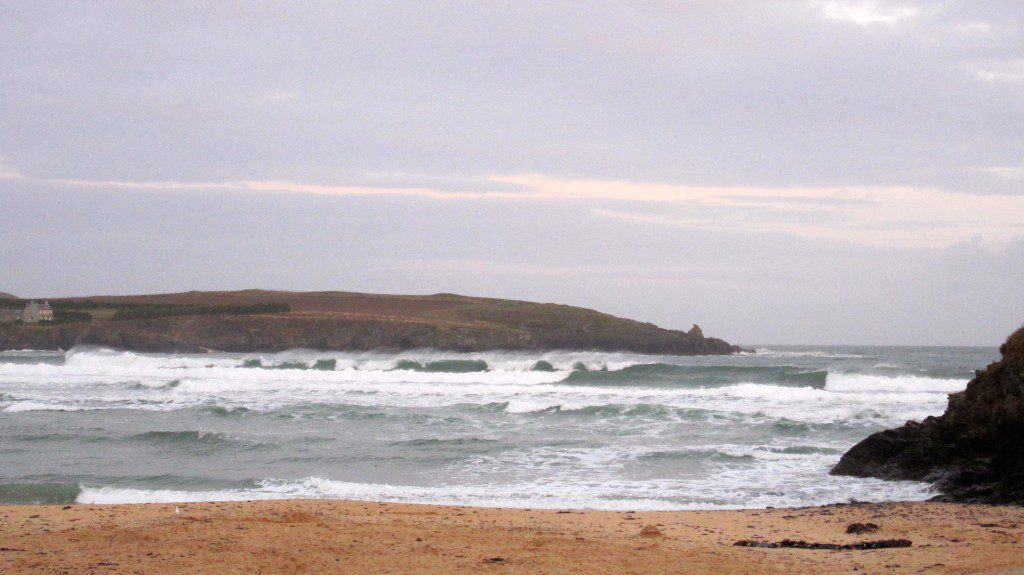 It’s bumping in here this morning too, three to four feet of fresh and lively looking surf jumping up ahead of high tide, that brisk and blowy south westerly wind blowing into them.
The set waves are bouncing up off the far headland throwing spray high and far before marching ashore where they briefly pause before grinding ashore.
Yep, it looks like fun out there but it’s going to be busy!

Westerly winds are going to continue to support that rolling swell, a thick and heavy, fairly sizeable rolling swell.
So the main surf breaks are also likely to continue to be thick and sloppy, heavy and windswept.
it’s the sheltered spots again for a surf today, Harlyn being our most popular locally. And that is likely to be a little bumpy too, the wind probably having that much more west to it and maybe even a little more north as well.
So, four feet of bumpy and bouncy, busy Harlyn, not perfect but promising to be a whole heap of fun!

The Bank Holiday weekend traditionally ends our main holiday season, marking a return to a slower, quieter pace of life as the vast majority of visitors exit the area. This year there is a much more gradual emptying, with that extra August week.
And those who do stay on have been enjoying some surf, some proper rolling Atlantic curlers, just like in the postcards!
The week started with a half decent three foot and building swell rolling in, the wind mainly onshore but south, going south westerly. By Tuesday we were enjoying a proper five to six feet plus of growling swell with offshore breezes. All of our main surf breaks were be on fire and even Harlyn kicked in properly for the first time this summer!
The swell settled down by midweek, still that rolling swell, all bumpy and grinding in at the main breaks with enough push to provide some alternatives at the sheltered spots too, the decision being between bigger and bumpier, choppier west facing beaches versus smaller but much cleaner, sheltered spots.
And by Friday, the next spell of thick and rolling swell is washing our way, the wind having backed to the south west, merrily pushing along that swell. And we can now expect some solid, thick and lumpy surf for the whole weekend, the wind gusting strongly through Saturday helping to push swell in, easing just a little in strength but also maybe swinging a little westerly, maybe (hopefully not) even a little north westerly through Sunday.
We will probably mainly be surfing Harlyn in three to four foot and sharp conditions as we go into the weekend, possibly getting bigger on the incoming tides.
So a bright and breezy weekend awaits, filled with the crash and bang of proper surf and enough brightness, especially through Sunday to keep most happy!
Have a great week, wherever you are and whatever you’re doing!