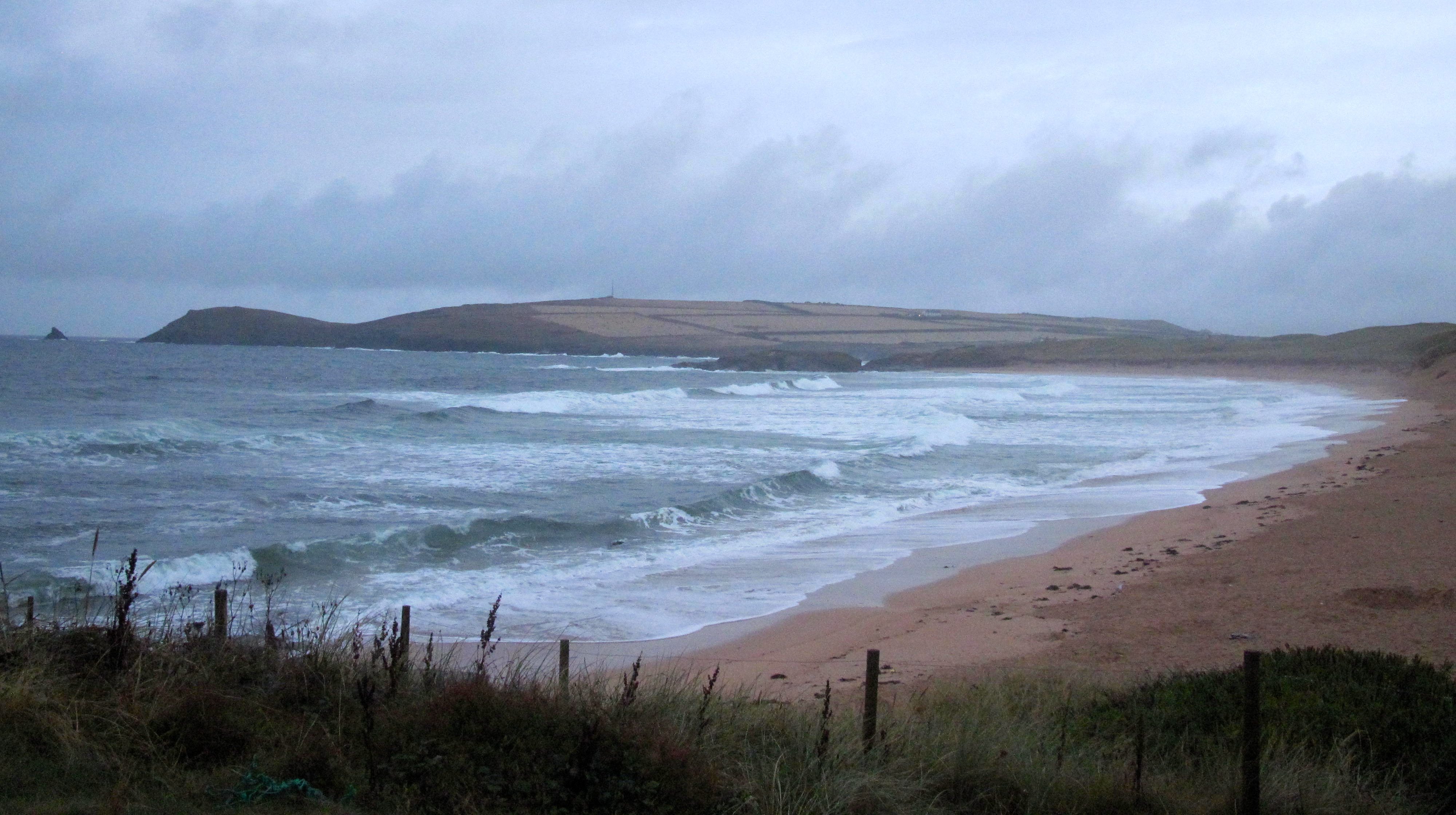 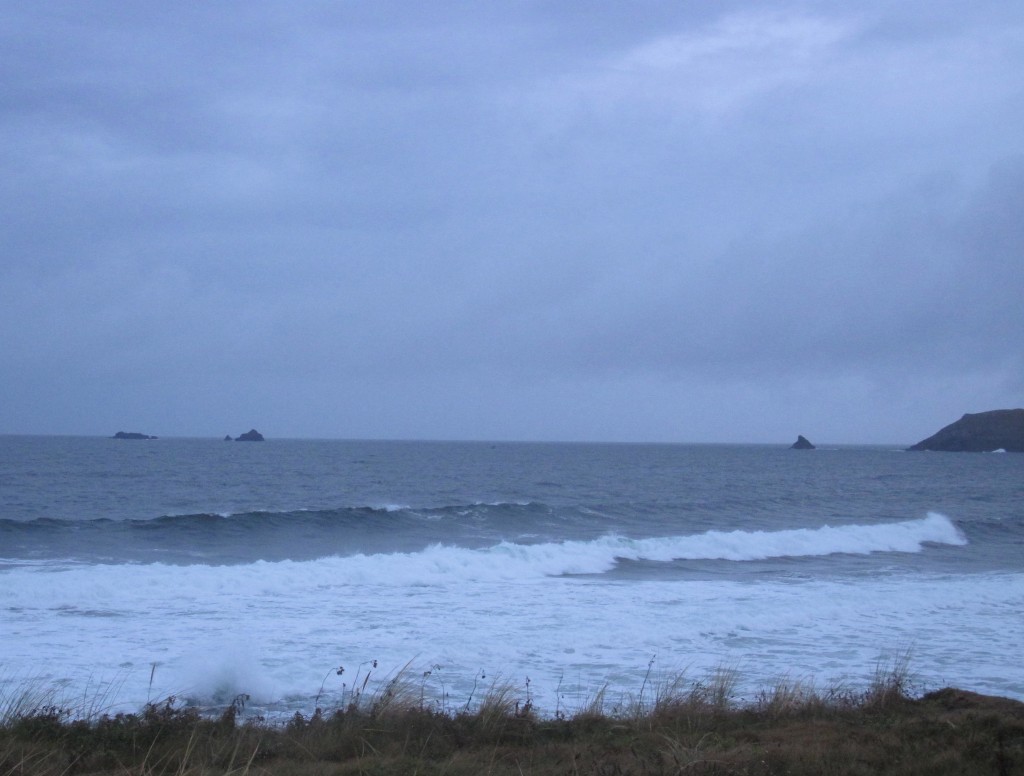 It’s a grey and damp, drizzly and mizzly old morning but there is some surf!
There’s a canopy of dullness enveloping us this morning, the wind light so far, blowing steadily from the south, sou’ west and so putting a bump on the three foot and sometimes bigger wave faces and causing them to break a little earlier than they would if left alone.
There’s a rolling three to four foot swell shuffling along the coast and spinning some half decent three foot plus surf into the bay just on high tide.
The forecasts are predicting a wet ‘n windy one for the rest of the day but the swell should build a little more through the day as well.
So, get the waterproofs on and wax down the short board, ether’s drop-inable waves out ether today!
I wonder whether it’s big enough for Harlyn yet?…. 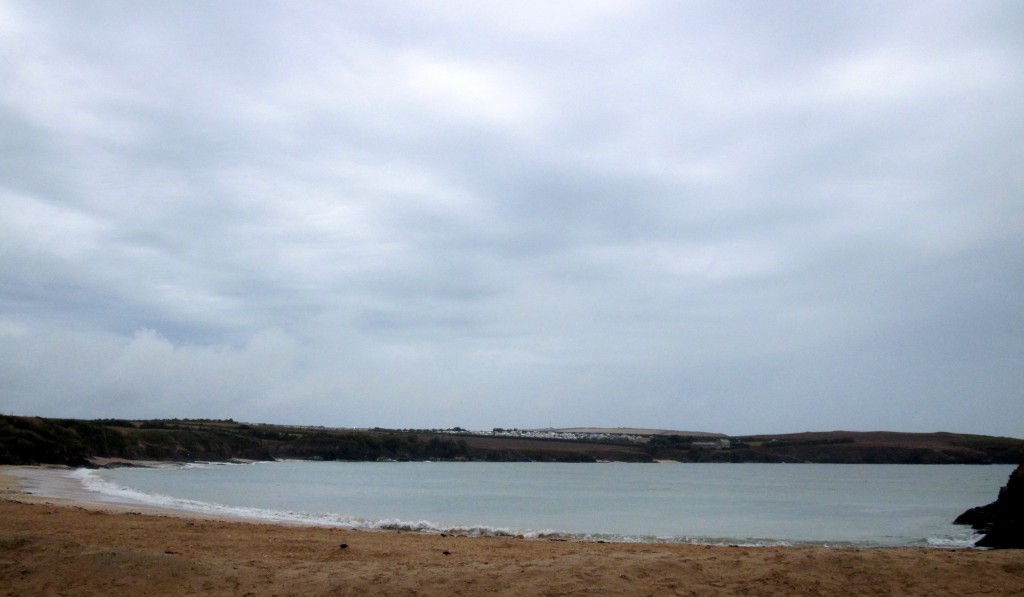 No there’s nothing happening here. Yet.
The tide is just about fully high and so any waves that are rolling in aren’t able to break in that deep water. But the swell is still building and so we should see some clean and sparkling waves as the tide empties out.
The wind is still light yet, offshore here and so conditions are looking attractive.
So now all that we need is some swell to swing in!
Give it till this afternoon. 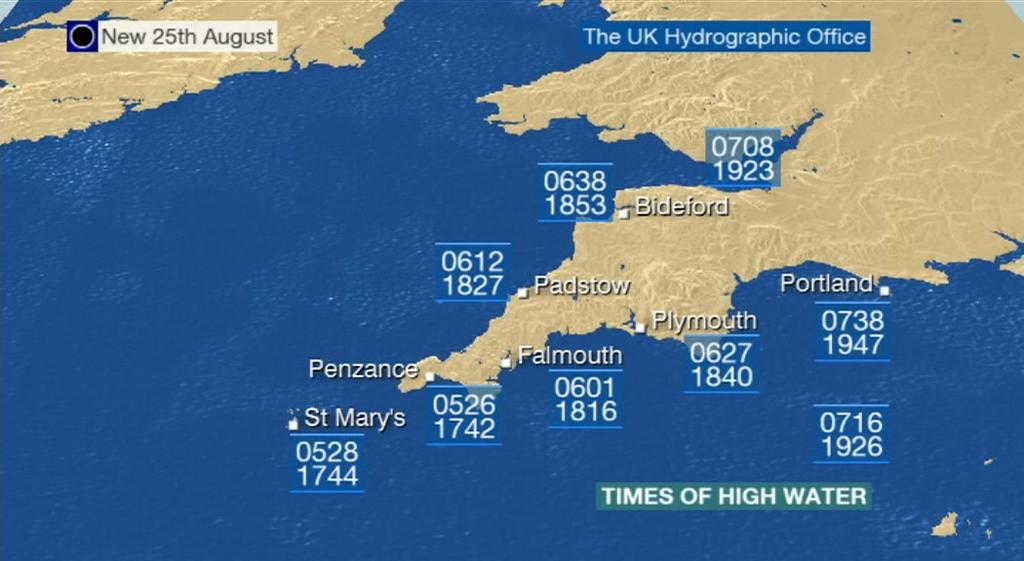 A driving swell, wind supported and reasonably well travelled, is likely to be polishing our beaches today. A half decent and quite solid three to four to hopefully five feet of bumpy surf should be on offer at our main breaks.
The wind is forecast to weaken as we go along which might just allow our favourite surf breaks to start showing some half decent surf but it is likely to stay very much onshore keeping it all a bit lumpy and bumpy.
It will definitely be worth looking at the sheltered spots today!

The Bank Holiday weekend traditionally ends our main holiday season, marking a return to a slower, quieter pace of life as the vast majority of visitors exit the area. This year might show a more gradual emptying, with that extra August week.
And those who do stay on might just finally see some surf! Some proper rolling Atlantic curlers, just like in the postcards!
The week is likely to start with a half decent three foot and building swell rolling in through Monday, the wind mainly onshore but south, going south westerly and so supporting that swell.
By Monday night and through Tuesday we should be enjoying a proper five to six feet plus of growling swell with the wind easing off in strength all the time. We could be surfing Harlyn properly for the first time this summer!
The swell is likely to settle down by midweek, still that rolling, onshore swell, all bumpy and grinding in at the main breaks but providing just enough maybe to provide some cleaner alternatives at the sheltered spots.
And the water is real warm too!
So wax the boards down – surf’s up!
Have a great week, wherever you are and whatever you’re doing!