It’s a bright ‘n breezy one this morning, those picture-book clouds scudding across the horizon in this mild southerly wind.
There is a half decent two to three feet or so of surf washing in as well, an outward bound yacht bobbing in the early morning swell, making its way into the wind as it winds down the coast.
If the wind was only a degree or two towards the east then those waves would all look much prettier but with this fresh southerly there is a bump to them at the moment. I say ‘at the moment’ because there is a chance that the wind will twitch that degree or two to be more south easterly. If that happens then it could just be really very pleasant.
In the meantime the set waves are standing tall and peeling into the bay but the in-between ones are looking a little slushy.
That should improve with the tide though, the headland providing some shelter from the wind and the shape of the bay funnelling in those swells, focussing and magnifying them onto those little sandbanks that are in the bay.
We should be able to enjoy a fun day of summer like surf on a bright enough Sunday morning. What else are you going to do?

Well, we have just received our Pukas Inspiration Project Ts featuring an image of Toby taken by Cheyne and put together by those fine artisans at Pukas in Spain (they’re the guys that make boards for Mr Gabriel Medina), so you might just want to go shopping!
Why not drop in on us? We have loads of new stuff hanging on the rails ready for Summer!
Summer wetsuits from O’Neill, Xcel and Alder are hanging alongside surf accessories from FCS and O&E while Reef flip flops are sat next to Vans beach and skate shoes. The newly launched Vissla range of clothes are alongside rails of Brixton Mfg, Captain Fin Co, Reef, Lost, Coastees and the newly in Passenger range as well as our our own Shop logo’d garments.
We have sunglasses from Bolle, Ray Ban and now the brand new dBlanc (and how great are they!) as well as EightyEight and  Vision.
Time for a new board for Summer?
Then take your pick from our wide range of boards. We have longboards, short board, fun boards, soft boards, finless boards and all sorts! Al Merrick, Haydenshapes, Meyerhoffer, Sol Life, …Lost, Beach Beat, Hawaiian Soul and Webber, we should have something to suit!
And if we haven’t got it, we can get it!
So, drop in on us this weekend if you’re around the area!! 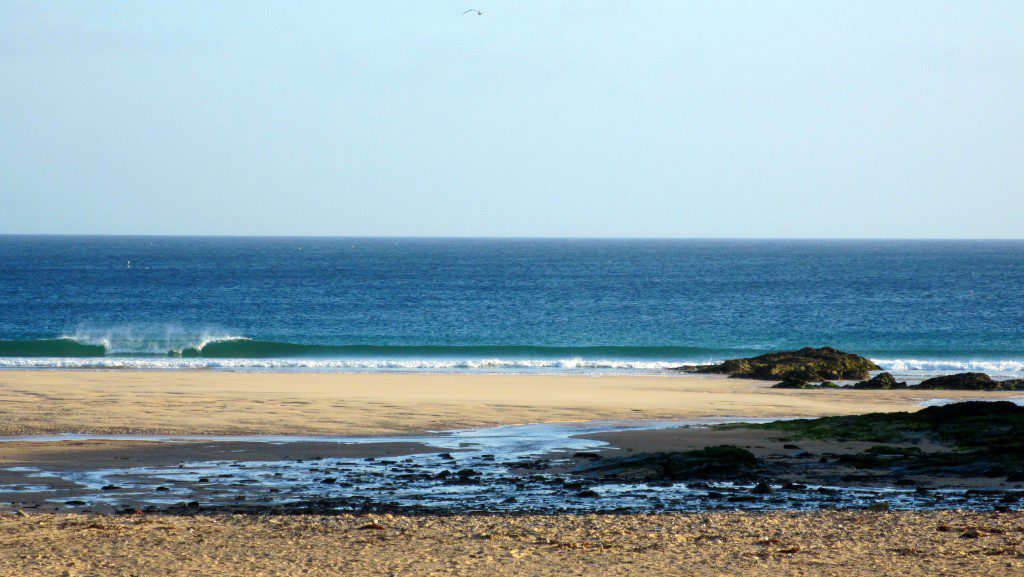 The sea is sharp and clean and very blue this morning at Harlyn bay but there are only ripples washing in again!
Which is a real pity because the conditions would be perfect if any swell was managing to get in to the bay today. Those tiny little waves that are slipping in here, teasingly almost a foot now and again, are immaculately shaped by the wind (straight offshore here this morning) and the sea is looking fabulously welcoming.
But there ain’t much surf, not here, not today!

A couple of feet of smooth swell is still likely to be gently washing our way, maybe a pleasant and clearly lined up couple of feet as well.
And so it’s down to the wind as to how good the surf might end up being. The forecasts are all showing that same southerly to almost south easterly. ‘Almost’ south easterly!
And that could make the difference.
On the one hand if the wind does slip to the south east then we will be enjoying that clean and well shaped sort of surf but, the waves will be held back by that same wind!
But it does look like the wind should be reasonably light though and I think that we will end up enjoying some very pleasant, gliding two to three feet summer surf.
Yep, it looks like it could be fun!

It’s looking like a mixed start to the week with plenty of bright enough weather expected but those showers never too far away either.  And some of those showers are likely to be heavy and thundery!
The surf looks okay with a steady three feet or so of swell set to slide in over the next few days, the wind having settled into a south sou’ westerly pattern, just occasionally twitching to the south east to add some sparkle to that surf.
Monday should start our week brightly with that same two to three feet of lazy swell being guided by a light enough southerly wind, starting out offshore early on, going sideshore through the day and then offshore through the evening again.
By Tuesday the swell should have settled into the three to maybe even four foot range, a bit bumpy in that steady south westerly wind but looking attractive enough in mainly bright sunshine.
And that should be the way of it well into the week! I think that we might just be in for a week of lazy summer days, not necessarily wall-to-wall sunshine but bright enough with enough surf to keep most happy!
Have a great week, wherever you are and whatever you’re doing!