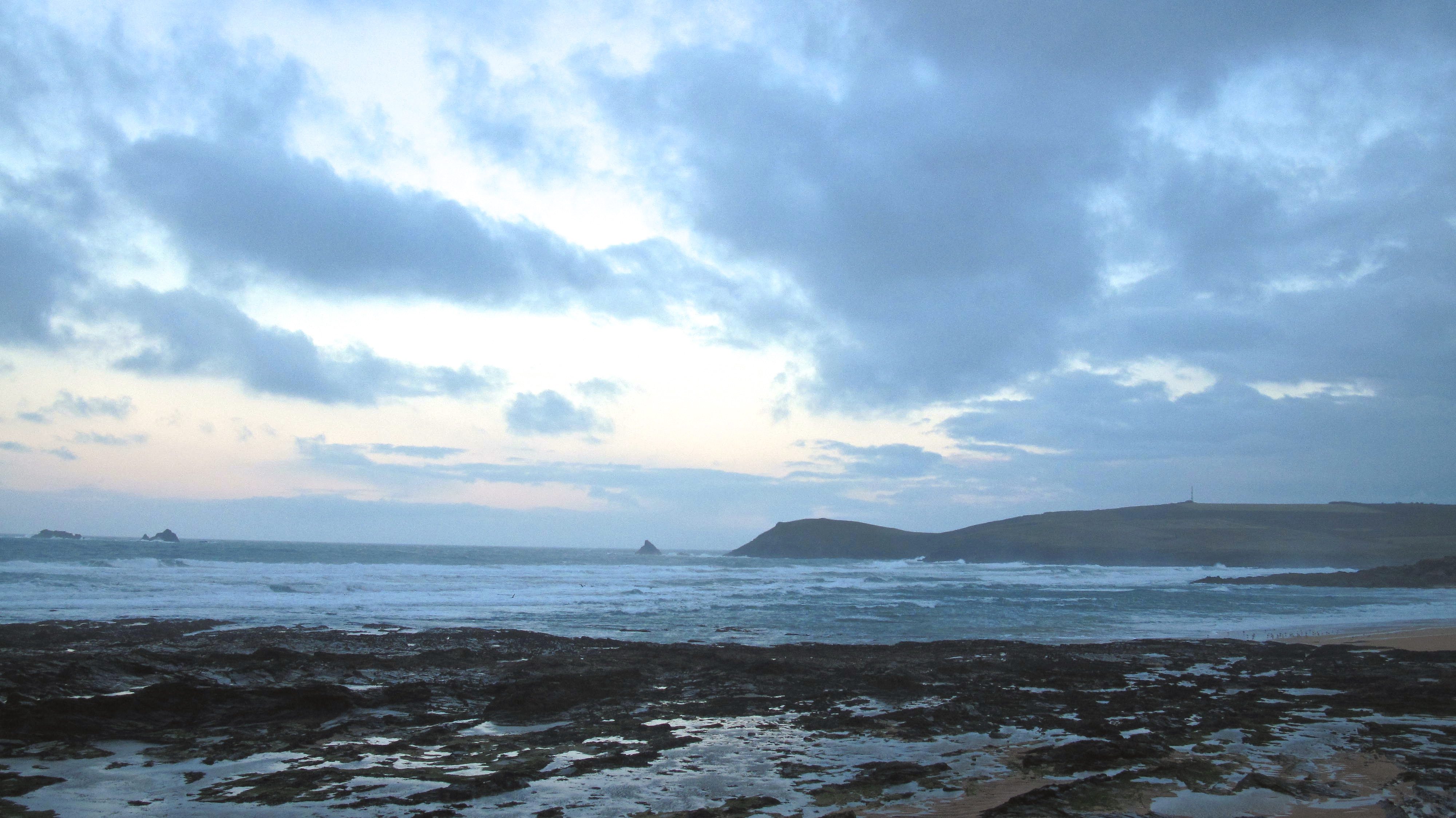 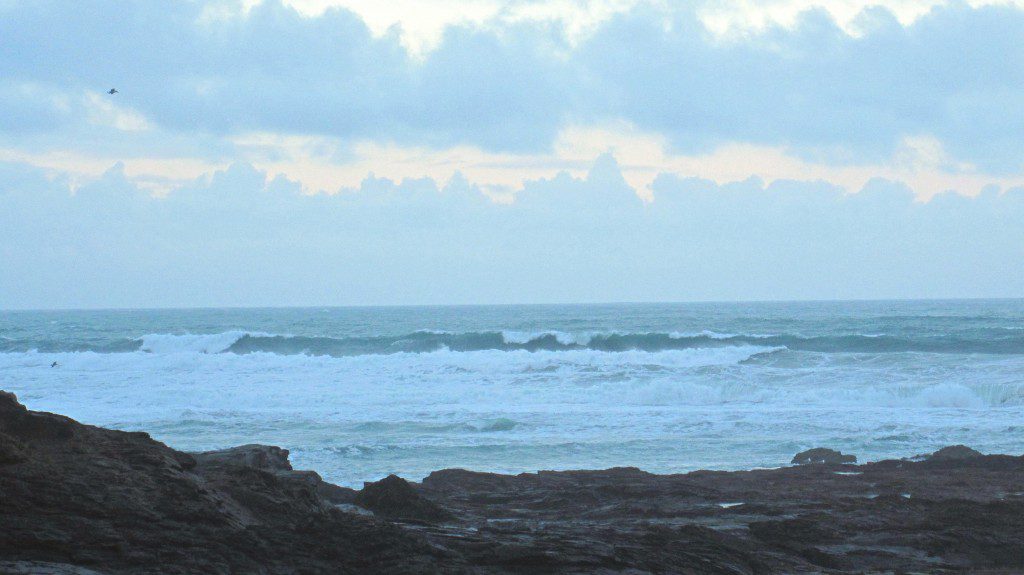 A damp and windy morning is waking us this morning, a gusting north westerly wind tugging at the hedgerows and pushing at the waves while thick and rain filled clouds scud by on the distant horizon.
It is bright enough between those mountainous cloud stacks and the temperature is mild enough (for mid February!) but equally you don’t want to be reaching for the summer gear just yet either.
The surf is a mess, five to six and six to eight feet of mixed up and bumpy stuff bouncing into the bay. There seems to be a couple of swells confusing each other out there too. A steadier five footish swell is rolling in fairly rhythmically while much bigger bumps march through every good while. If the wind was not so strong and not so onshore then it could be really interesting but we are going to have to wait until tomorrow for that!
In the meantime, there are lots of waves and plenty of size to those waves but the wind is destroying them.
Keep an eye on it though, there are forecasts showing a decrease in wind strength through the afternoon and one or two are showing a switch to almost offshore! But it will probably be dark by then! 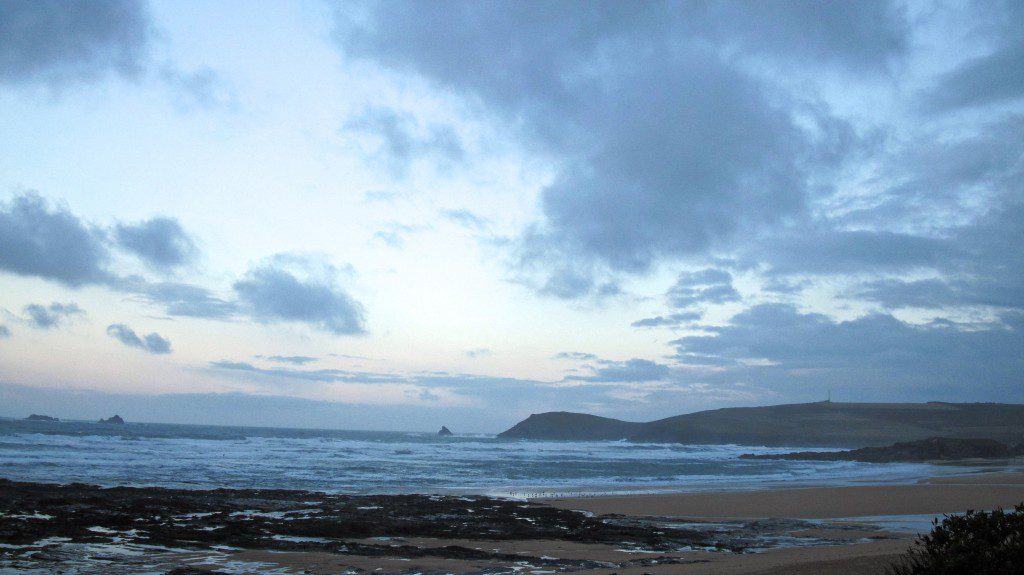 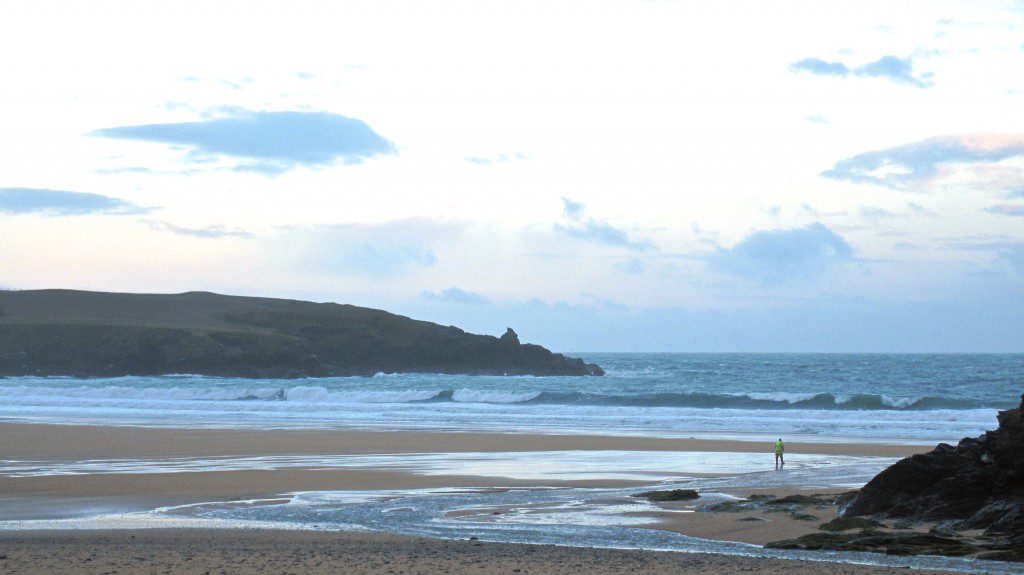 That brisk north westerly wind is blowing straight into the bay this morning, churning those four foot plus waves.
It’s not great for surfing around here this morning but there are waves and they are rideable. The younger guys are going to have fun launching big airs off those crashing ramps.
And the forecasts are showing the wind to drop off as the day rolls on, so maybe by this afternoon, on the dropping tide, there could be some fun ones to ride.
Or there’s always the ‘goose chase’ run down to the south coast for something cleaner?

Mmmmm, it could be good today.
It could just be very, very good today!
A three foot swell building to five foot plus with a mid teens wave-period should be pushing through light offshore winds. Throw in some bright and cheery mid Winter sunshine and where else would you wish to be?
Yep, it could be good!

After a week of gentle and clean conditions, low pressure is about to move in and shake everything but just for a day or so.
The surf and winds increased through Friday, the surf going from mediocre in size to big during the day, the wind increasing all the time.
And that wind has switched to the north west for Saturday, pretty much onshore everywhere along this coast, making the far coast an attractive proposition. But that wind should ease through the day dropping in strength to not much than a breeze by the afternoon. I’m guessing that the size and power of the swell will demand an offshore to clean and organise an otherwise very mixed up swell but that might just happen too but maybe not until after dark!
By Sunday though, that wind will have eased and switched to the east and that is offshore!
The swell should still be thundering in with another new swell pushing through the afternoon while that wind should shape and organise it all to eventually be just the way we want it to be!
That surf could just be very, very good on Sunday!
Have a great weekend, wherever you are and whatever you’re doing!