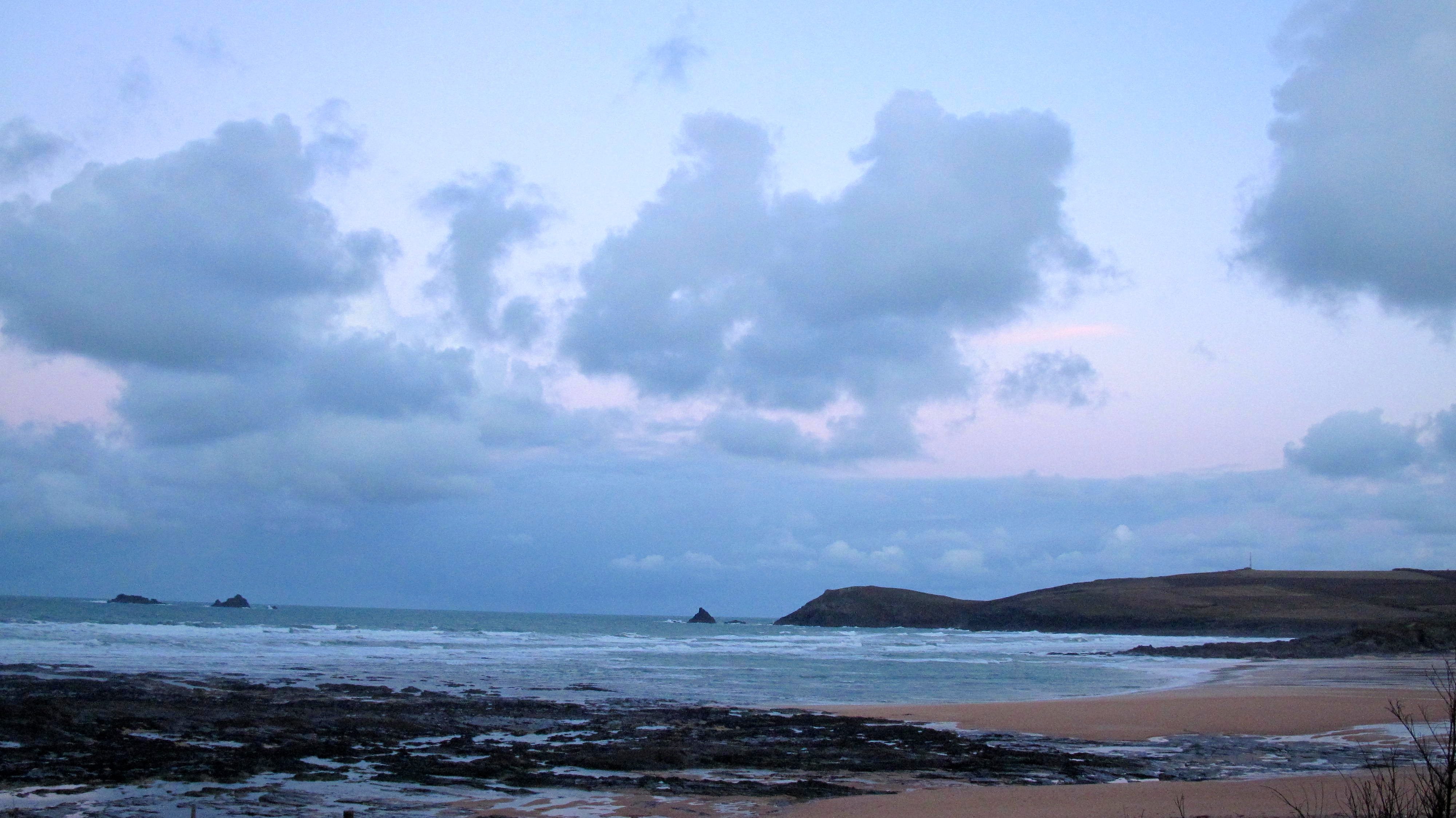 Brrr, it’s a cold ‘un this morning with sleet and slush laying on the road, tyre tracks giving away the slipperiness.
The wind is still whirling in, a brisk westerly, with maybe a touch of north to it right now, those squally showers stinging if they find any exposed bodyparts!
And so the surf is rubbish again, three to four feet maybe, a mix of sloppy and slushy, grey and mushy stuff pushing into the bay.
Saying that, there are some sets breaking off the back of the Reef that are looking more attractive, a lumpy and sloppy but quite rippable left-hander slipping through every now and again, calling to be surfed! If it was summer it would be busy but today it is all pretty much deserted!
The wind is forecast to slip just a little more to the south west through the day and so maybe Harlyn could get good. Let’s have a little look-see!

We are clearing out a whole bunch of wetsuits, so it could be worth calling in for a look if you do brave the cold temperatures and venture down this way! 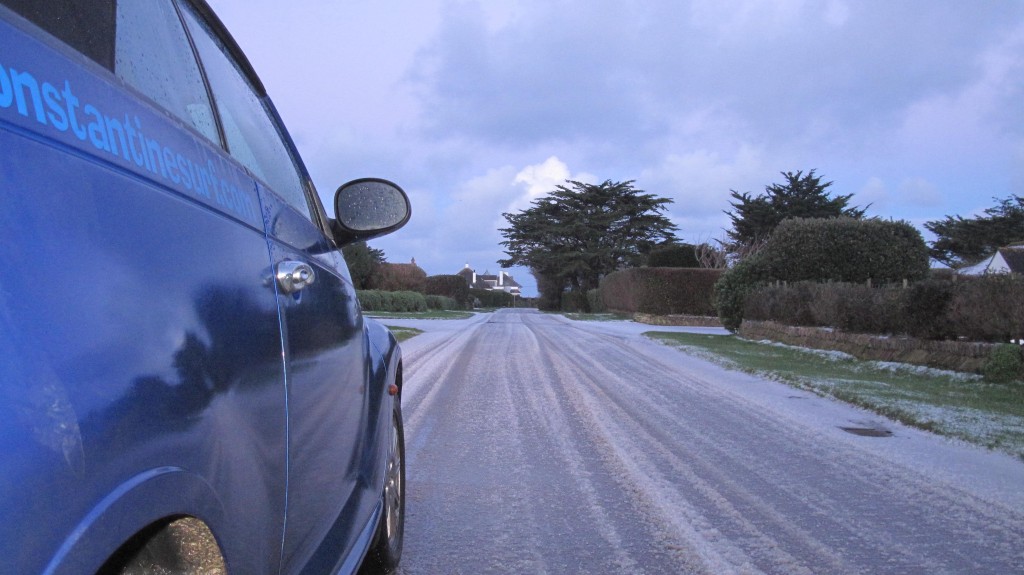 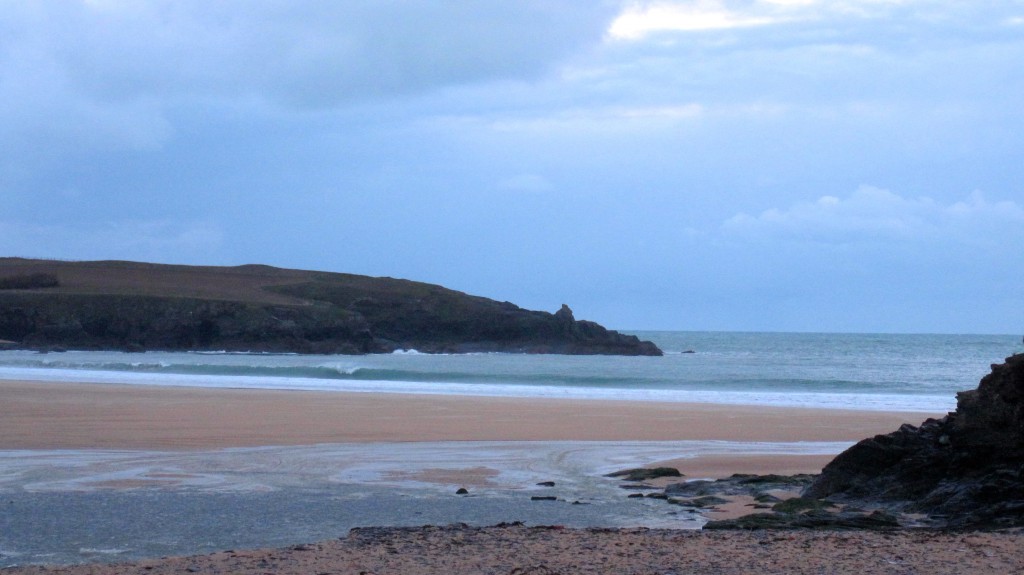 The wind is getting in here too this morning, the two to three feet of low tide surf being pushed and bumped into a bit of a sloppier surf than you would want.
But the tide is on the turn and the wind is forecast to slip just a little more to the south, while that sky over there looks to be brightening.
So it could yet all improve and if (when) it does then it should be fun. Only small but cleaner and more organised.
It should be worth a look back later anyway.

A straight north wind is set to blow today, so that’s probably going to be cold! But some of the forecast sites are showing that wind having a slight twitch to the north east and that could be just enough to bring some shape to the surf at our main breaks.
It is probably going to be three feetish at our favoured breaks, probably onshore and mushy. But maybe, just maybe, it could clean up as the tide rises through late morning and it could just end up being fun!

Those strong winds are likely to continue to dominate through the weekend. Gales and storms continue to line up to blow our way well into the start of next week.
And so Harlyn is the place to check locally again.
Our winter sanctuary and home to some bowling right-handers amidst a host of thumping close-outs! You have to be nimble of foot and sharp of mind to really enjoy Harlyn, especially at low tide. But it is our winter salvation, the place to head for when most other places are blown out.
Saturday will see those fresh winds blowing smartly from the west, needing only the slightest of nudges to the south to be blowing clean offshore at Harlyn but maybe not quite managing it until later. We’re more likely to be enjoying three to four feet of thick and lumpy Harlyn through Saturday, just a little smaller on Sunday but with a more direct onshore wind.
Sunday might very well be another South Coast Sunday, that northerly wind being more offshore at a lot of breaks over there but maybe, just maybe, managing to slip to the north east through the afternoon to light up our preferred breaks!
At least the start of next week is beginning to look calmer and cleaner on this coast anyway.
Have a great weekend, wherever you are and whatever you’re doing!