It’s bumping through here this morning, way bigger than I was expecting and with a light offshore (south easterly) giving it all that shape!

Set waves are peeling across the back of the Reef, the faces a bit fat even with the offshore but peeling forever. And those same set waves are breaking outside Booby’s an hour or so after high tide, big peaks stuttering and reeling off, vertical and hollow. It does look like a challenge(!?) of a paddle but there are some reeling waves washing through.

After saying all that though, there are probably going to be places breaking way better than here under these conditions this morning! Wherever you go though, I’d get on it fairly quick, that wind is going to change, although forecast to stay light. And this swell is likely to gradually ease off too. 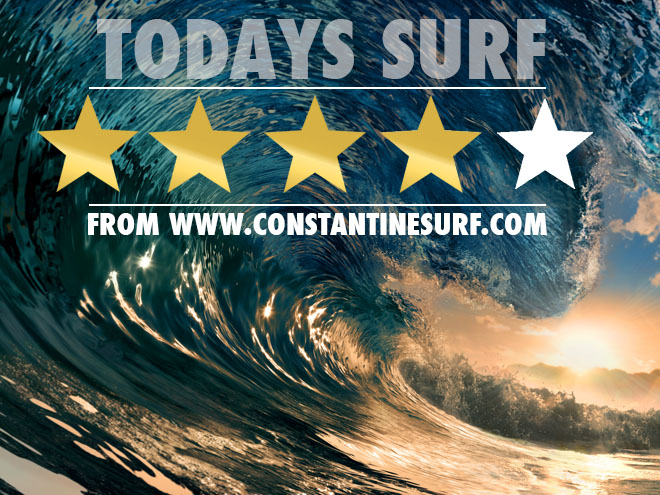 It’s looking fabulously good around here this morning too!

It is all a bit overcast, maybe a little sullen, definitely grey but so far pretty dry (especially after those earlier downpours!

There’s two out and a few more on their way but it shouldn’t get too busy, most places along the coast are going to have waves today, so it’s just a case of choosing your preference!

The swell is likely to have dropped to not much more than four feet or so, while the wind is likely to slip to the west or south west.

So our choice locally is probably going to be between three to four feet, lumpy and bumpy Constantine or other west facing beaches or small but much cleaner Harlyn.

At least we have some choice!

Surf Forecast for the weekend

A solid swell is going to be rhythmically beating our shoreline for the next few days at least, slowly dropping in size but hopefully staying big enough to be fun all the way through.

A steady six to eight foot swell is expected to end the week, all the stronger for its mid-teens wave period count. You’re going to feel the strength and speed of those waves.

The only frustration (as always) is likely to be the wind.

We can expect mainly south westerlies narrowing those surf break opportunities, with just a little window of opportunity for the main beaks to shine, early on Saturday morning. Otherwise, it’s looking like another Harlyn weekend, a little smaller than it has been but big enough with mainly offshore boomers and snappy beach-wide close-outs to keep you on your toes!

But then, those few that peel, the ones that reel off the rock, they make it worthwhile! Sometimes.

It’s looking really mild too, well, for mid January anyway! And although we are going to see plenty more of that wet stuff, there should be some bright bits in amongst it all as well!

If you are over this way, why not drop in on us and check out some of the bargains that are on the go!

Have a great weekend, whatever you’re doing!