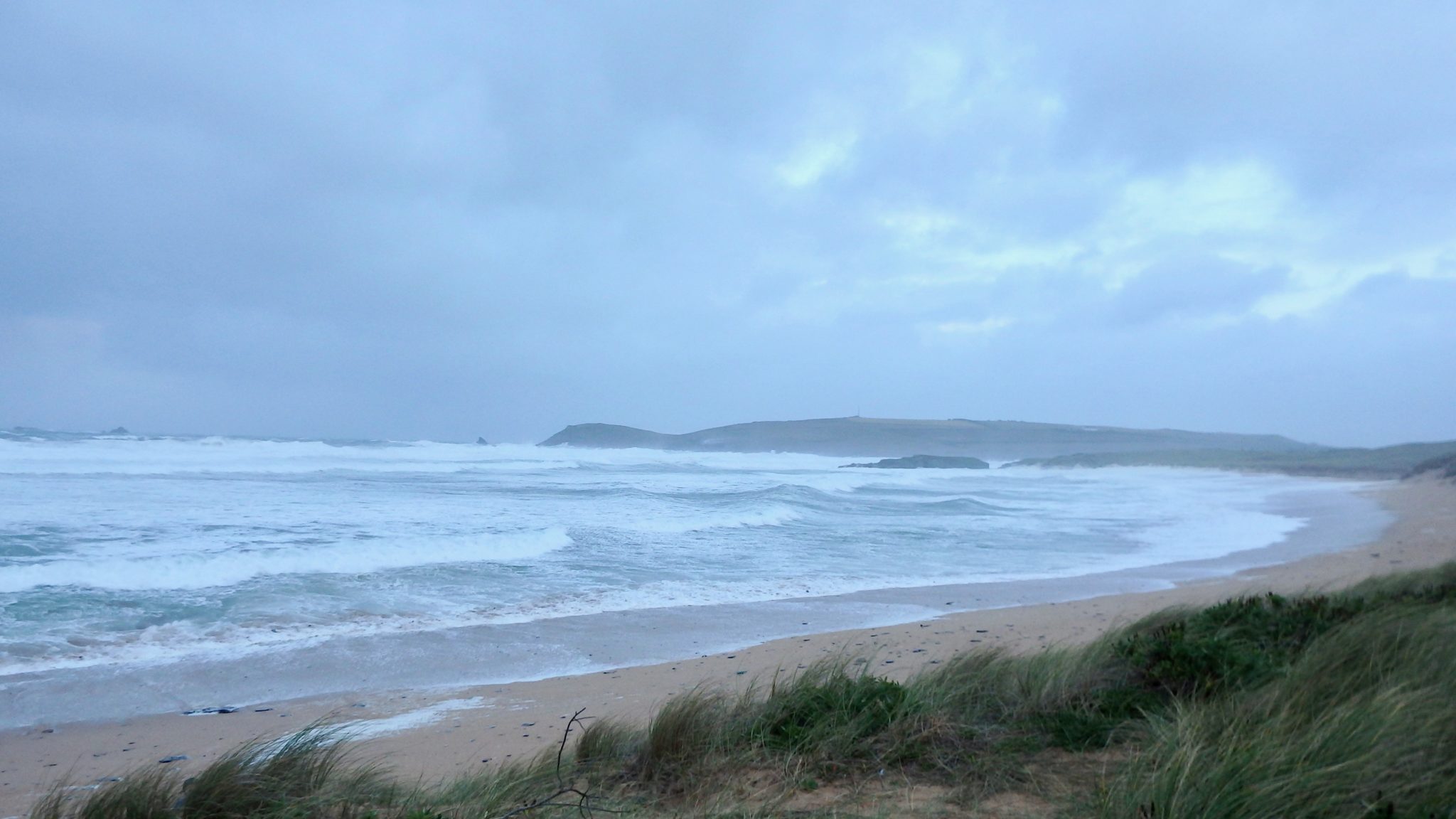 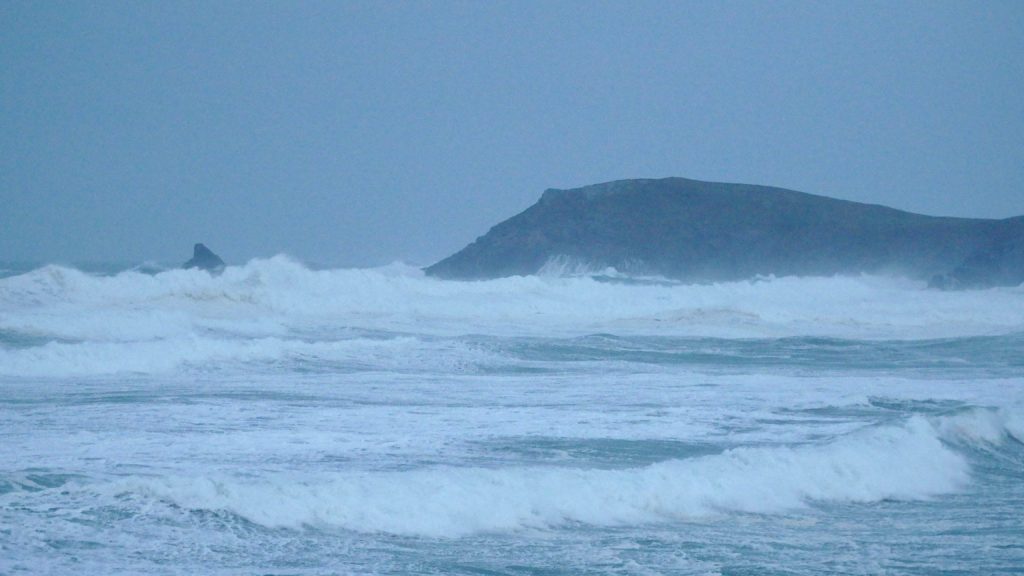 The wind is screeching across the headland and those wild waves are roaring into the bays as Storm Brian makes landfall this morning.
Although the hedgerows are bending and the marram is alive, it is fairly bright and dry in between those storm squalls. Brian doesn’t seem to have that brutality that some of the other storms unleash as they track our way through the winter months.
Well, not yet anyway!
The surf is wild though with huge mountains of storm swept waves rearing into the bay.
It is fabulous to watch but you don’t want to be getting too intimate with it! 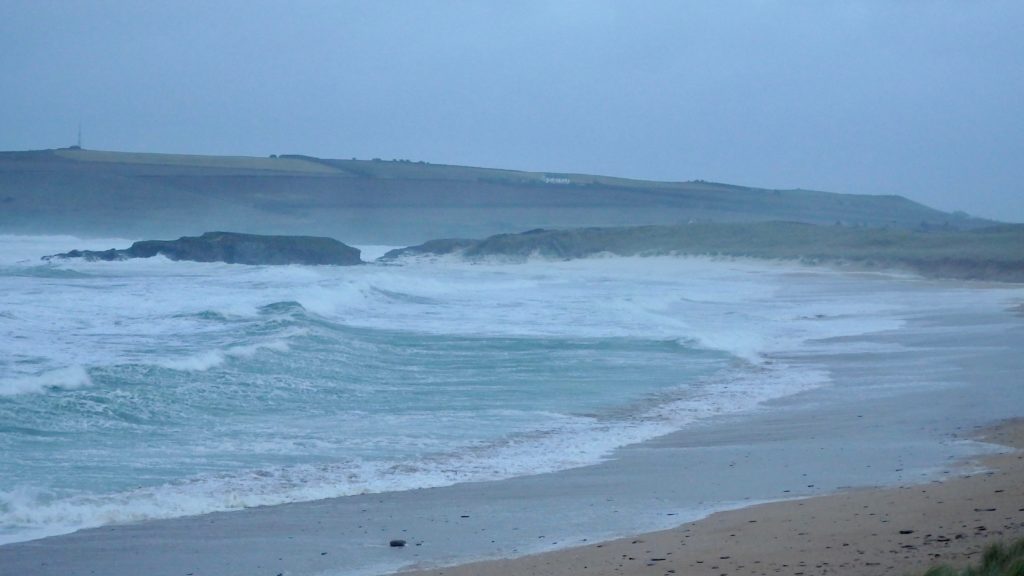 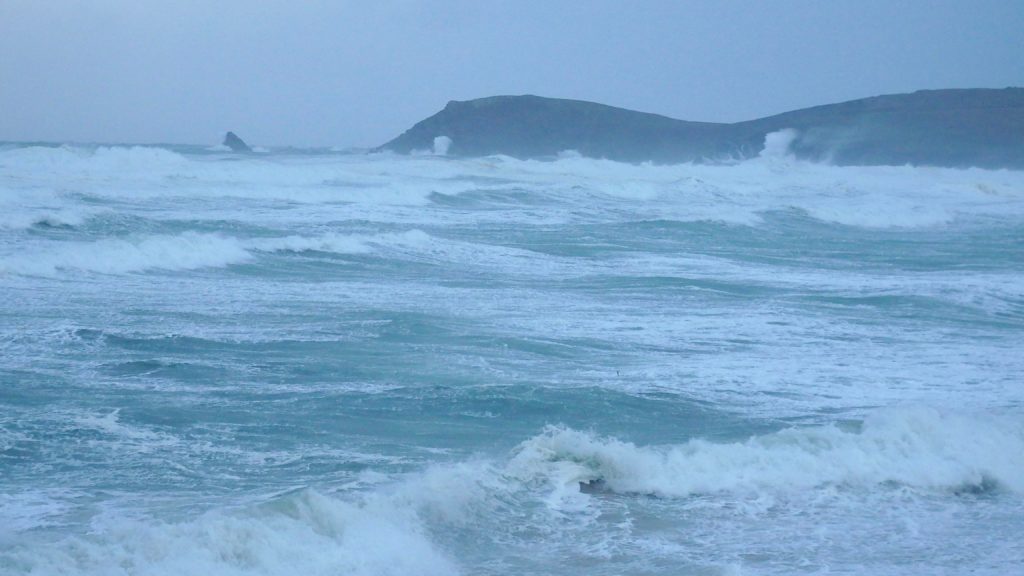 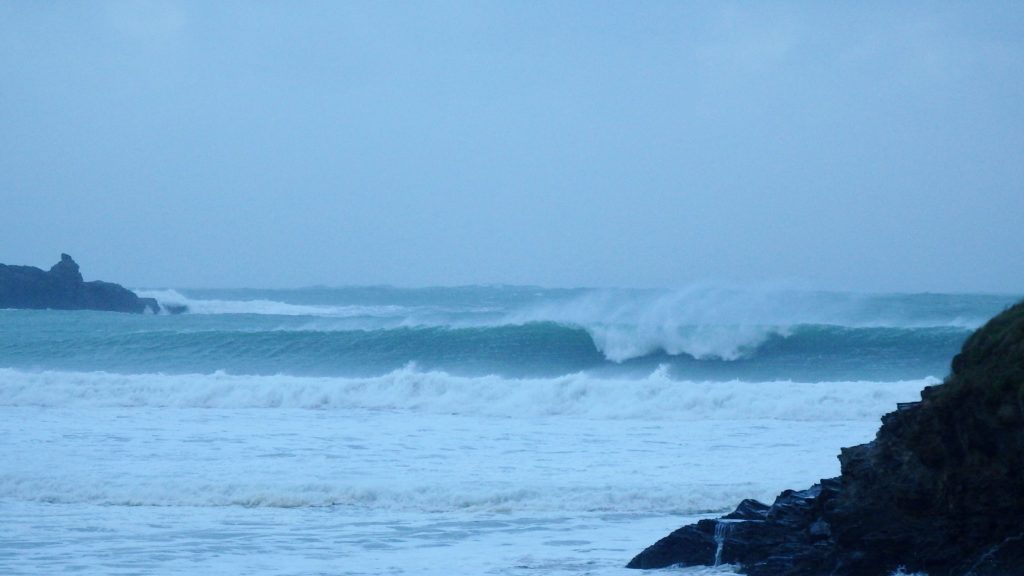 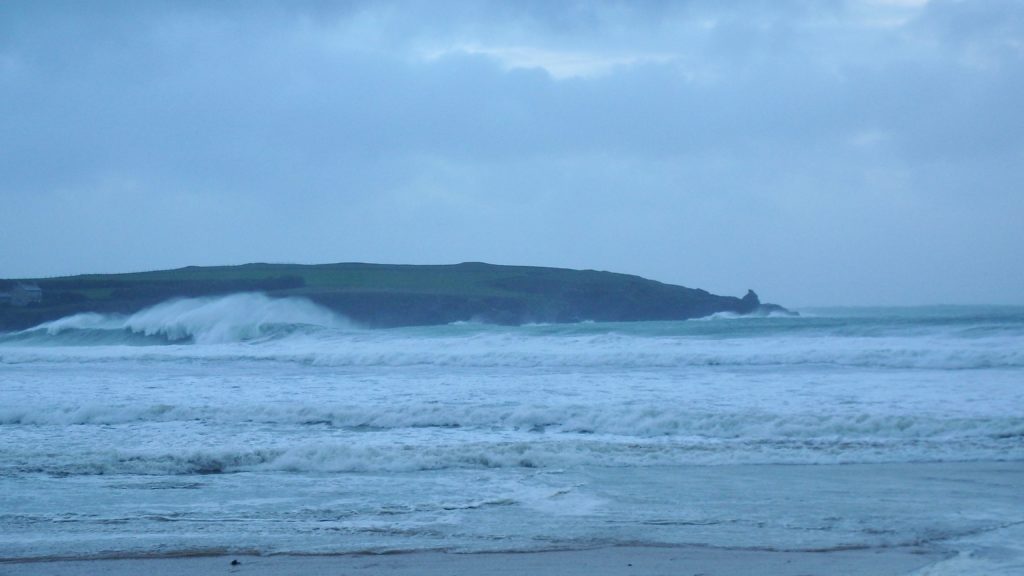 Big and majestic waves are sweeping in the bay this morning, eight to ten feet of raw energy unleashing in the depths of high tide!
The guys have called the 7 Bays Surf Classic ON with a 10.30 sign in at the Farmers’ Arms and an expected 11am start.
Conditions are going to be testing with bigger and hollower screamers grinding through the shallows of lower tide Harlyn! 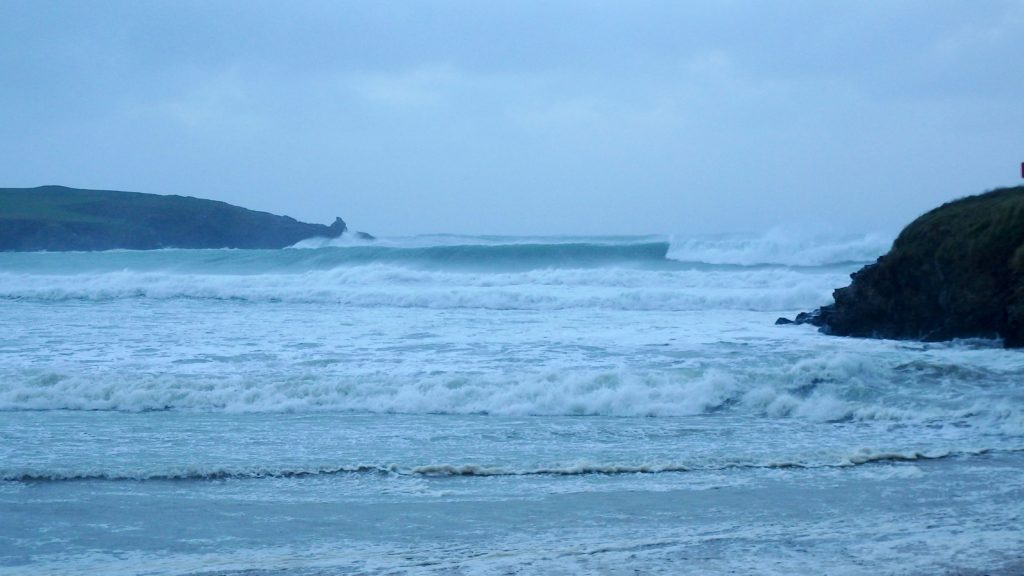 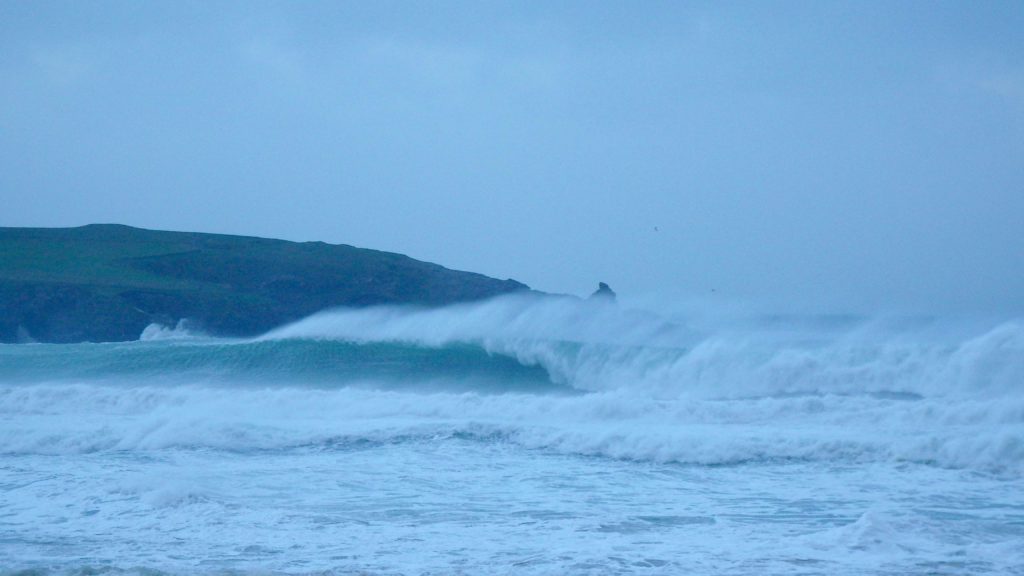 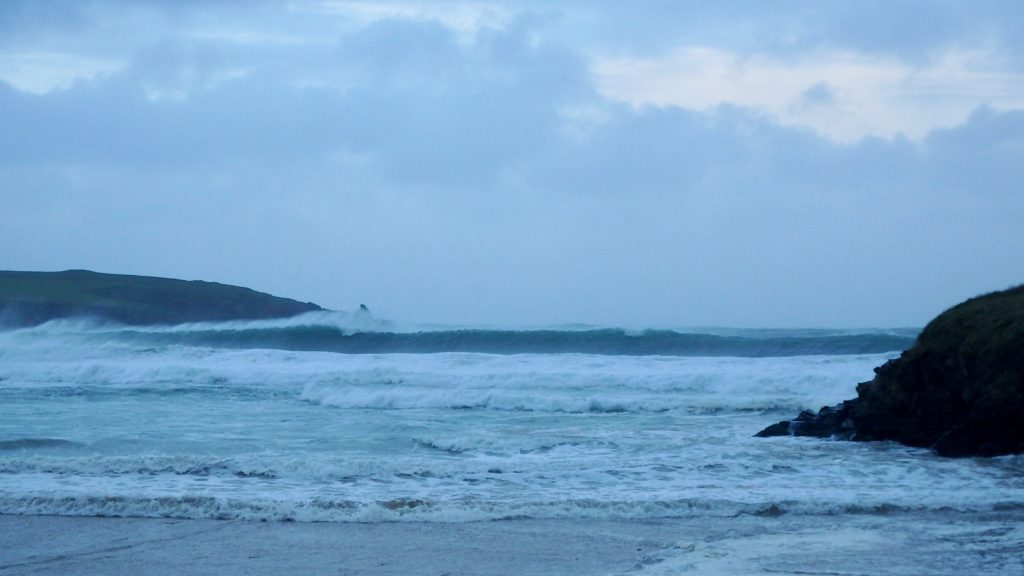 The wind will have eased back in strength but a brisk westerly is likely to be messing up the five to six feet of windlassed swells.
It’s not going to be great nor as exciting as Saturday’s show but with a bit of searching and seeking you should be able to find some cleaner waves to play in at those sheltered spots.

Big, big surf and stormy winds are going to blast through again this weekend!
Saturday especially should be filled with huge and pounding surf, coinciding with some big Spring tides too. Add those storm force onshore winds and you have the makings of some big and dangerous conditions, so take it easy even if you’re just storm watching. Those waves should be powerful and will run a long way along the shore with enough power to drag you a long way out of your way if you’re not careful!
Those stormy conditions should ease through Sunday, a fresh westerly wind steadily blowing onshore as the surf halves in size and then halves again.
So to get some clean and surfable, non life threatening waves to surf you will probably have to travel, seeking out those tucked away mist spots that only break in the very biggest of conditions and can handle those storm force winds.
There are a couple of localist spots that should be lighting up but it depends on how strong that wind is and how long it lasts.
Have a great weekend wherever you are and whatever you’re doing but take it easy out there too!