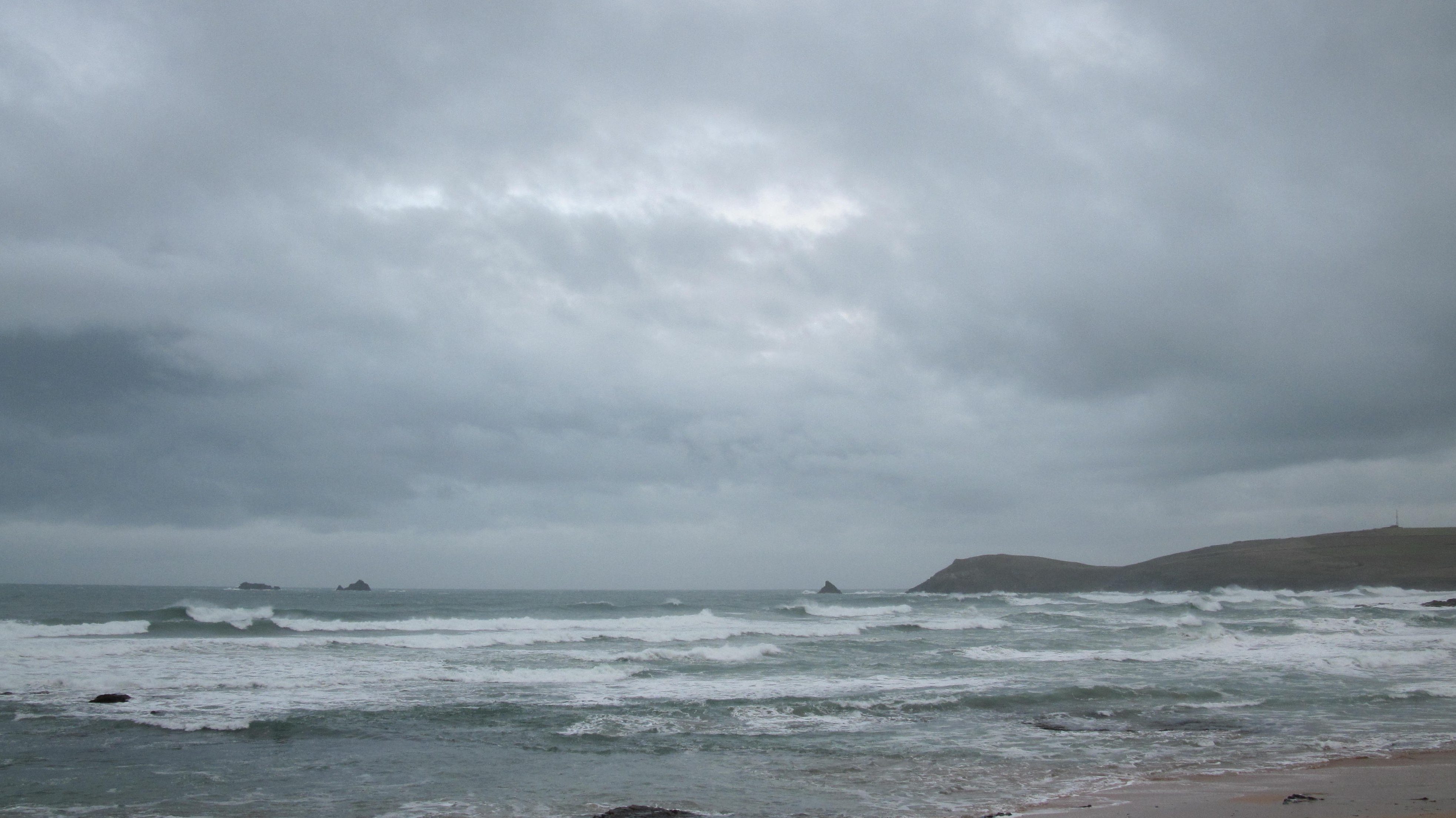 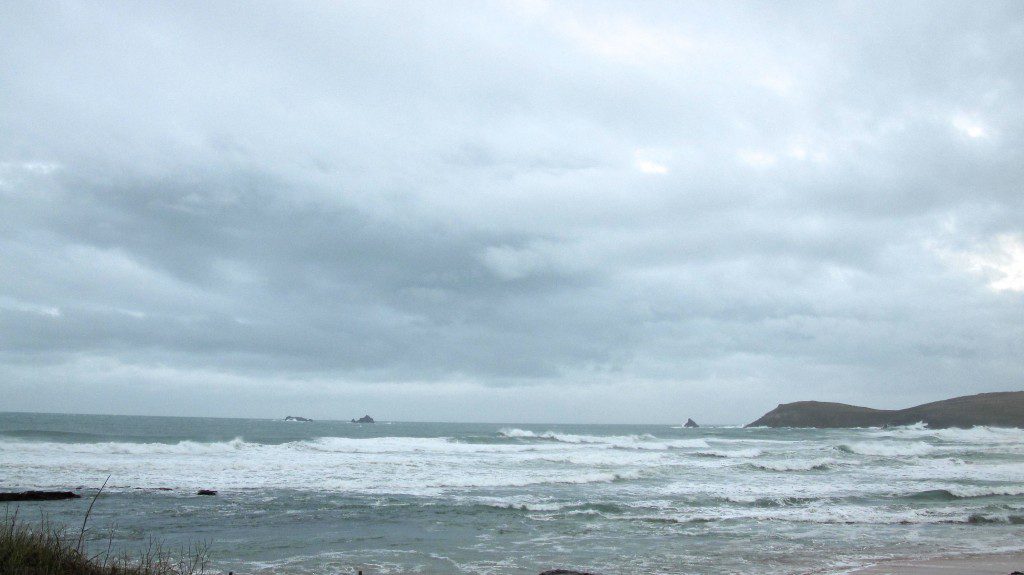 There’s a solid, six foot plus and booming swell rolling our way this morning, a big wave-period swell with slow motion set waves.
It doesn’t look that big until you see those set waves stand tall before erupting over the shallows.
If only the wind was kinder, it is close, with a south sou’ westerly gusting across the bay but those gusts are strong and are pushing the waves around a bit. I wonder if somewhere like Fistral might just be cranking this morning, somewhere facing just that degree or two further away from this wind?
But here right now is a bit of a mess. The waves themselves are quite clean, if unpredictable but there’s a swirling mess of water to get through to get to those waves.
And the sky is a bit brighter than it has been over the last few mornings, there are still loads of clouds about but there are also blue bits around them.
Let’s have little look at Harlyn, it should be pumping over there:……. 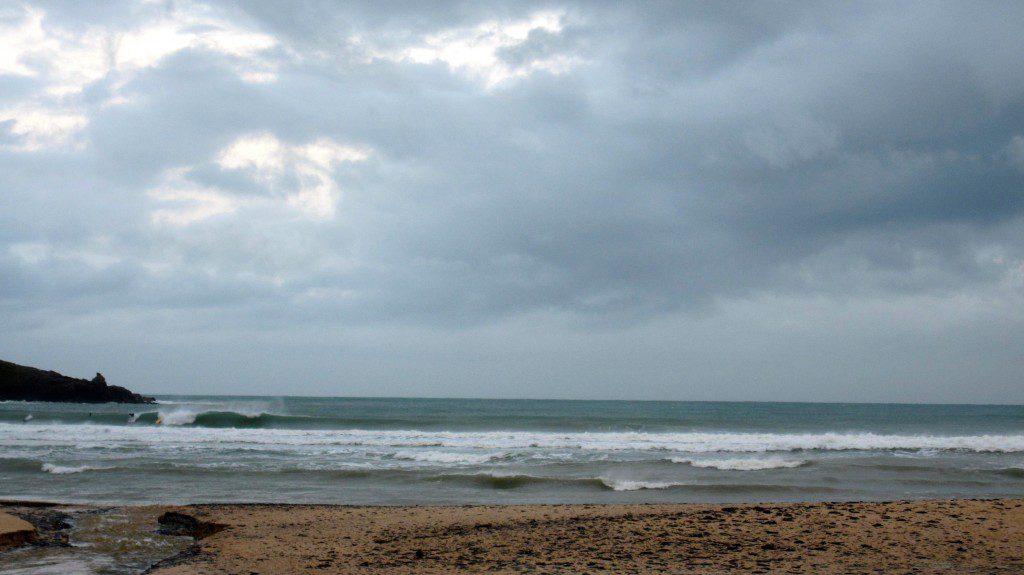 Ah yes!
The frontline of the car park is already filled, always a clue to how the surf is, less so on a weekend but still an indicator!
And the surf is pumping.
A very setty three to four foot swell is pouring into the bay, minutes between the main sets, longer between those set-sets! And those bigger sets are cleaning up the line-up, washing boards and riders beachward every time.
It’s a shame that the tide is dropping. Although those set are still grinding in, they are going to be harder to ride as the tide lowers.
This afternoon’s tide should produce some thumping waves – as long as that wind behaves itself!
But right now it’s four feet plus, offshore and pumping! 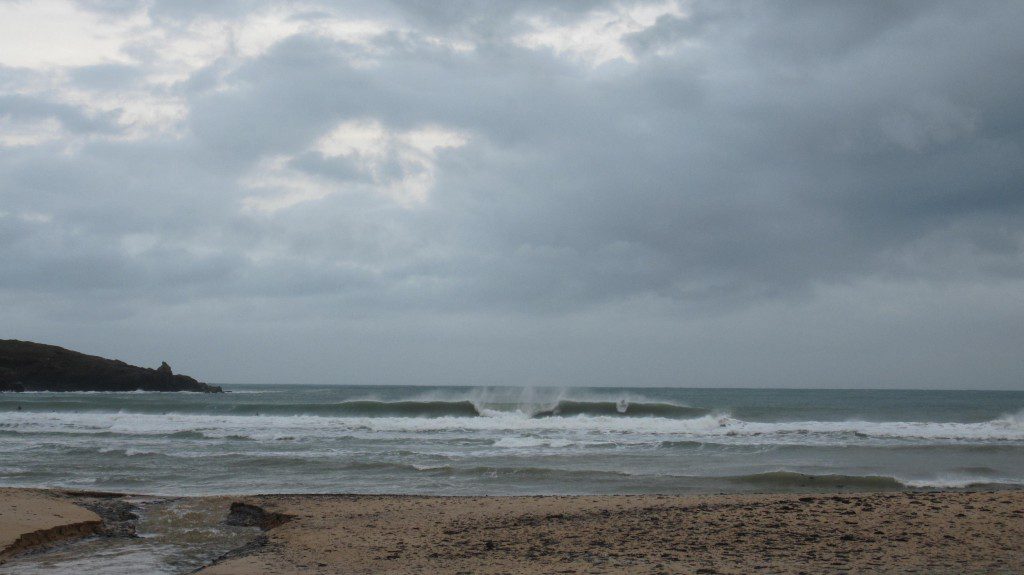 More rolling swell is expected to continue to wash our way, the wind maybe veering a little too westerly to be great but still allowing Harlyn to shine.
The swell might have settled down but should still be comfortably in the four foot plus range, allowing a solid three foot plus Harlyn. It is probably going to be cleaner first thing in the morning and bigger in the afternoon but there should be surf all day.
Those showers are still going to be blowing through occasionally throughout the day!

It was a windy start to the week with those strong north westerlies battering swells onto our coast but that finally changed as we went into the back half of the week with the wind backing through 180 degrees of the compass and settling to the south and west.
Those south westerly winds are just as strong as the northerlies were but are milder (if not drier) and are also allowing more surf breaks up and down the coast to maybe come into play. That wind also tends to support any swells out there, pushing them along and allowing them to build in strength as well as size and so it could get quite big into the weekend too!
So, for the next several days, it looks like Harlyn is going to be the place to be locally with those thick and building swells swinging in and unloading against that same wind.
Four foot plus barrels await for quite a few days!
Have a great week, wherever you are and whatever you’re doing!