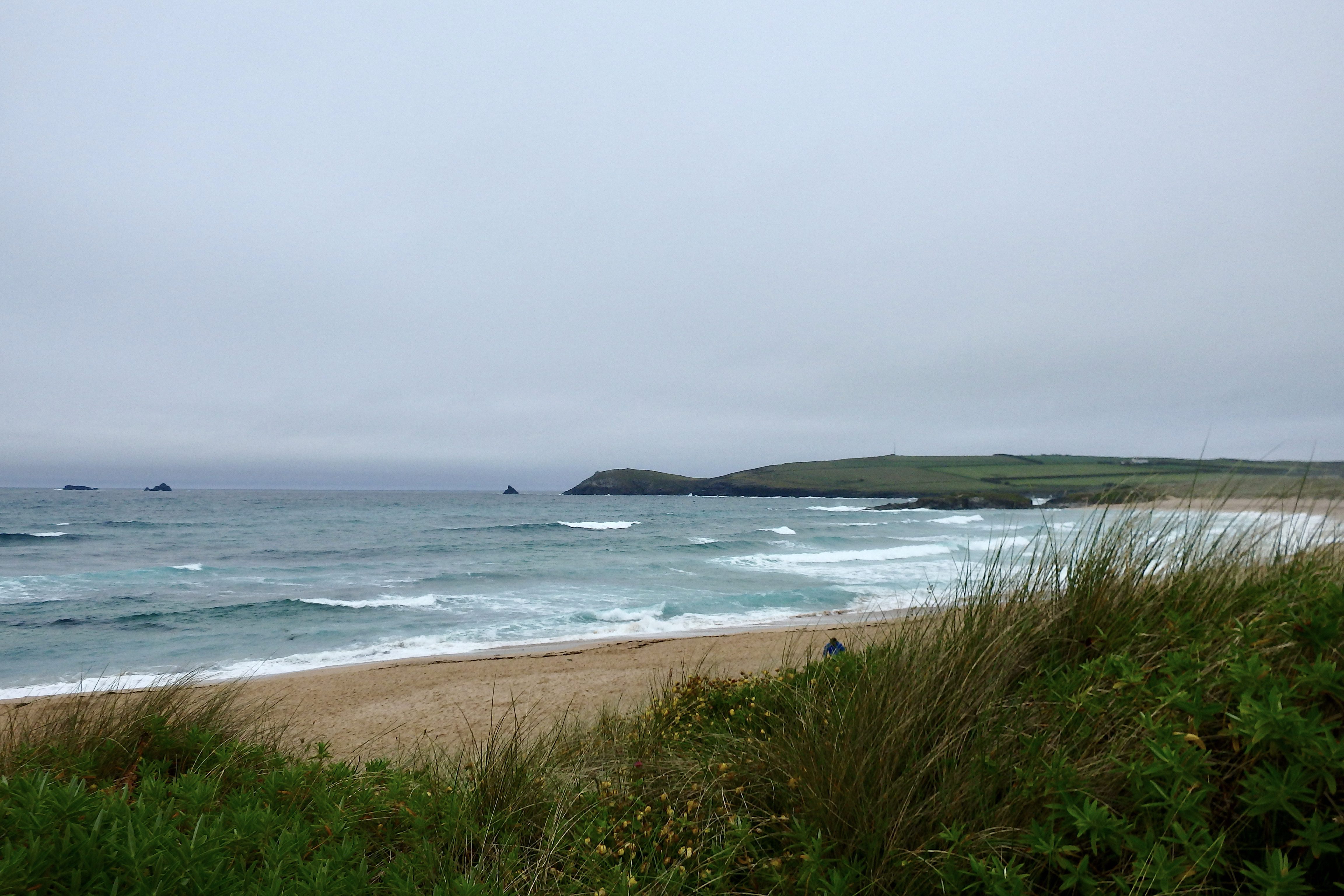 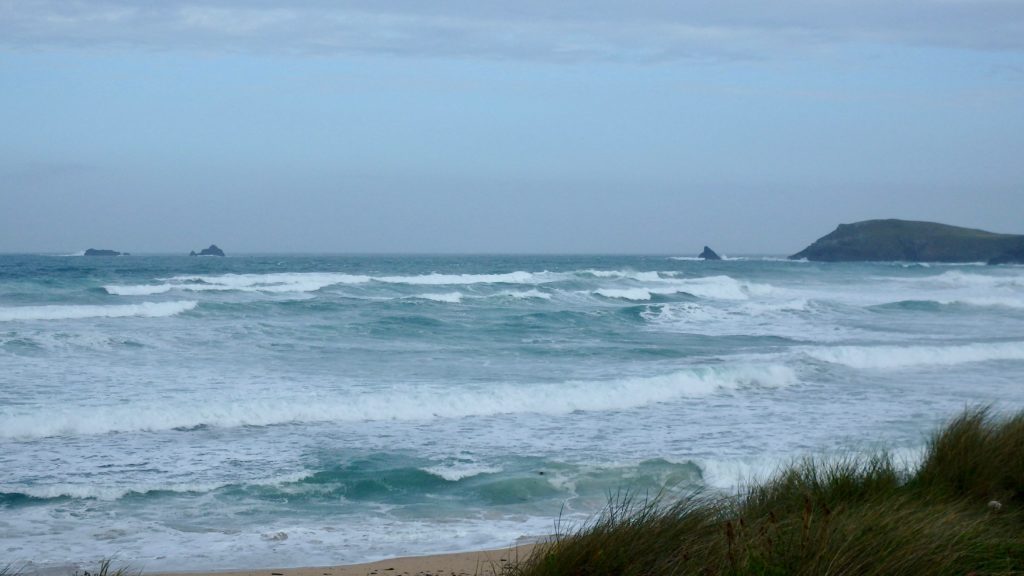 That south westerly wind continues to blow hard onshore this morning but otherwise the temperature is pretty mild and the sky is brighter than it has been, although there are some grey lumps of cloud just over there and there, so it could get wetter at any time!
But if it does it shouldn’t last too long, it does feel as though the weather is settling down at last.
The surf has picked up overnight, six to eight feet of grey and turquoise, thick and lumpy waves are thundering into the bay, making a lot of noise and creating a lot of spray but not really that rideable.
It does have more of that wintery look to it as well, although the water temperature is a relatively balmy 15 deg C, matching the air temperature right now.
So, that south westerly blow with a thundering swell combo usually indicates a good day at Harlyn, so let’s go and have a little look…….. 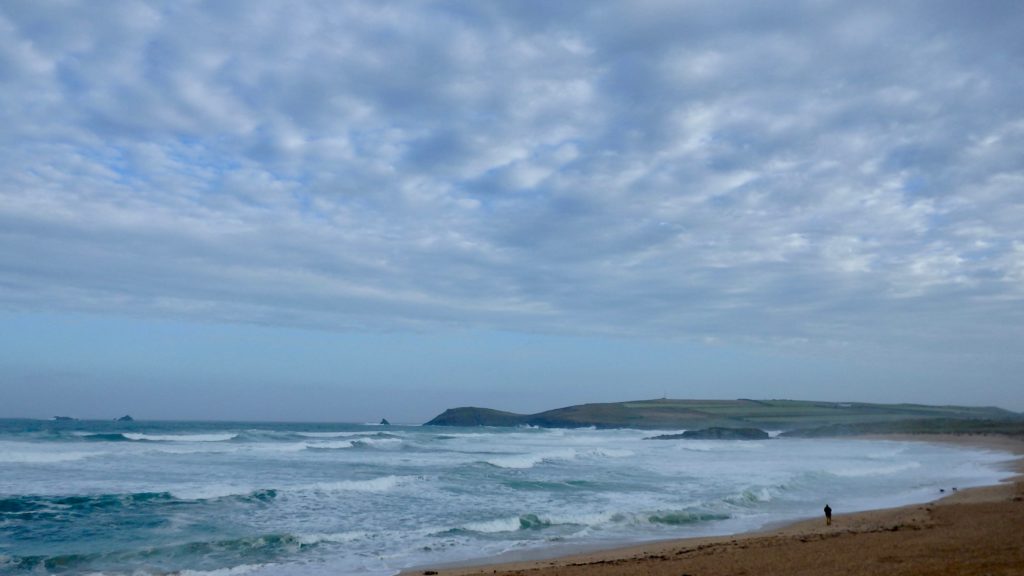 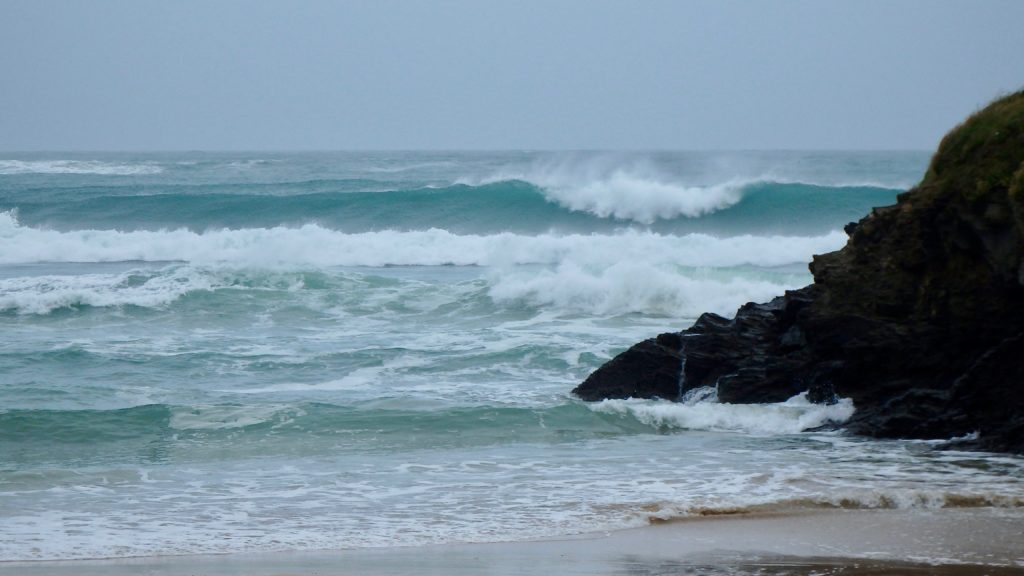 The waves are real setty here this morning, if you pull up between sets you might think that it is only a couple of feet or so but give it a good few minutes and you’ll see those real sets march in.
Four to six feet of thick and grinding, bumpy waves are pushing hard into the almost full tide bay, the lightness of the sun making it a little more appealing.
The tide is almost high right now, so we are likely to lose a bit of size as the tide drops out, although I suspect that this swell hasn’t peaked just yet. So we should have plenty of waves even on the dropping tide, that tidal movement creating some hollow chambers to explore, along with those inevitable Harlyn close-outs too!
You’re going to have to be picky to get the best out of today! 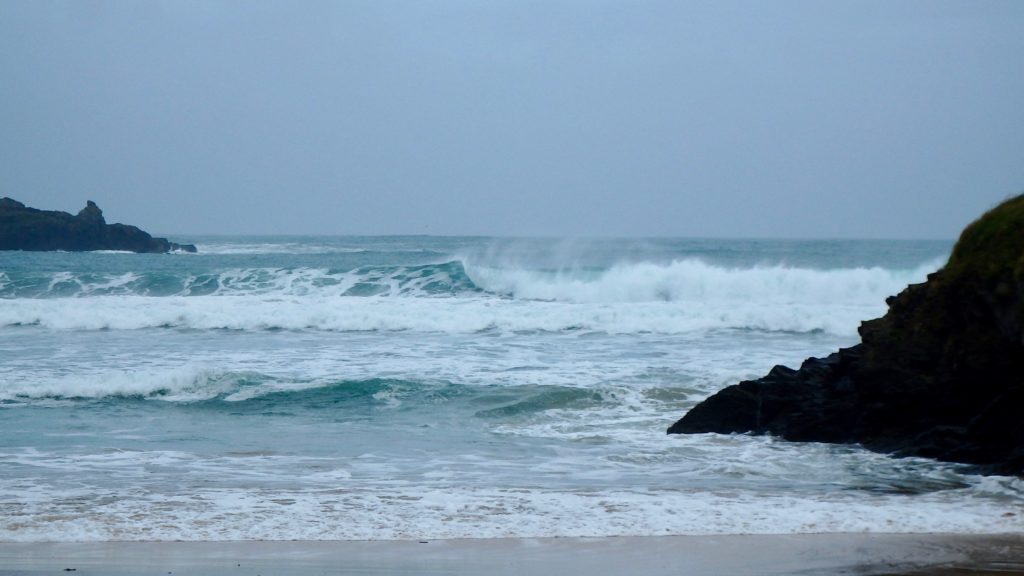 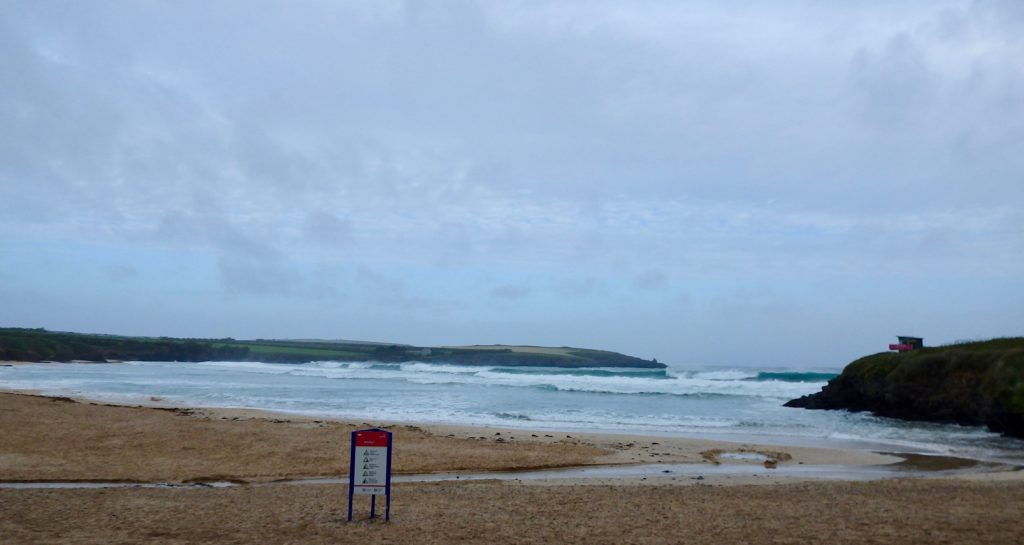 Ah, that wind! That wind is likely to have slipped to the north west by this morning, onshore here, there and everywhere on this coast!
With a five foot swell washing along our coastline it is going to be frustrating to see those choppy and mushy waves crumbling ashore all day long. Our only salvation could be the far coast, if the waves are big enough that is!
Or you could hit for the evening glass-off if you have the patience!

As always the wind is going to play a big part in the surf conditions for this coming week and it looks like an onshore wind kind of start. But the north westerly of Monday morning should have eased to not much more than a breeze by evening and stay that way until midweek at least.
So the week will likely start out with four to five feet of sloppy and bumpy surf hitting our main breaks, the air feeling chillier in that north westerly wind. But the wind should have dropped to no more than a breeze by evening making for maybe some very pleasant conditions in the long lasting twilight.
And sunny days should guide us into midweek with three feet or so of fairly weakish swell washing in, those light breezes varying as we go along but mainly cleaner in the mornings and evening the onshore sea breeze effect kicking in through the afternoons.
And then the end of the week is starting to look quite promising with the possibility of cleaner and more solid swell, if not much bigger along with some pleasant weather too!
But that is a little way away yet.
In the meantime we will be enjoying some mediocre conditions to start the week!
Have a great week, wherever you are and whatever you’re doing!