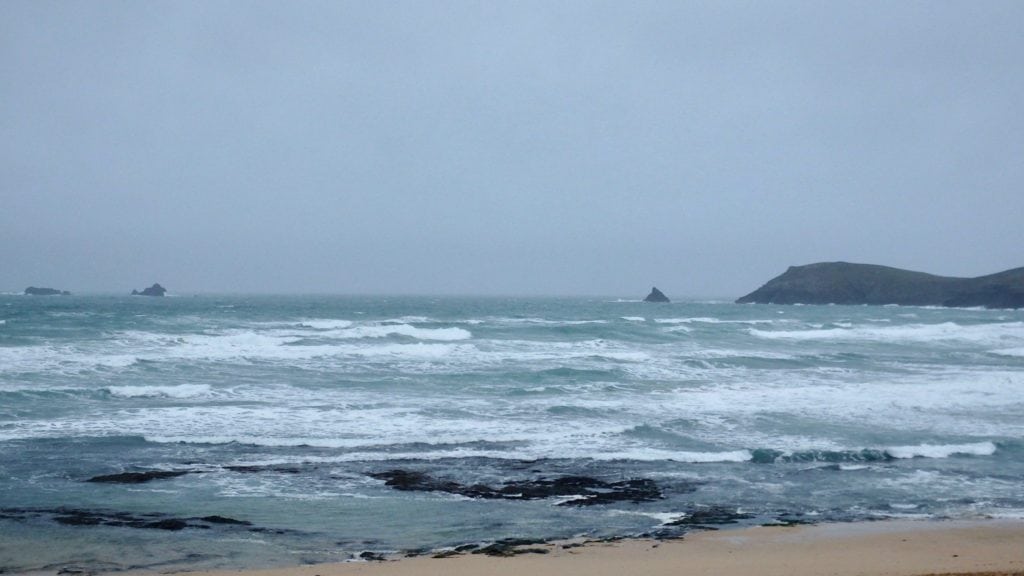 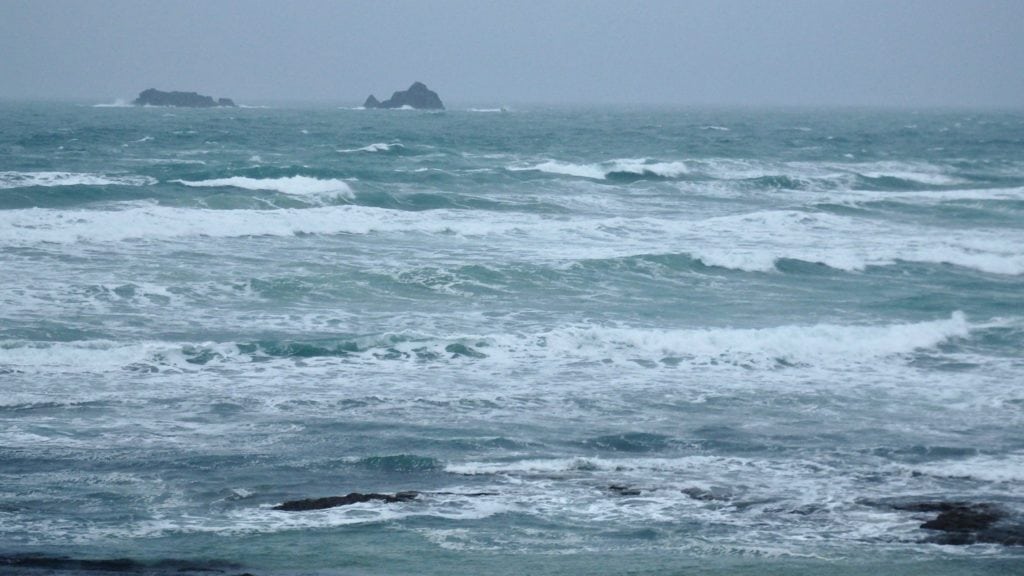 Another damp ’n breezy one is blowing through this morning, a brisk west sou’ westerly sending heavy squalls across the bay, although some lighter and brighter patches are trying to claw their way through that denseness of grey cloud.
So the surf is pretty much trashed here again this morning, four feet or so of windswept chop is scuttling shorewards all mixed and messed and uninteresting.
Harlyn should have a wave though, so let’s trek on over there…… 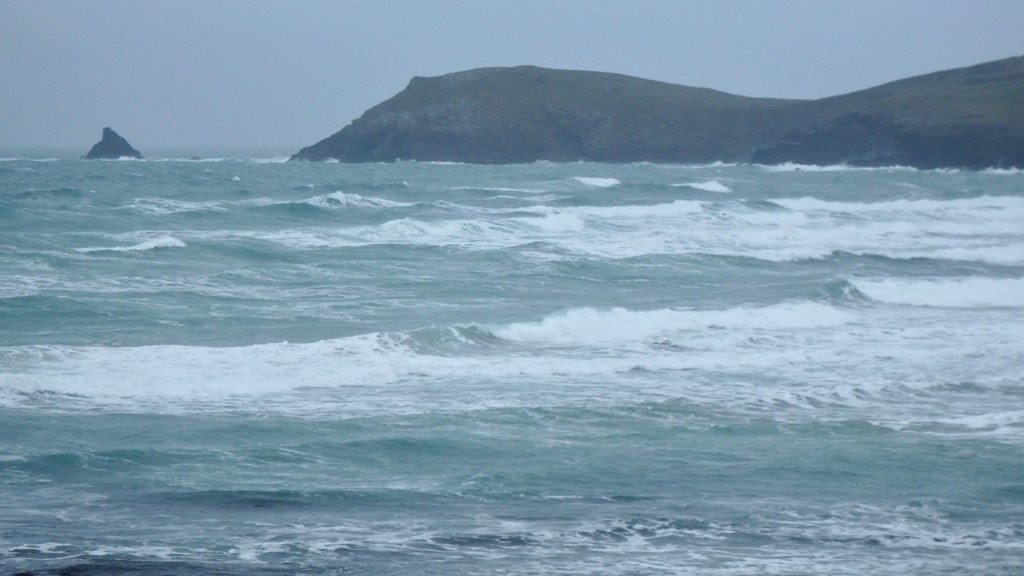 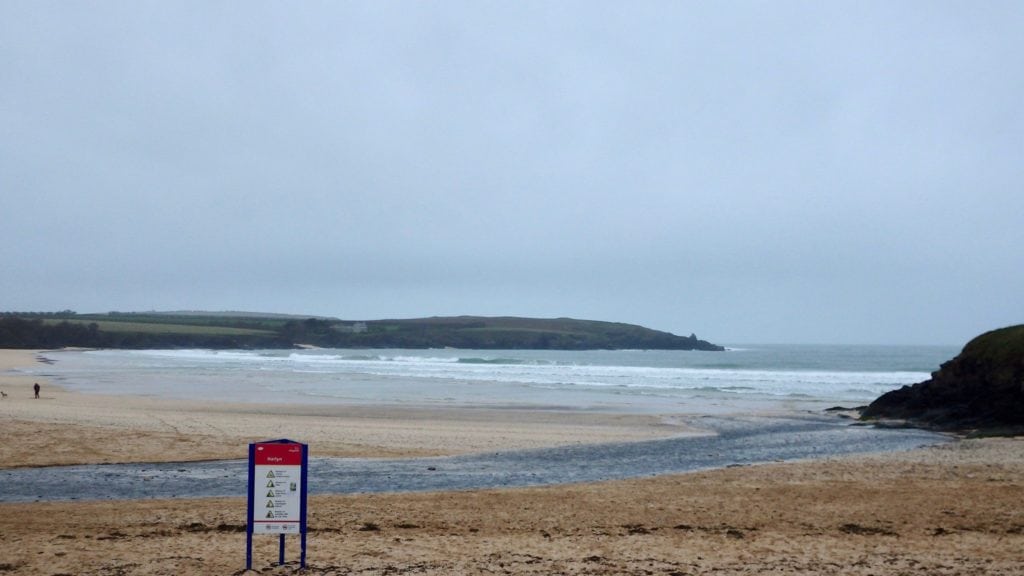 Three feet or so of well intentioned swell is trying to break with some interest off the Rock this morning, a couple of hours off high tide but looking like less than halfway in. The tide is at that stage where some of those waves are backing off before closing out in the shallows while others are sweeping straight onto the Rock itself.
Give it only a short while and it should be a whole lot better, although that wind is a little too westerly to allow it to be not much better than okay!
Still, closing-out Harlyn on a damp and breezy Sunday is kind of right for mid-March and there’s always the last day of the  Beer and Mussels Festival at the Cornish Arms for an after surf relax! 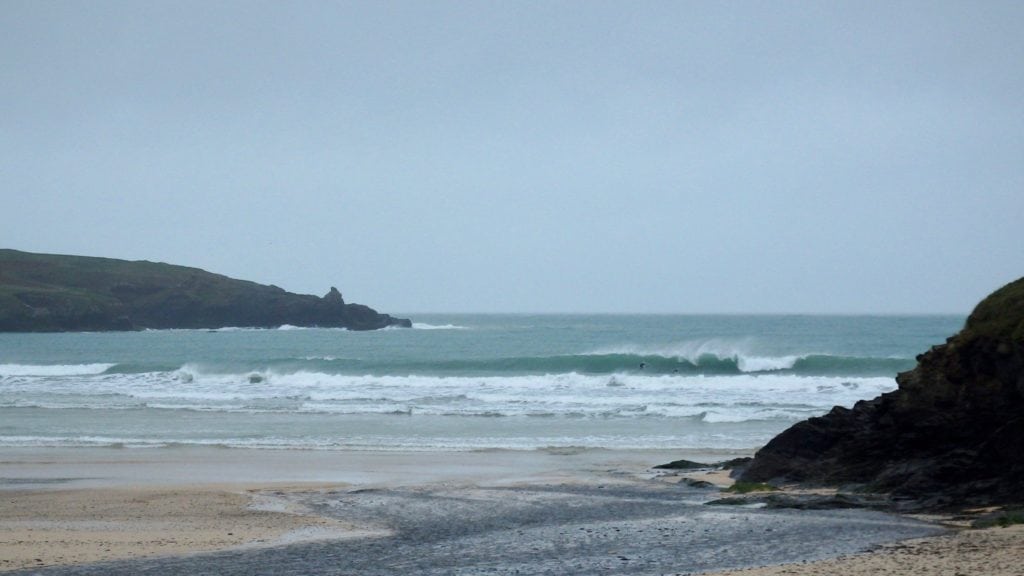 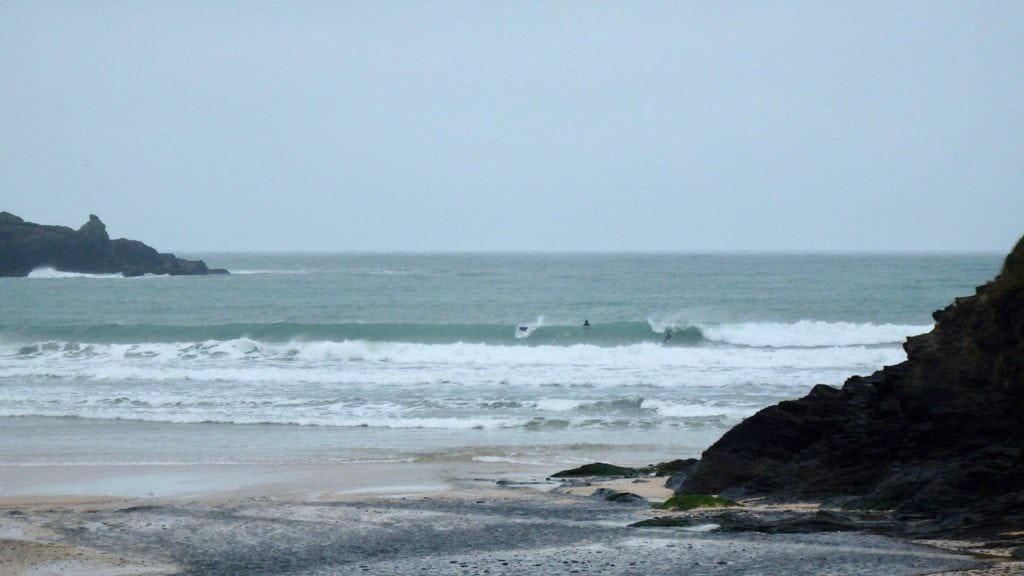 Those blustery onshores should start to ease back through this morning, a light breeze replacing those gusting squalls and maybe even twitching offshore for an hour or two by late afternoon. But it probably won’t be strong enough or last long enough to smooth that overly chopped and wind blasted swell at our main surf breaks before dark.
Our best hope is Harlyn again, which should clean up from lunchtime onwards. It could just end up being really quite good at Harlyn by late afternoon, that north westerly of the morning swinging through south west and ending up direct south or maybe even south easterly for a moment or two!
And it’s just about light enough for long enough to get an after work mission on the go!

Those blasting winds of the weekend are only reluctantly going to leave us alone, still gusting through at the start of the week after giving a us hope of calmer during a brief easing during Monday evening.
But that gusting north westerly will be back for Tuesday morning although it should veer south westerly by the afternoon. So Harlyn should be showing some style again and that should keep us going into midweek.
And then it might just be a while before we need to trek over the headland to Harlyn again as the wind calms and switches direction, while the swell size dies.
Yes, we can expect calmer, brighter and much more fun conditions to kick in for the back half of the week, the swell easing to small and then to tiny but only for a few hours. A new swell should be with us for the weekend!
So we have light offshore breezes and bright sunny weather with decent rolling swells to look forward to at last but maybe not until the second half of the week. And it does look like it’s here to stay a while too!
Have a great week, wherever you are and whatever you’re doing!