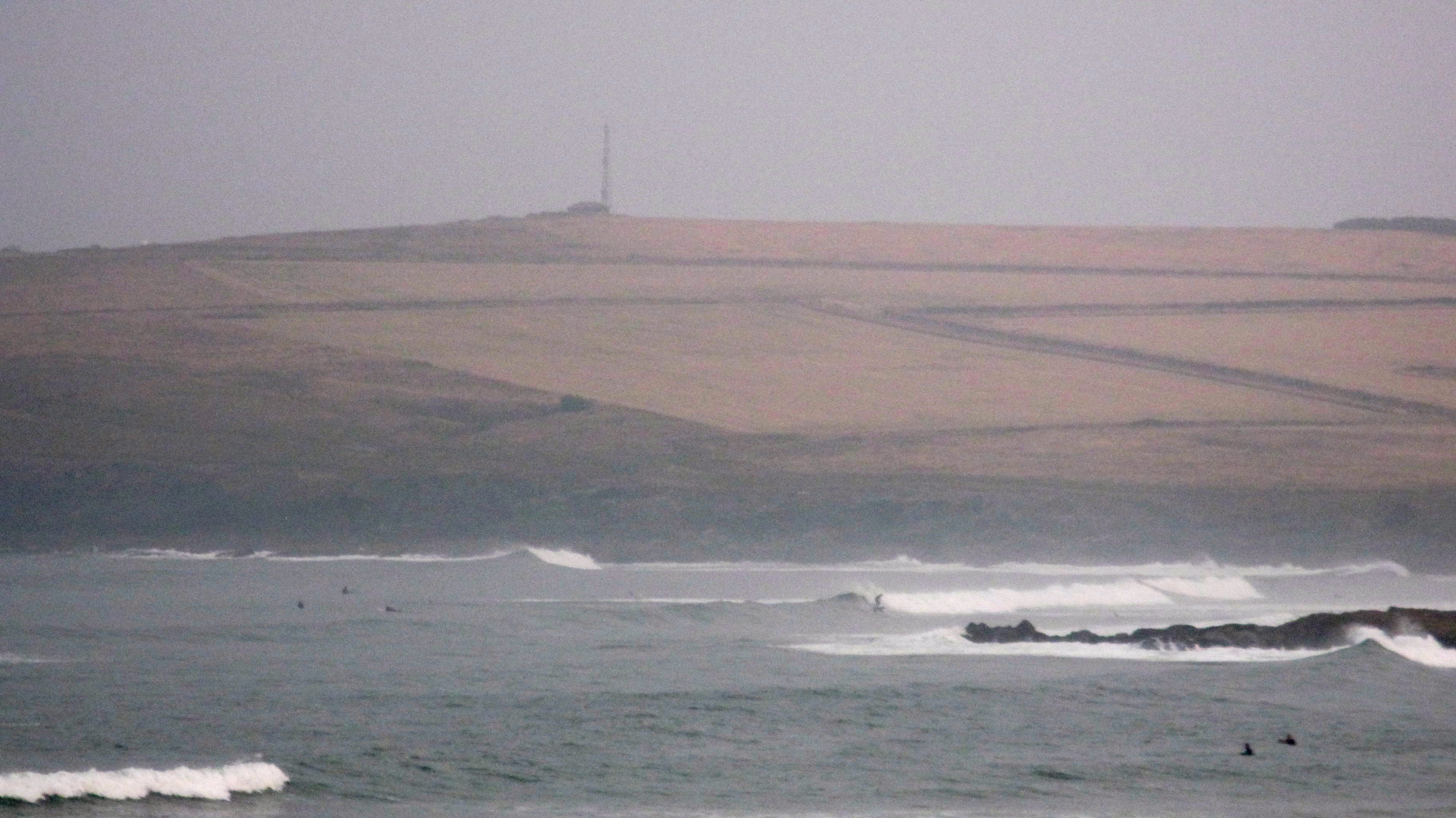 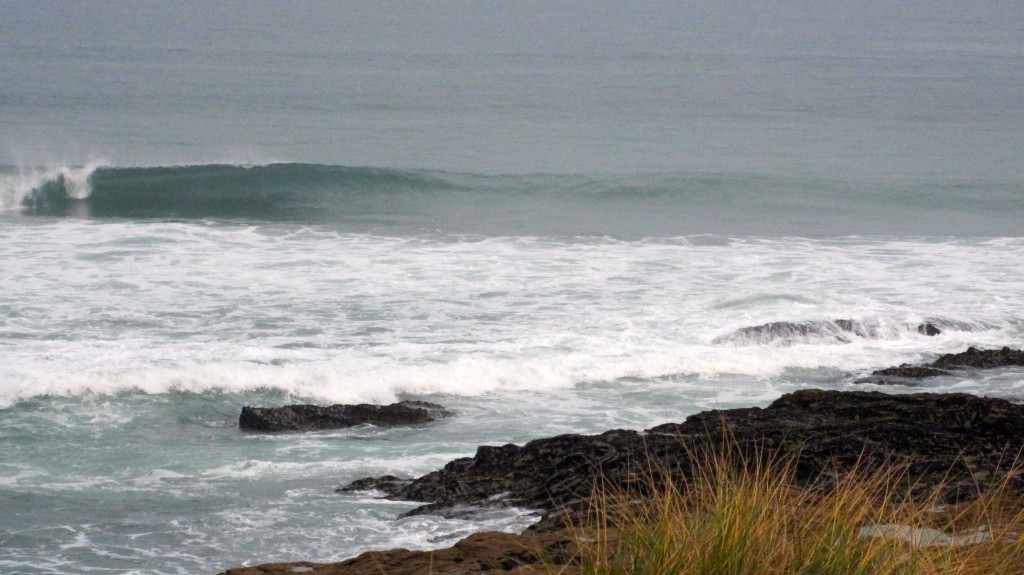 A day late and a tide short but it’s here at last!
After a day’s wait for that phantom swell it has finally arrived this morning, lighting up all the usual surf breaks. A clean and smooth four foot swell pushing through some much bigger waves every now and again. The sets are marching through a long way apart, minutes between the better ones.  And it seems as though the bigger sets are still slowly building.
The down side is that this swell has been flagged up pretty thoroughly and so the car park is rammed already with a dozen out down in the bay and the same again around the Point. Which is strange as there will be a whole bunch of pother breaks breaking better than here this morning!
That could change soon enough though.
Anyway, right now there is a strange mix of swell but all of it smooth, peaking and peeling, some of it shadowing in from those fat outside banks, the odd inside peak turning itself inside out as it winds off that big lump of shallow sand in the middle.
It is very likely to be firing on this afternoon’s tide!
The weather might have sorted itself out by then too, right now it’s all a bit hazy and grey. But the sun is trying to burn through and there’s barely a breeze so it’s all okay!
Have a great day! 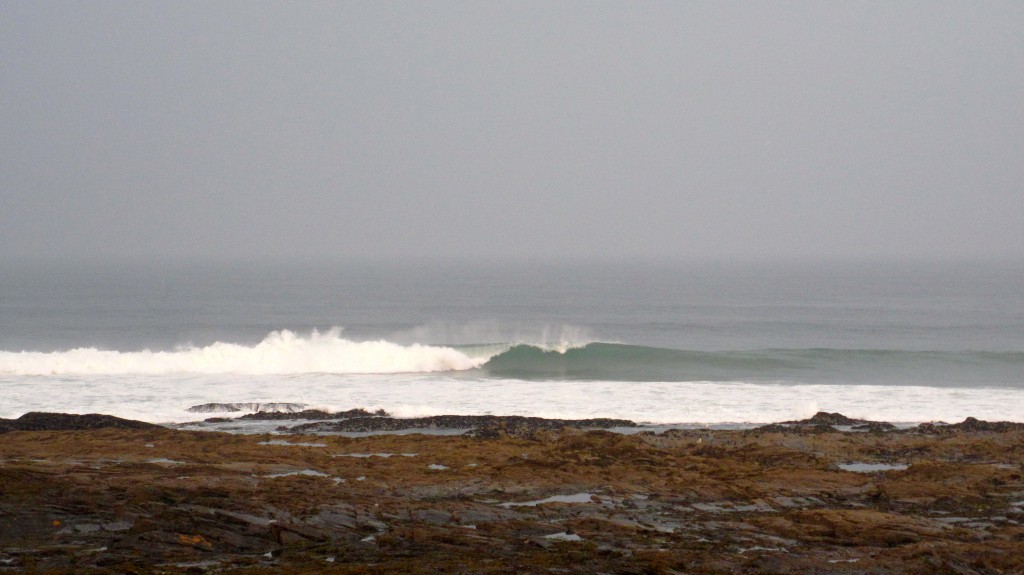 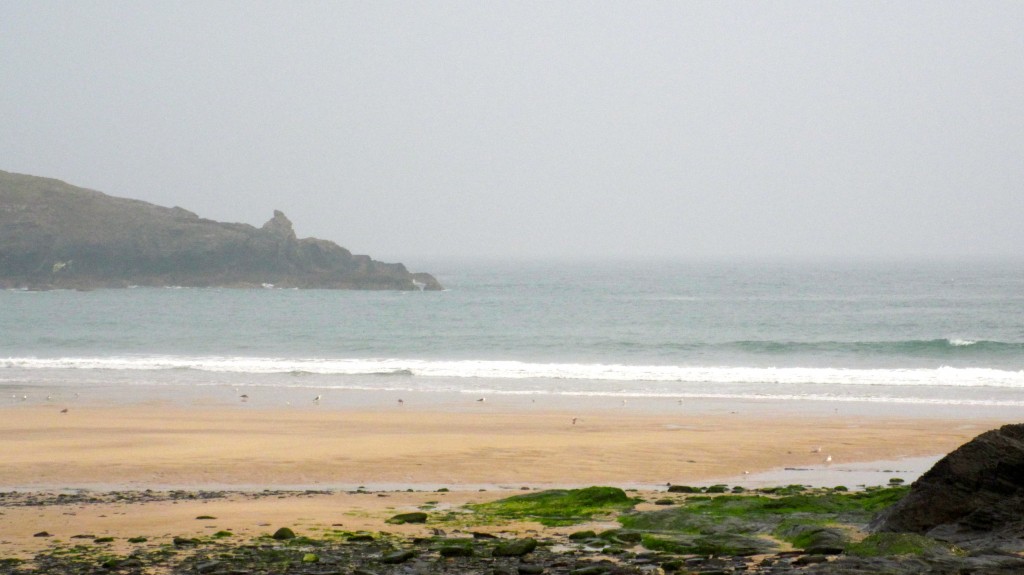 There are some quite mushy little waves pushing in off the Rock as the tide reaches for low this morning. A foot or two of doubled up wave energy is crushing itself onto the sand in the corner. There’s very little wind, well none to notice but the sea surface has that rustled and tussled look to it. And that usually indicates that there is a bit of swell push going on out there!
But none of that swell is managing to get swing in here yet. That could change a bit with this afternoon’s tide, so if Harlyn is your favourite then it could be worth looking back sometime mid afternoon.
But it’s the other side that is going to be on fire today with a solid, clean swell rolling ashore over there. It’s just a matter of time before it sorts itself out enough to be classic!

That swell is likely to have settled itself, a little smaller maybe but hopefully none the worse for that. there are only a couple of breaks that can handle a pushing, strong swell anyway, if it has weakened off then we will have more options to surf!
But we can still expect a solid three feet plus of clean and organised, reeling surf in very pleasant, bright and cheerful weather!
You gotta love September!

That trio of quite interesting low pressure systems which surrounded us this last few days are being replaced by one strengthening system, all isobars and black ink, lurking way out in the west, that high pressure system still clinging on to us and helping to keep those winds above us light and the weather mild.
So we’re going to have waves and good waves as we launch into another week of September swells.
The wind should stay light, maybe a little more onshore than we have been seeing this last couple of weeks but mainly in the afternoons with that sea breeze effect and even then not too strong.
So a half decent three to four feet of surf should kick the week off, that sunshine continuing to brighten our days for a few days at least.
The swell is likely to ease off just for a whole in midweek before surging through again.
Yep, it’s all looking good for a late September swell packed week of surfing fun!
Have a great week, wherever you are and whatever you’re doing!