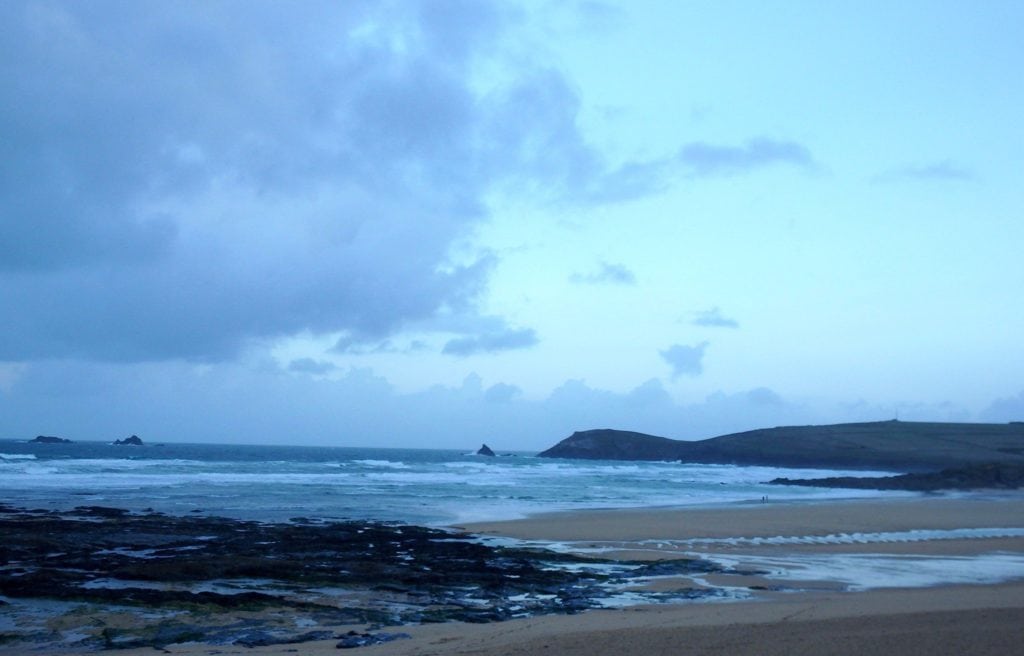 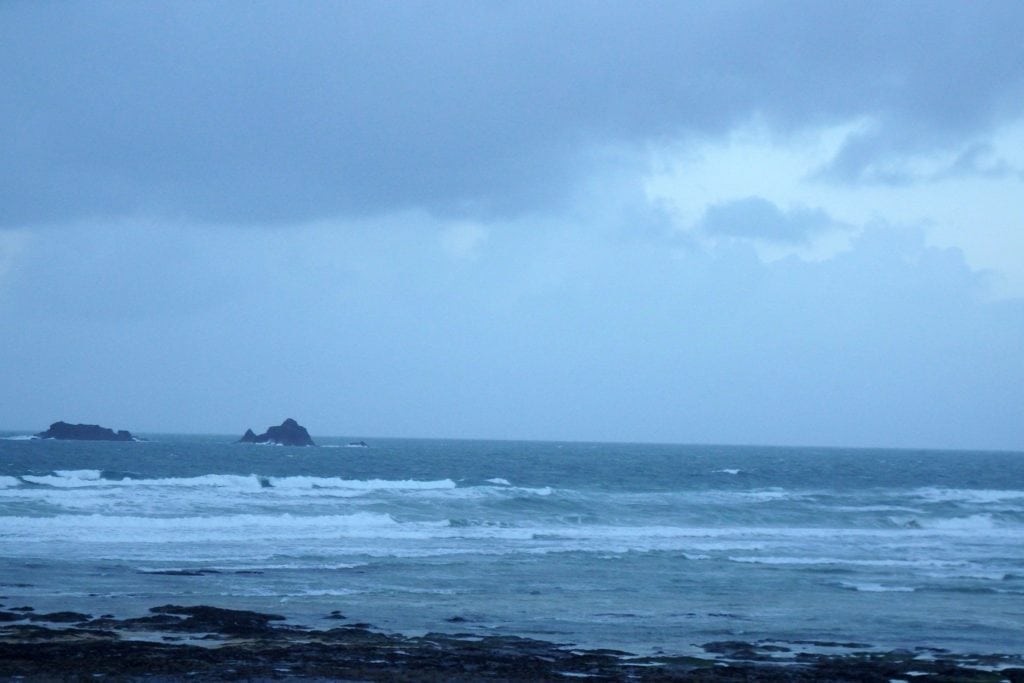 Another wild ’n windy one is blowing through this morning, the wind whooshing in from the grey and choppy Atlantic, a gusting westerly, one step short of a gale. Bundles of cartoon clouds are being ushered along the horizon, that noisy wind seemingly dusting down the clearing, blue sky.
And so the surf is a blown out mess of chopped up waves, 4 to 5 feet of windblown and messed up greyness washing into the bay.
It is an exciting place to be this morning but it’s not a place to rush to surf, not this morning! 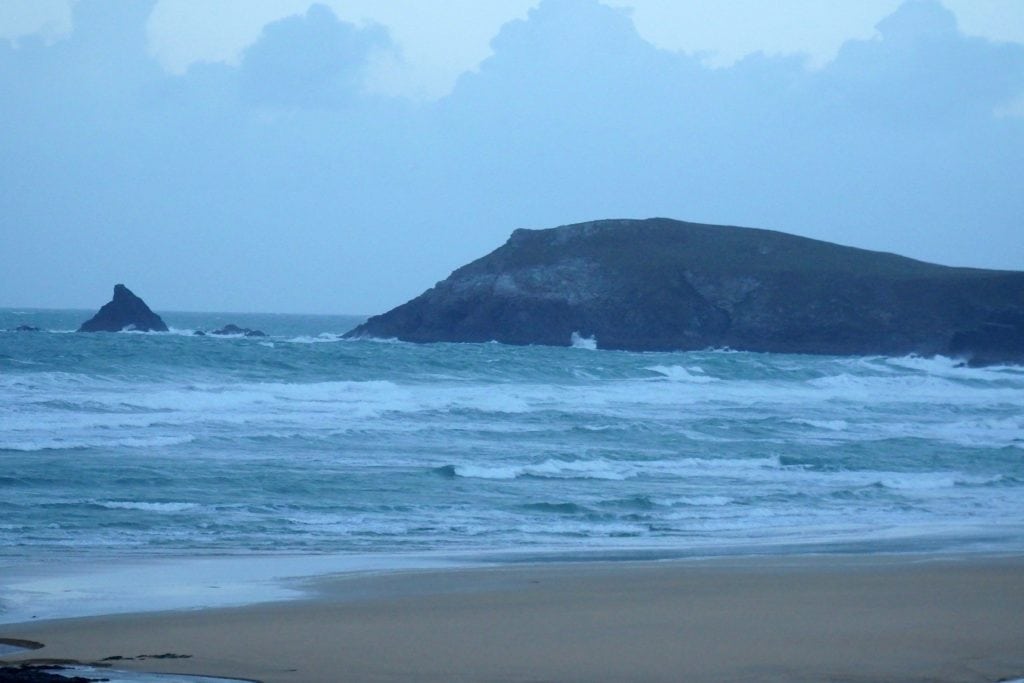 A couple to maybe three feet of thick and lumpy surf is pushing into the bay at pretty much low tide this morning, that howling and screeching westerly wind blowing across the beach.
As the tide stumbles in those waves should become just a little more sheltered, at least allowing some half decent surf to be ridden.
Yes, it could just end up being some fun here later on, once those squalls have cleared and the tide has pushed into the lee of the headland.
It might not be great but should definitely end up being okay! 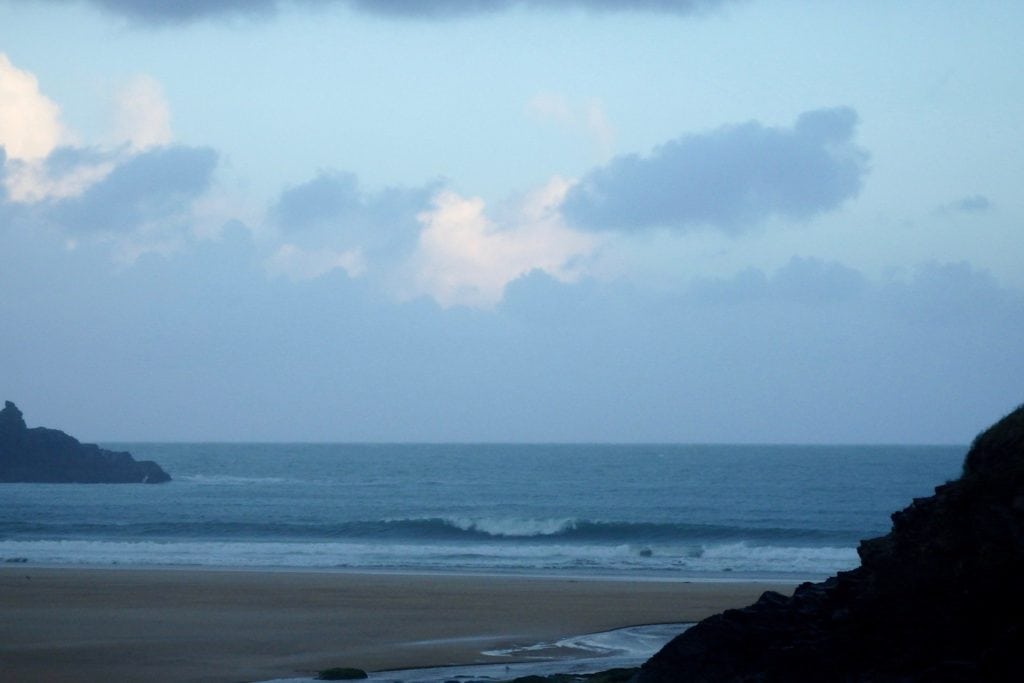 A four foot swell combined with a lightening wind backing more to the south west are the perfect ingredients for a fun filled day at Harlyn Bay.
We can expect three feet or so of offshore blown, snappy and crunchy surf to be on offer around there all day long!

Onshore, south westerly, veering westerly winds are expected to blow us well into this week, not super strong or anything, just a steady onshore, pushing a rhythmic four feet or so of swell our way.
And so Harlyn is going to be the surf break of choice this week locally, the wind being mainly offshore there, while three feet or so of that swell should manage to make it around the headland for most of the time.
Yep, it’s looking like a fairly typical early autumn week of mainly windswept swells swinging into Harlyn to be smoothed out by that same wind that is making a mess of the rest of the surf breaks. And with those lovely, warm sea temperatures then it is looking good for a week of fun surf.
Have a great week, wherever you are and whatever you’re doing!