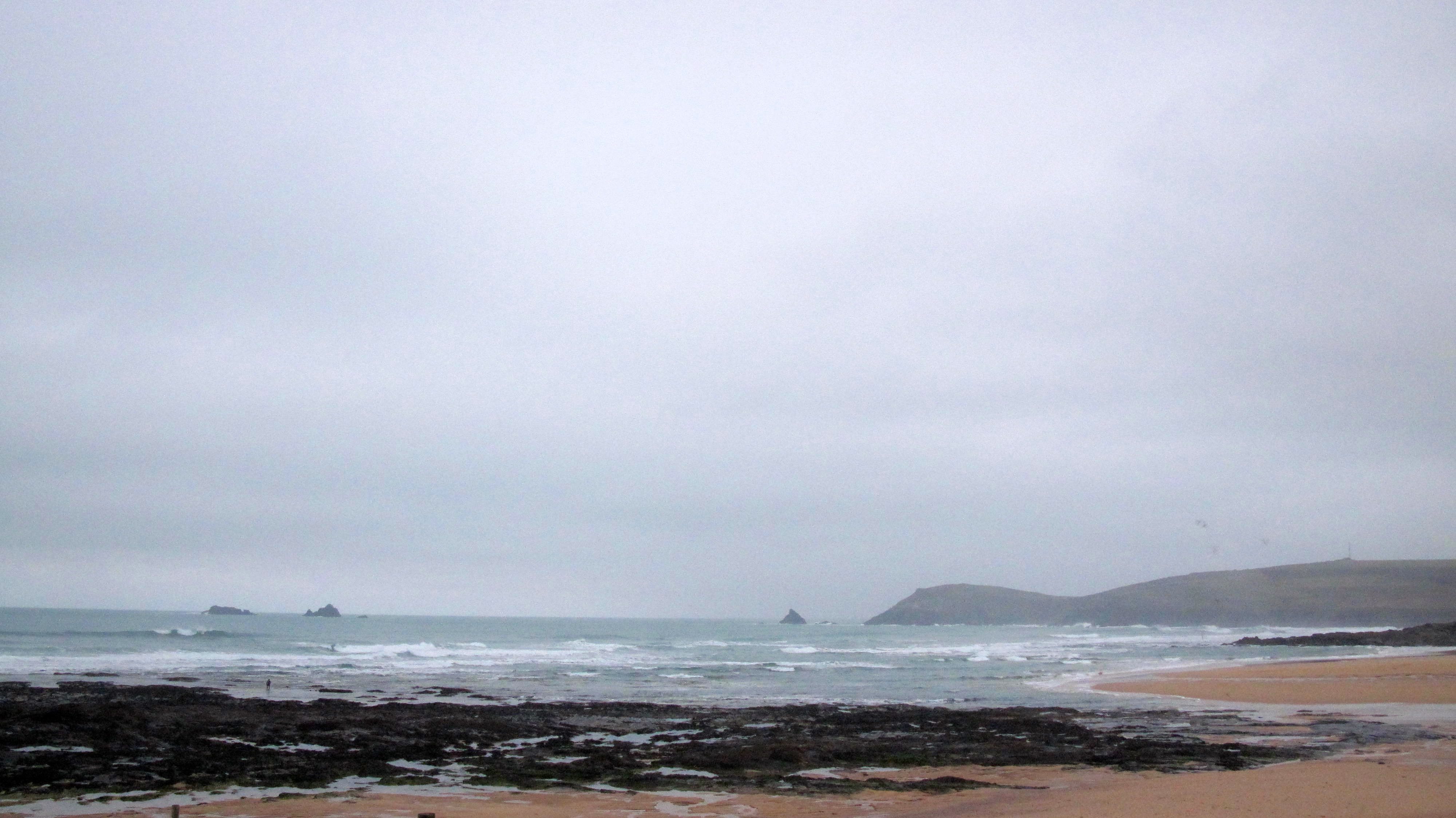 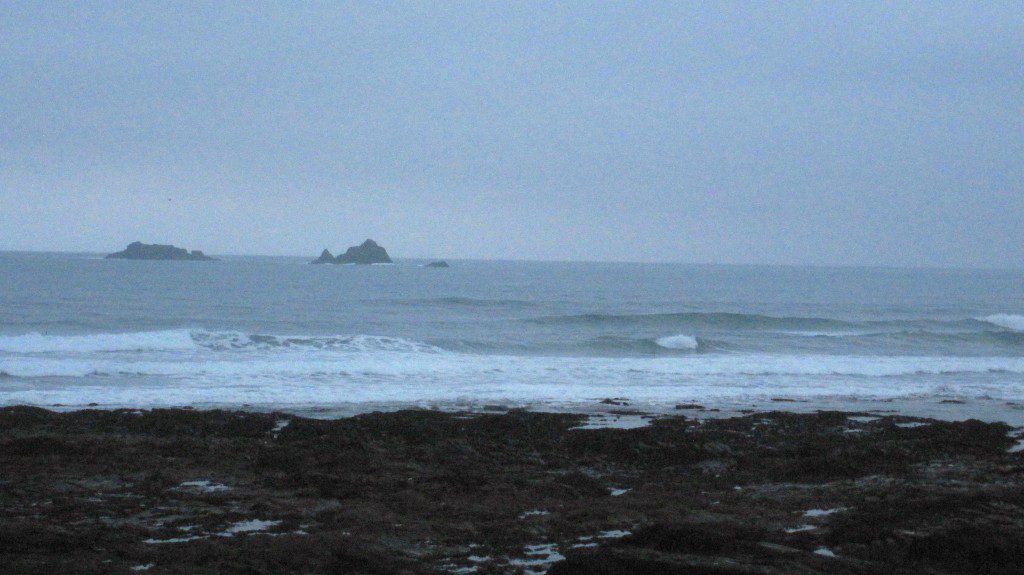 It’s all little greyer that expected this morning, a little damper too.
And the surf is a little smaller than hoped for as well.
But it’s still pumping!
There’s four to five feet of those grey and shiny kind of waves washing in, the set waves looking better with more power to give it shape I guess.
The wind is nonexistent so far, fairly light offshores (south easterly) forecast for the rest of the day. And it seems to need it. There’s a bit of a warp on those waves, maybe it’s just an early morning mix, the tide two thirds out and no wind.
Saying that it’s looking pretty good, you just know that right now there might be better elsewhere!
But give it an hour or three and it could just be as good as it gets right here!
I don’t know what has happened to that promised winter sunshine though! 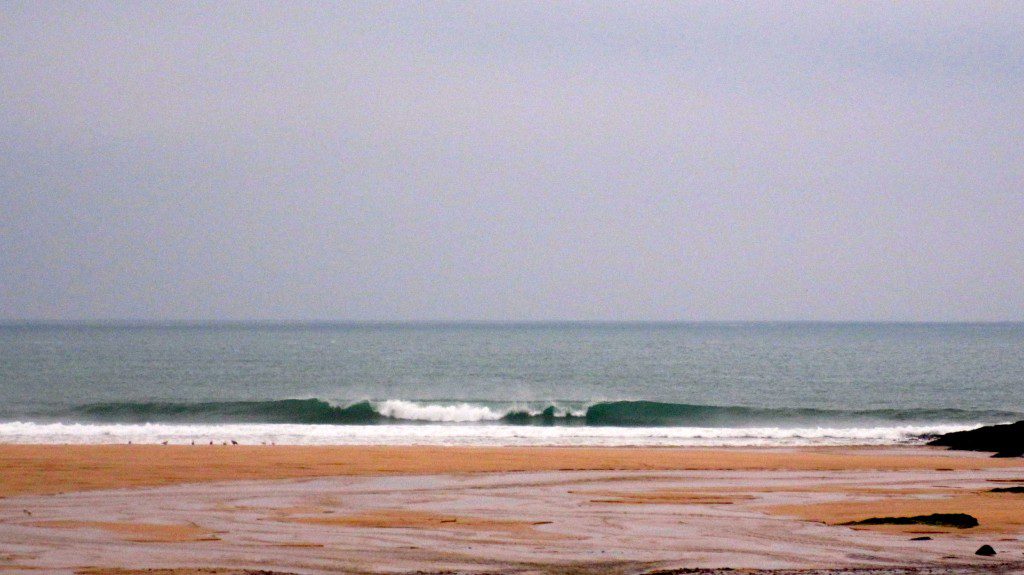 It’s sharper over here this morning, smaller obviously but crisper and snappier.
There’s a good couple to three feet of super clean waves rifling off the Rock as the tide drops out. If the swell stays then it should be bigger and better this afternoon with the incoming tide but we will have to wait and see on that one, the swell might also weaken a little.
But the other side is rolling through at a steady four to five feet plus and I guess that might improve as the day goes on too!
So you do have a choice today and here is small but worth a look if you enjoy Harlyn surf. 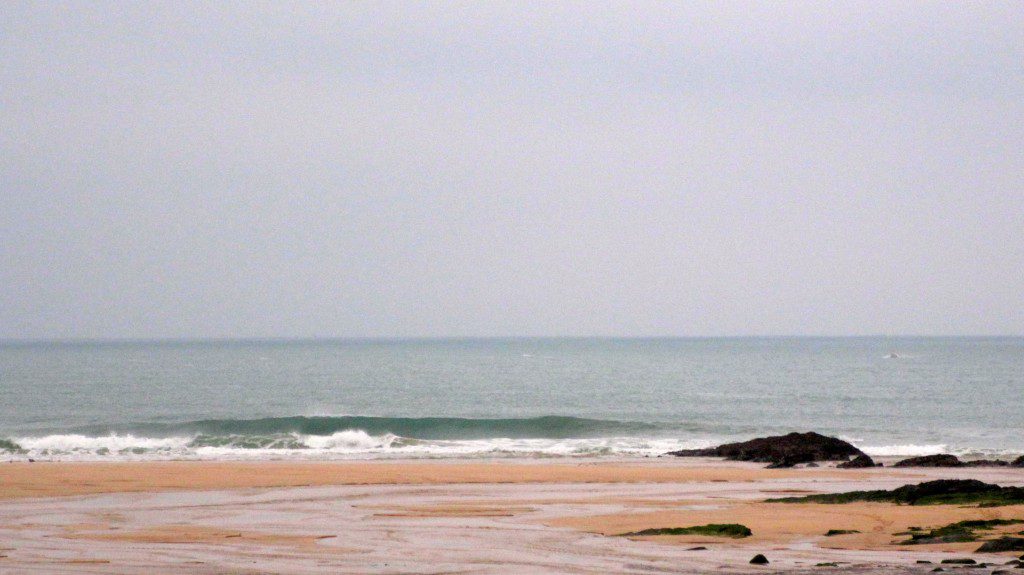 There’s a southerly wind forecast for today with a smaller swell expected but still in the three foot range.
Constantine and the more south west facing breaks are likely to be a bit lumpy but there are those breaks that are just a little less south orientated (Fistral) and they could be really, really good. Sharper and snappier with some peelingly good surf!
It might just be a pleasant day for a bit of a surfari!

As seemingly everyone slips back to work, school, college or surf travels, this week at home is likely to be offering up a mixed bag of surf conditions.
There should be plenty of waves around, getting big into midweek, probably in the six to eight feet swell range but with varied winds to affect it all too.
Staring out as a direct southerly through Monday that wind is likely to alternate between north westerly and south westerly day to day, making for choppy and sloppy conditions everywhere for Tuesday, offshore at Harlyn for Wednesday and so on.
It is looking like a good week to alternate trips to the south coast with crunchy days at Harlyn or similar!
The weather is going to be mixed up as well with plenty of everything, a little sunshine appearing between some inevitable squally showers and more unseasonably mild temperatures.
Have a great week, wherever you are and whatever you’re doing!