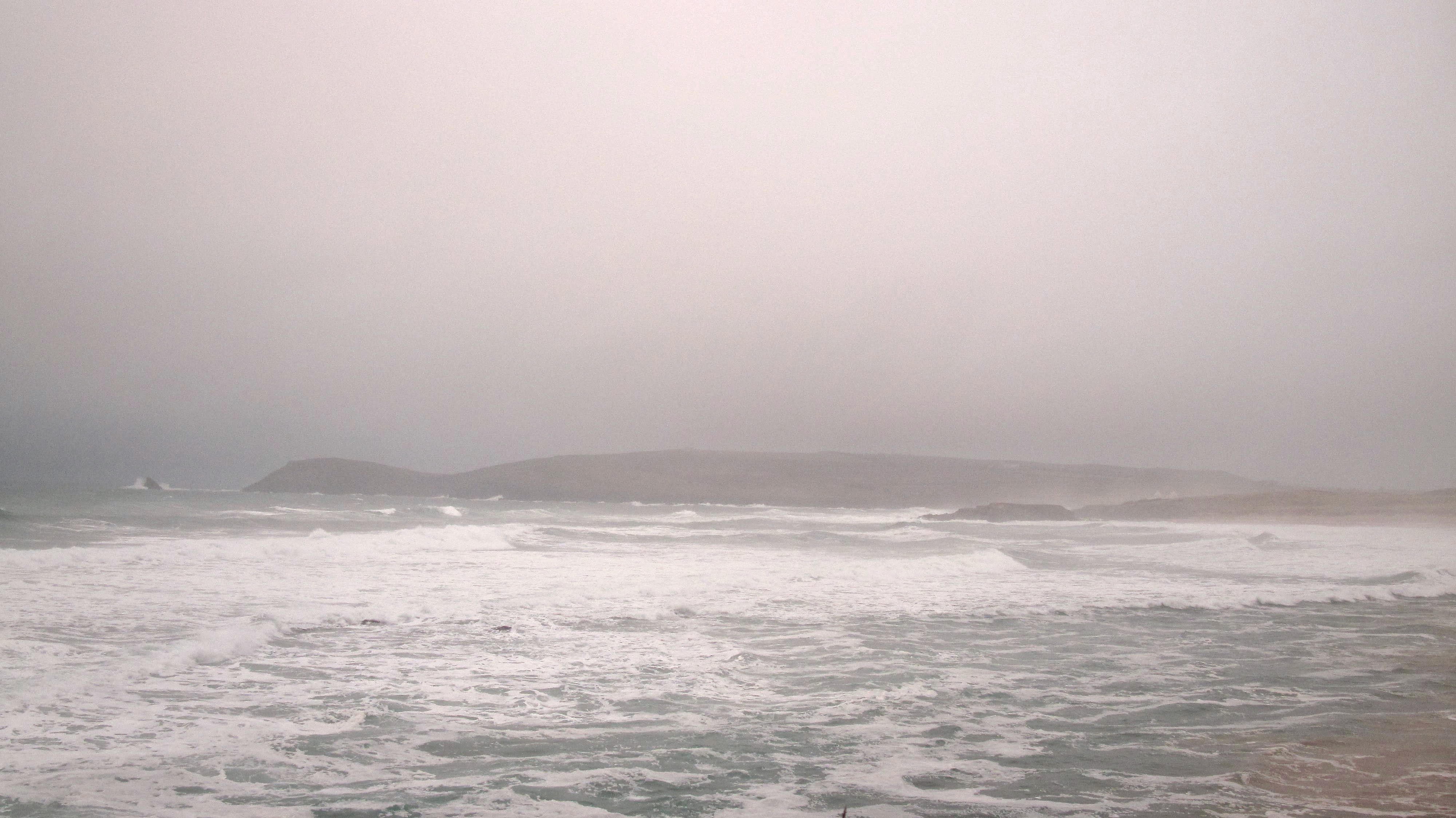 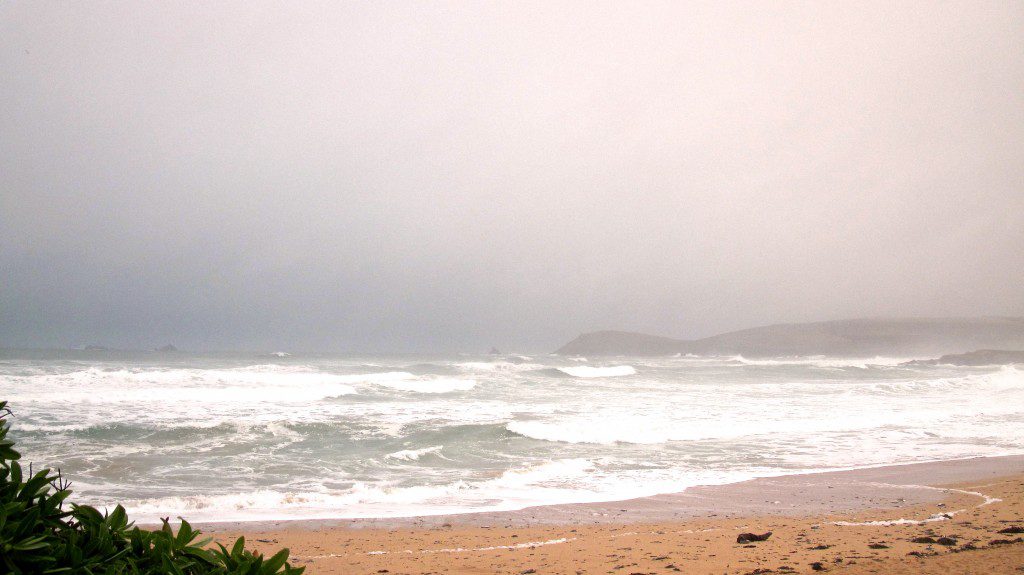 A mizzly, drizzly, damp and ugly morning is there to greet us this morning, a clinging canopy of wetness stretching across the bay.
The surf is in the five foot region, probably way bigger if you were out there, that thick and swirling swell often being deceptive when it’s like this. The wind is steady, a steady south westerly helping to roll that swell into the bay but toppling and pushing those waves, causing them to break all over the place.
It is strangely cosy but there’s not enough going on with the surf to be tempting.
So let’s trot on over to Harlyn for a look-see again!

If you are around this way on the weekend, it might be worth dropping in on us at the shop.
We are having lots of new stock delivered and so we are having a bit of a clearance sale! All those winter wetsuits that we didn’t manage to sell this winter need to be cleared!  They include Xcel and O’Neill winter and summer suits at up to £50 or more OFF, many of the summer suits at HALF PRICE and we still have loads of sizes at the moment!
Be quick though, word seems to be out already!

And we are stoked to announce the arrival of Patagonia clothing and stuff into our little store!
Patagonia’s mission statement is:  Build the best product, cause no unnecessary harm, use business to inspire and implement solutions to the environmental crisis.
And that sounds like just the type of business that should sit nicely within our little surf store, eh! 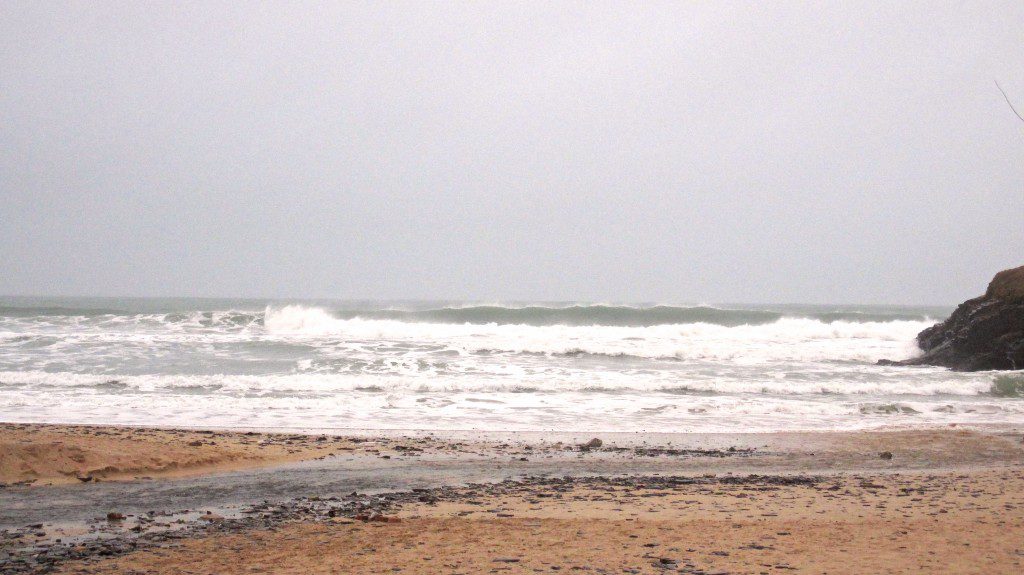 The tide is a little too high just yet but it’s not a super high tide or anything and so should soon drop back enough.
But otherwise it is all quite pleasant, there’s three feet or more of surf swinging wide into the bay, the steady south westerly wind blowing offshore into those turquoise/grey waves. There’s nobody in yet but Toby (Ray) is slipping quietly into his wetsuit and there’s one or two other cars starting to roll into the car park.
Get on it quick though if you are thinking of a Sunday session at the ‘lyn, that wind is likely to swing onshore here by lunchtime, although hopefully it should have lightened to not much more than a breeze by then too! 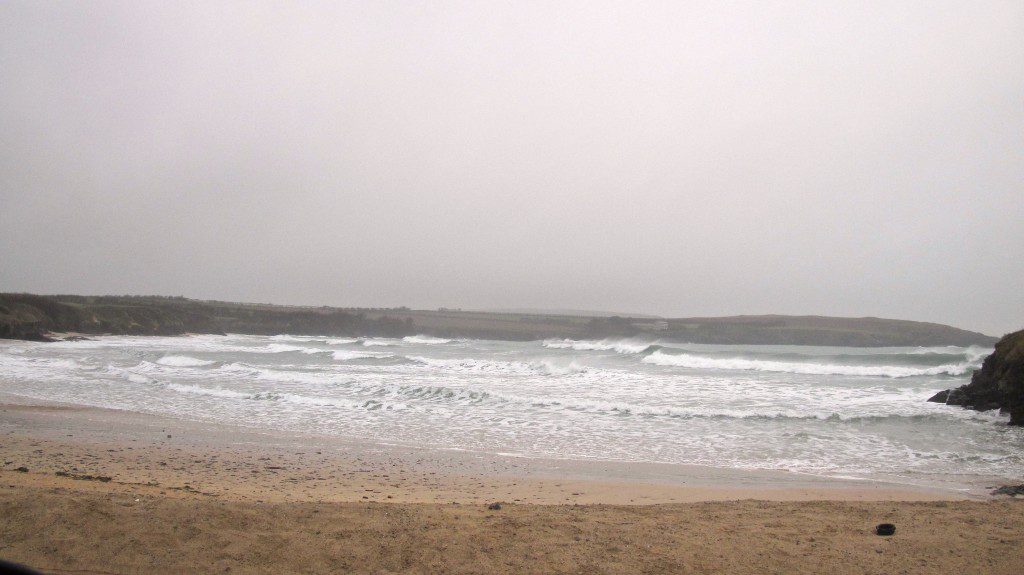 Although the swell is likely to have eased there should still be enough to swing all the way around and in to Harlyn.
The wind is likely to have shifted back to the south west, maybe slipping more westerly through the afternoon but generally being one of those typical dull, drizzly and overcast, two to three foot Harlyn days!

The week looks like it is going to start out all dull and dreary with a big enough swell but mixed up mainly onshore winds, Harlyn looking like being our only option on Monday.
But don’t despair, Tuesday could be awesome!
Offshore, south easterly, winds are being forecast to lightly blow against a solid five foot groundswell. The double-digit wave period indicating that it should be a powerful swell.
Yes, Tuesday could be good!
Wednesday is likely to end up being more ‘mixed’ with a disorganised swell being messed up more by the shifting winds. Small Harlyn could end up being the best of a mixed bag of surf.
Those mixed conditions are likely to stay with us through to the end of the week, the wind, as always, dictating where the best conditions might be and swirling around most points of the compass!
The weekend is looking super promising but that is getting way ahead of ourselves!
So, a week of mixed conditions lies in wait, Tuesday possibly ending up being one of the stand out days of this Winter!
Have a great week, wherever you are and whatever you’re doing!