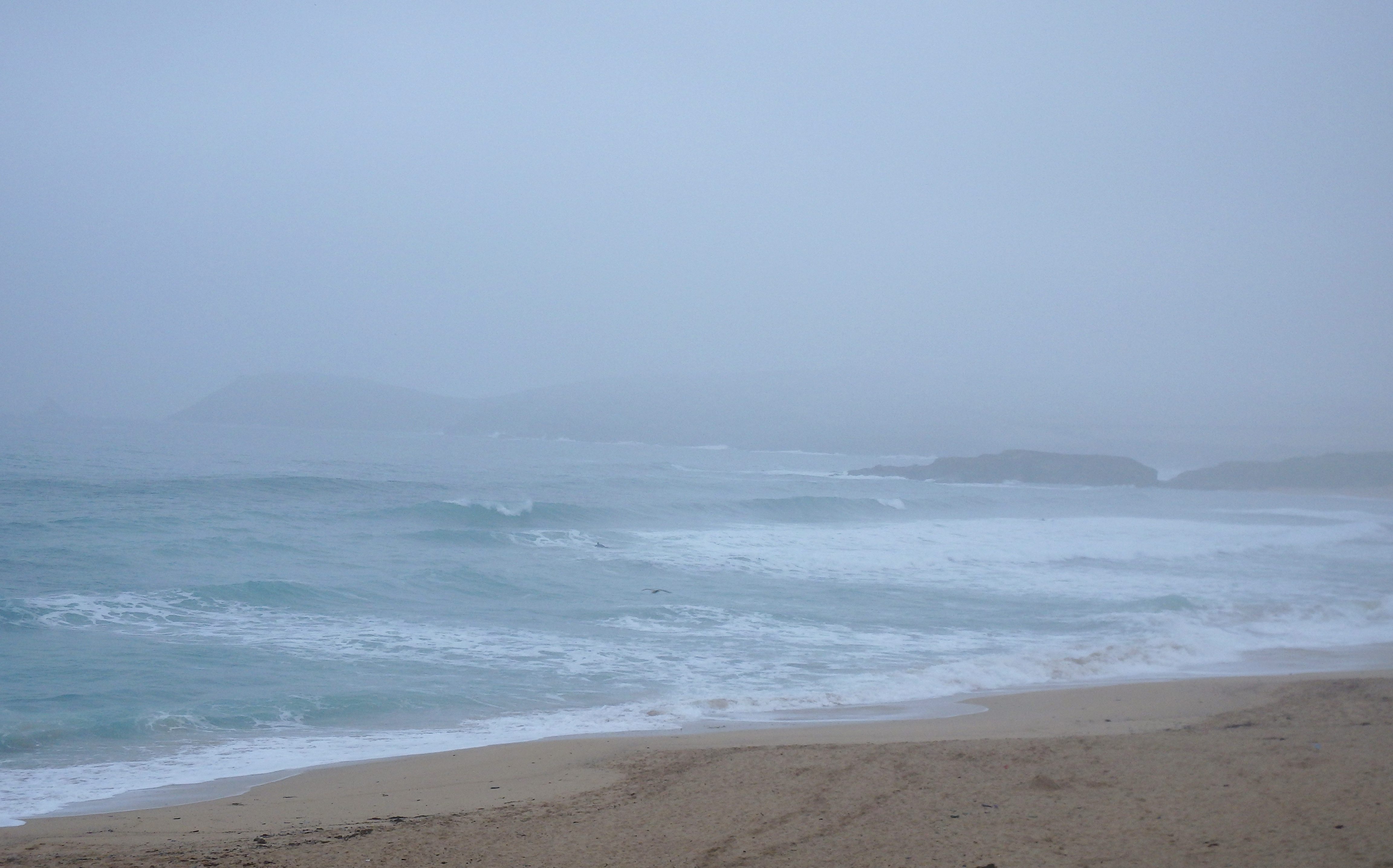 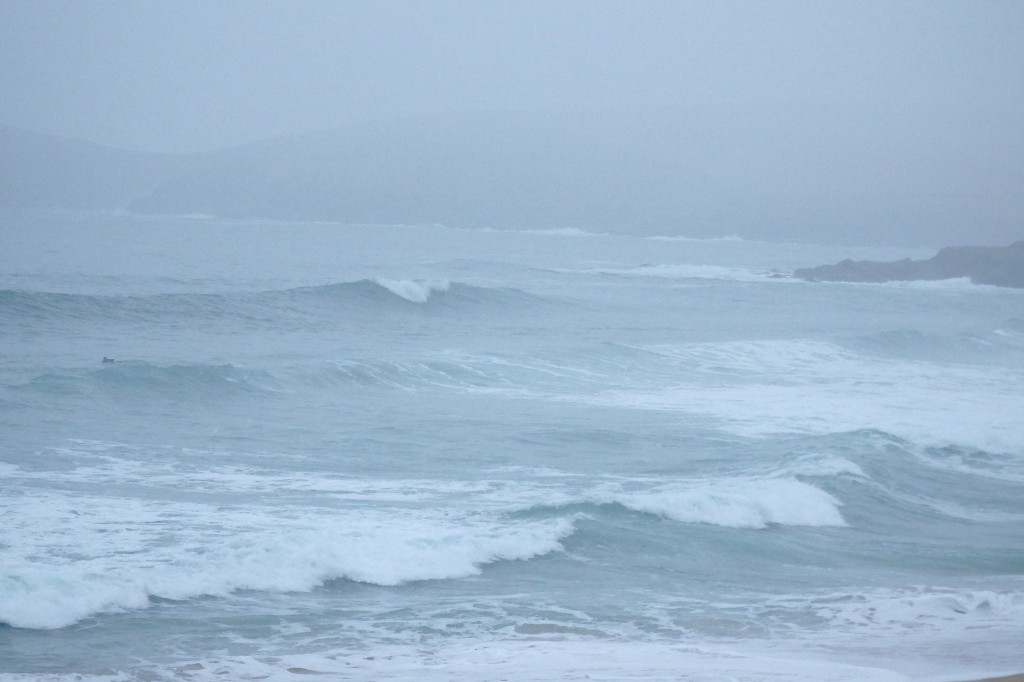 Ah, it’s a drizzly, mizzly, dull and dreary old morning this morning, oddly cosy in it’s mild dankness though.
Visibility is low as a marine layer of wet air loiters at high tide, a seamless merging of sky and sea, highlighted by the slashing whiteness of broken waves.
Yes, there is surf this morning and it is pretty good!
Three to four feet of lumpy waves are bowling through the mist and mizzle, those wave faces smooth in the stillness of a fog bound morning.
It’s probably going to be mid-morning before the air clears but that should happen and then we will see some brighter and cheerier sunshine to light up those still smooth and mainly clean waves. 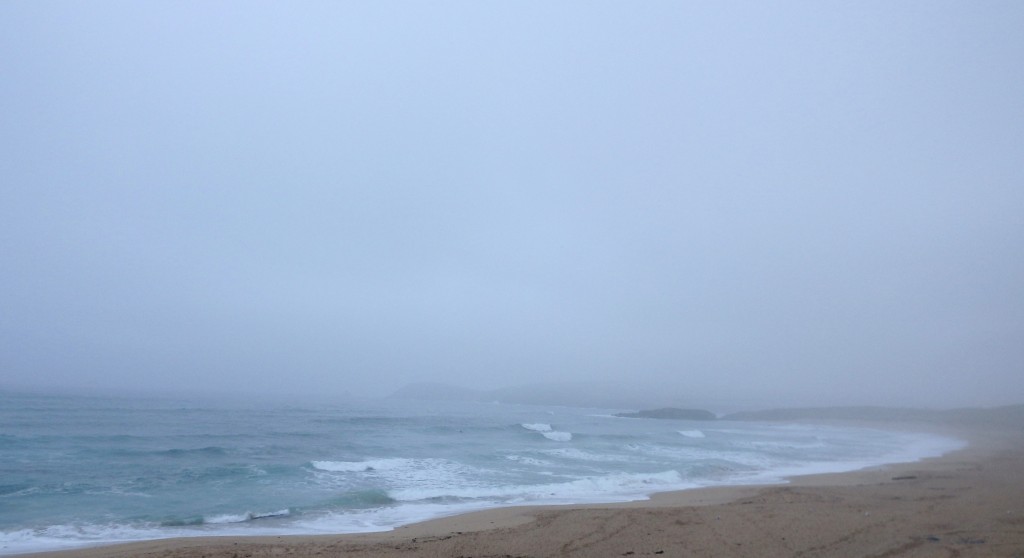 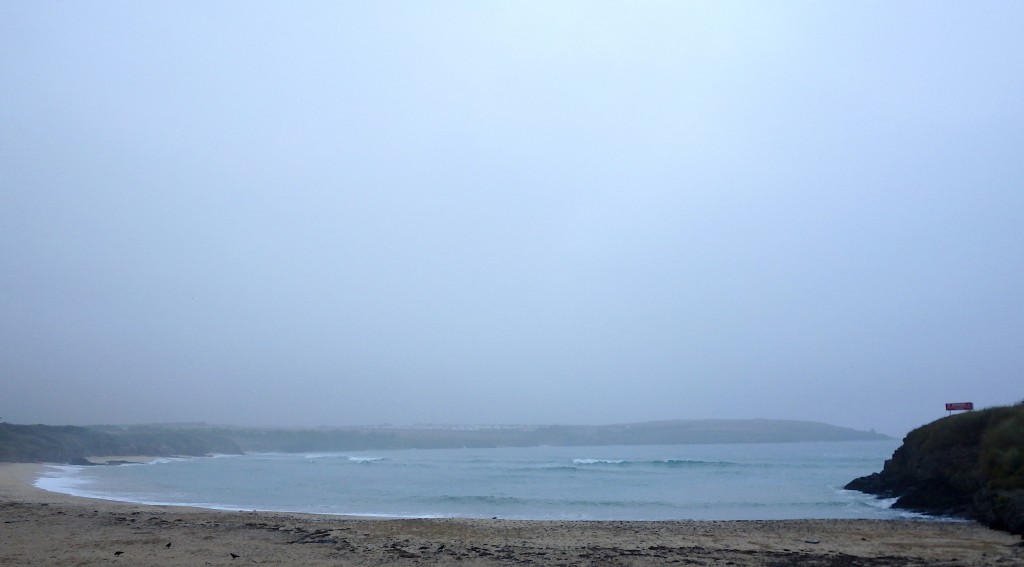 There are some small wave shadows sliding across the high tide smoothness in the murk and mist of a mizzle sodden summer’s morning.
The tide is too high right now but give it an hour and there should be some sharper and snappier little one to maybe two foot waves crashing in. Give it another couple of hours and we should see some brighter skies too!
The other side of the headland has all the surf again today but if Harlyn is your fave wave then you should manage to enjoy some tiddlers later.
That’s going to change before this weekend! 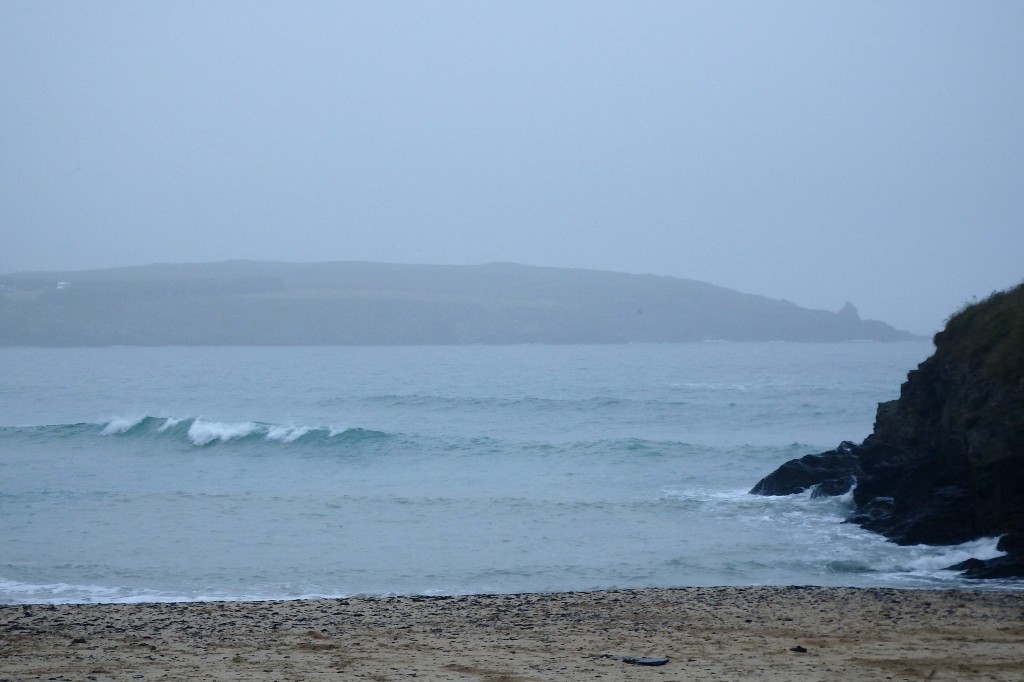 Watch the wind blow today as a deepening low pressure system bears down on us.
Strengthening south westerly winds are likely to blow some thick and heavy swells our way today, the surf building all day long. Those three to four foot swell lines will soon be replaced by four to six feet of windblown and unpredictable, chopped and slopped storm surf.
By the evening those waves are likely to be getting into the ‘big’ range, big but completely trashed by the wind.
Harlyn is likely to start to shine ahead of the evening high tide with some bigger waves getting in there too.
That is going to be the place to surf by this afternoon!

The pleasantness of earlier on in the week is going to be quickly replaced by a window rattling blow-through as this weekend approaches!
Strong south westerly winds are likely to be winding themselves up through Friday, blasting through more from the west through Saturday before settling into more of a direct westerly direction by Sunday.
So big swells should start showing themselves through Friday, bump-starting Harlyn with a building surge of wave energy.
And Harlyn is likely to be the surf destination of choice locally, the wind blowing more offshore here and hollowing out what are promising to be some big and thick waves.
That couple of feet or so of pleasantly shaped and hollowing waves of Friday are likely to become sand dredging, stand up barrels by Saturday, steadily becoming more lumpy through Sunday.
Take it easy out there, it’s likely to be busy and the standards are likely to be mixed too!
Have a great weekend, wherever you are and whatever you’re doing!