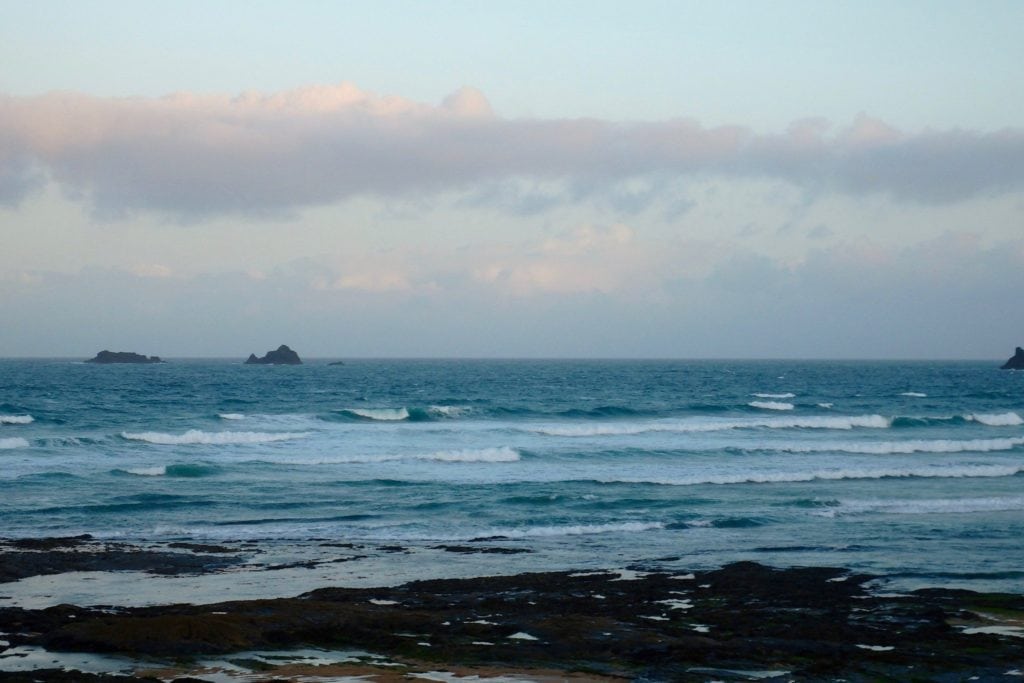 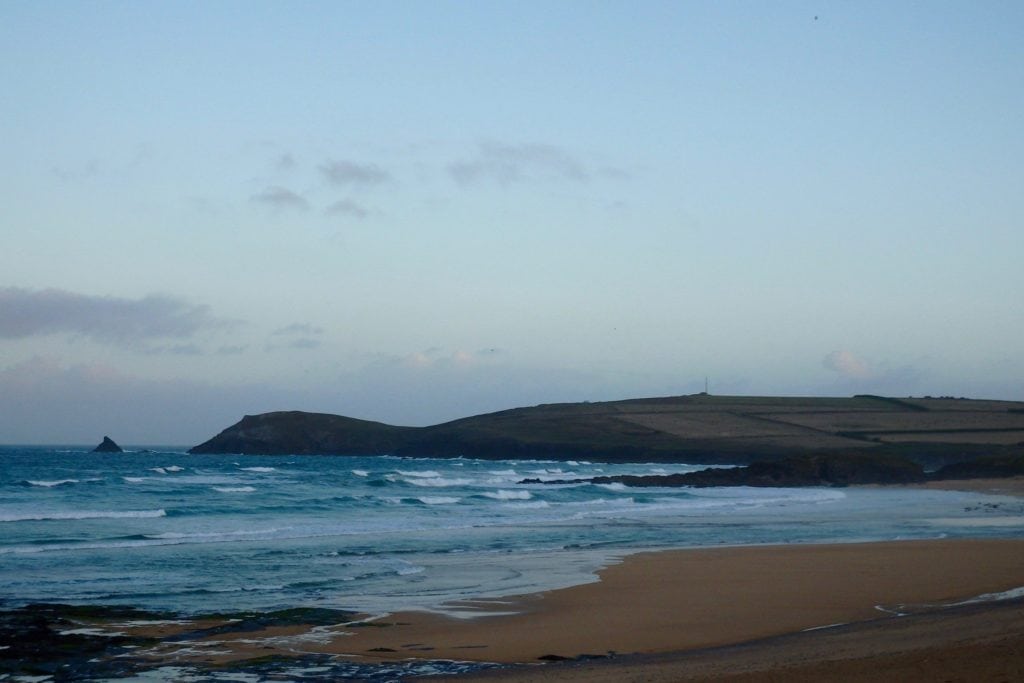 It’s a bright but blowy one this morning, a gusting sou’ wester blustering noisily into the bay, pushing those fairly fluffy dollops of cloud around the sky while slopping the only so-so surf.
Three to probably four feet of broken and slopped out surf is washing around the bay, that wind tugging and pushing and making a bit of a mess of it all.
There’s a little stab of autumn in the wind too, it’s not cold but there’s a sharper feel to it all this morning.
But the water is warm and there are a lot of windswept waves washing around so there should be some surf worth riding somewhere!
Let’s have a look at Harlyn…… 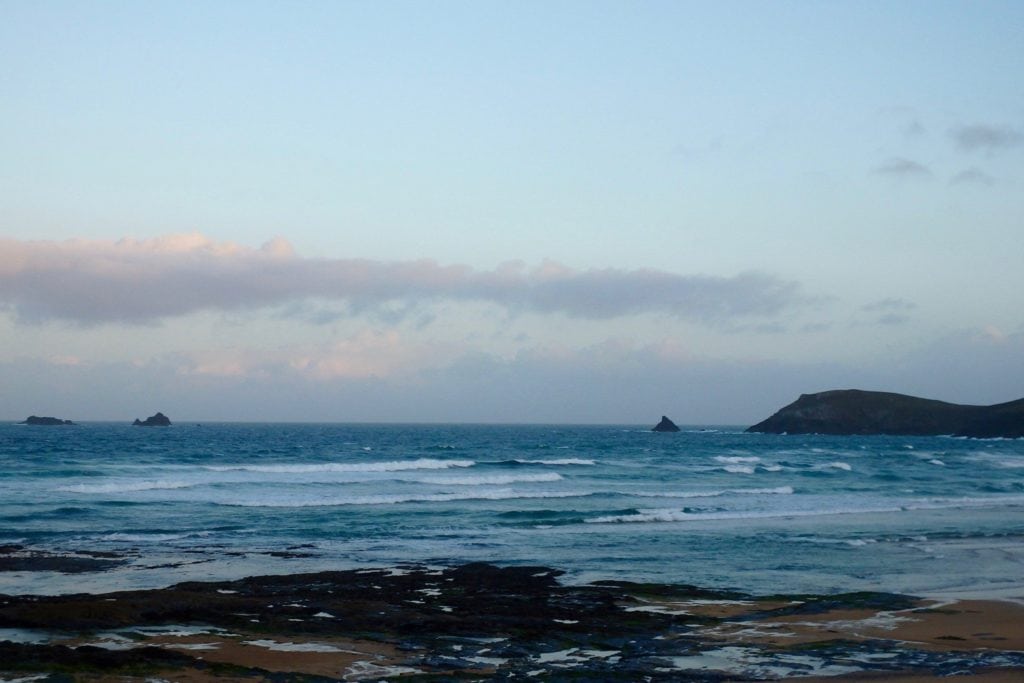 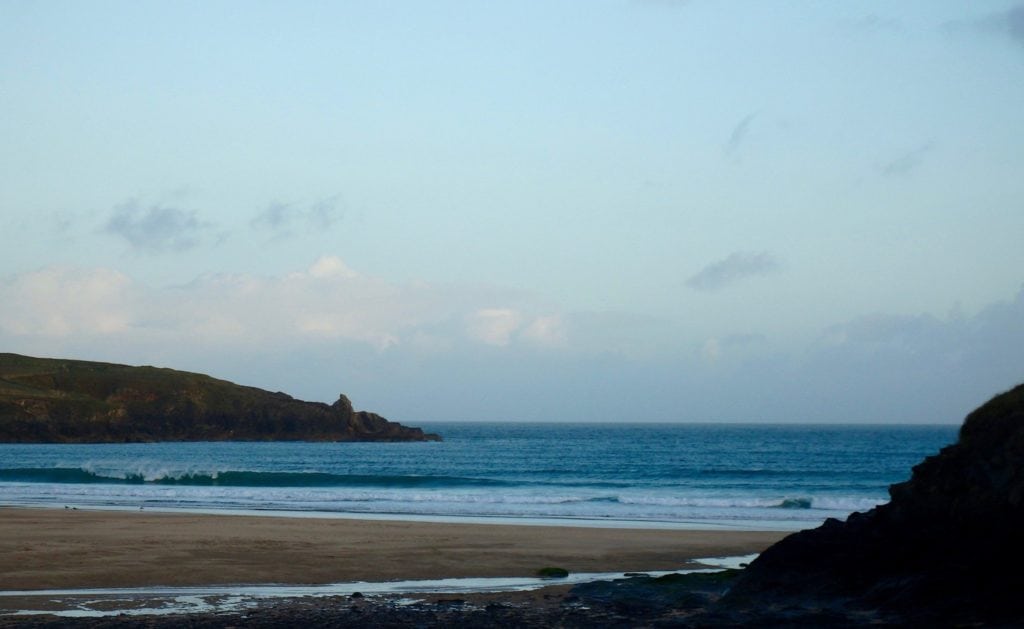 A couple of feet of darker looking surf is rolling up the beach every now and again, the wind gouging at those wave faces, those set waves looking as though they are getting bigger quite quickly.
The wind is set south westerly for the day and the swell should be building all the way through and so you have to think that this could be the favourite spot for today!
It’s a couple of feet right now but that should have doubled in size by high tide later on this morning! 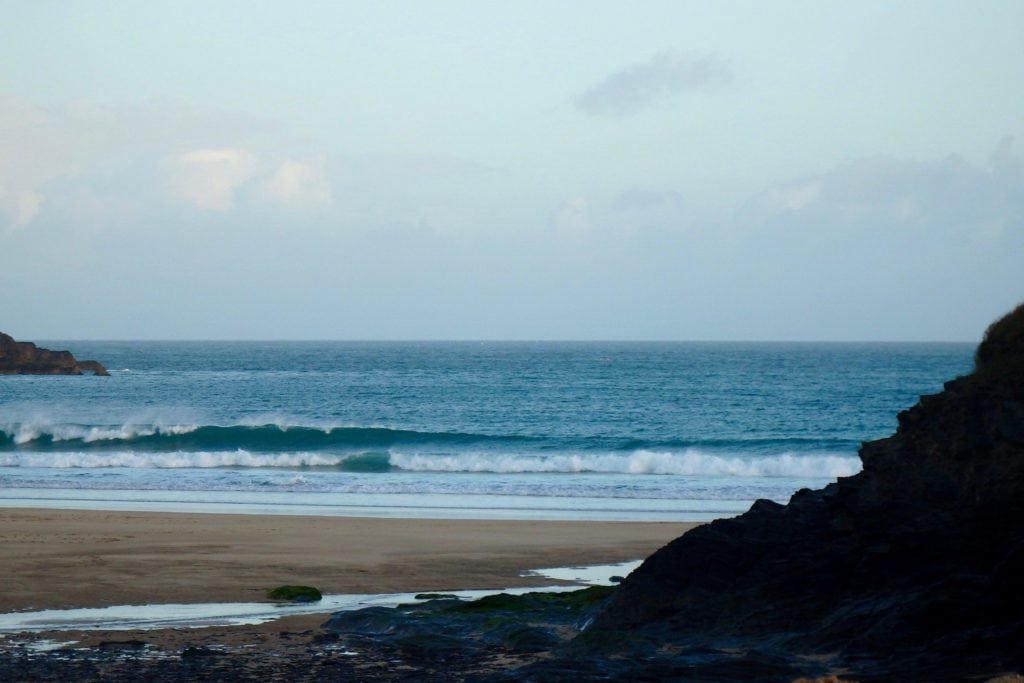 That brisk south westerly wind is set to continue to blow, while four feet or so of windswept but fairly chunky swell continues to roll our way.
The weather might be feeling a little chillier but it should be relatively fine and bright enough for most of the time.
Yep, it looks as though we are in for a typical three foot and offshore day at Harlyn!

Plenty of swell should continue to roll our way well into the weekend but the wind looks as though it could continue to plague us as well.
Saturday is likely to start off slowly, a sullen and damp morning maybe but with only light breezes allowing the four feet or so of swell to produce some okay and cleanish surf. The wind is likely to strengthen only a little by lunchtime but blowing onshore from the west and so making a bit of a mess of the surf at most of the breaks. Harlyn will be our best bet but it might be a little lumpy around there by the afternoon too.
The wind is likely to strengthen into Sunday but blowing more from the south, at least allowing Harlyn to be clean and maybe (but definitely just ‘maybe’!) allowing one or two other main breaks to shine.
The swell is likely to start to show signs of easing back through Sunday as well, still staying in the three feet size range but not quite as thick and lumpy as it has been.
By Monday the swell will have rebuilt with a south westerly wind behind it and then we could just see some much cleaner and super, offshore blown surf as we go into midweek.
So, a bit of a more autumnal weekend awaits but with lots of surf and some half decent weather here and there too!
Have a great weekend, wherever you are and whatever you’re doing!