It’s a grey start to this morning, a misty, hazy blending of sky, sea and land enveloping us with that cosy silence, interrupted only by the gentle birdsong and whoosh of small waves.
Sorry that I didn’t get round to dropping a surf check yesterday, our internet connection was down at home and the shop all morning. I’m still not sure why but hey ho, you didn’t miss much!
Anyway there’s a foot or two of glassy surf rolling into the bay this morning, those much bigger ones a long way apart but definitely there. And there’s a steady gap between the waves, this little swell seems to have some rhythm to it, so I guess that it could be fun gliding across it on a longboard.
The forecasts are showing a light breeze at most for the rest of the day, that breeze drifting in from the north, nor’ west, while some brighter weather should eventually be allowed through but maybe not until later.
Yep, a little longboard heaven awaits! 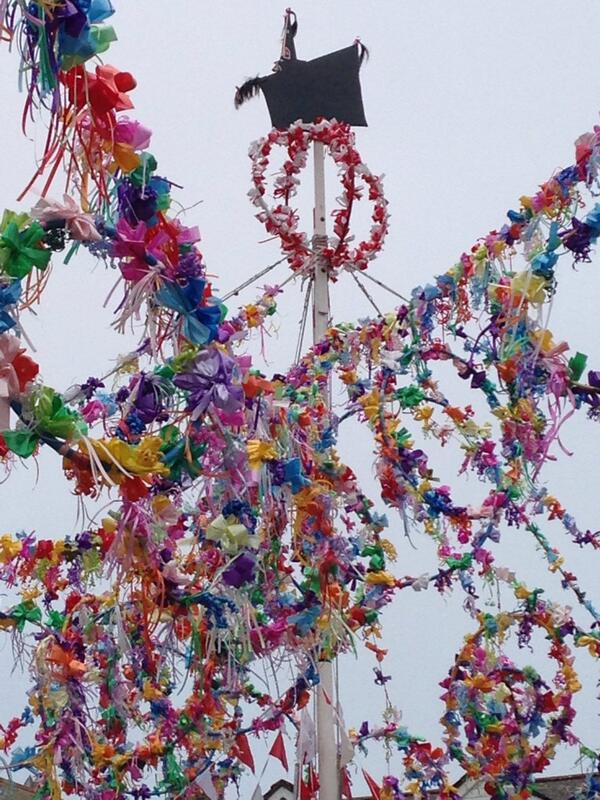 May Day is fast approaching,the boom of the drums, the drone of the accordions, the hypnotic tones of choral chant; ‘Summer is a-coming….’ pic: ‘oss ‘oss.

No, it really is as felt as flat can be around here at high tide this morning.
It is peaceful and calm and the sea is glassy and still. A great place for a paddle in the gloom, or just a peaceful wander but you won’t be doing much surfing, not here , not today!

And back the wind goes to the south west, only lightly before getting a little stronger through the afternoon. So that will help the already building swell, the three foot surf of early morning gradually strengthening through the day.
I’m not sure whether it will get big enough to wake Harlyn up but there could just be a foot or two of super clean stuff swinging in there by the afternoon.
It should be a bright one too!

Low pressure systems are still in control, creating some damp and breezy weather but allowing some bright and cheerful stuff through too as well as keeping at least some surf rolling our way throughout.
It’s going to be midweek before the wind backs to the south west creating a slow and faltering change in the weather, the surf staying pretty much in the three feet and mainly bumpy range, maybe getting big enough to spin a wave or two into Harlyn by Wednesday afternoon.
So, we can expect plenty of surf as we go into the week but maybe not the cleanest at our main surf breaks. But those southwest facing beaches are the most obvious places to check first with maybe Harlyn showing some flair by midweek.
The end of the week and weekend are just starting to look interesting with expected off shores to groom the anticipated small but rideable little swells.
Have a great week, wherever you are and whatever you’re doing!