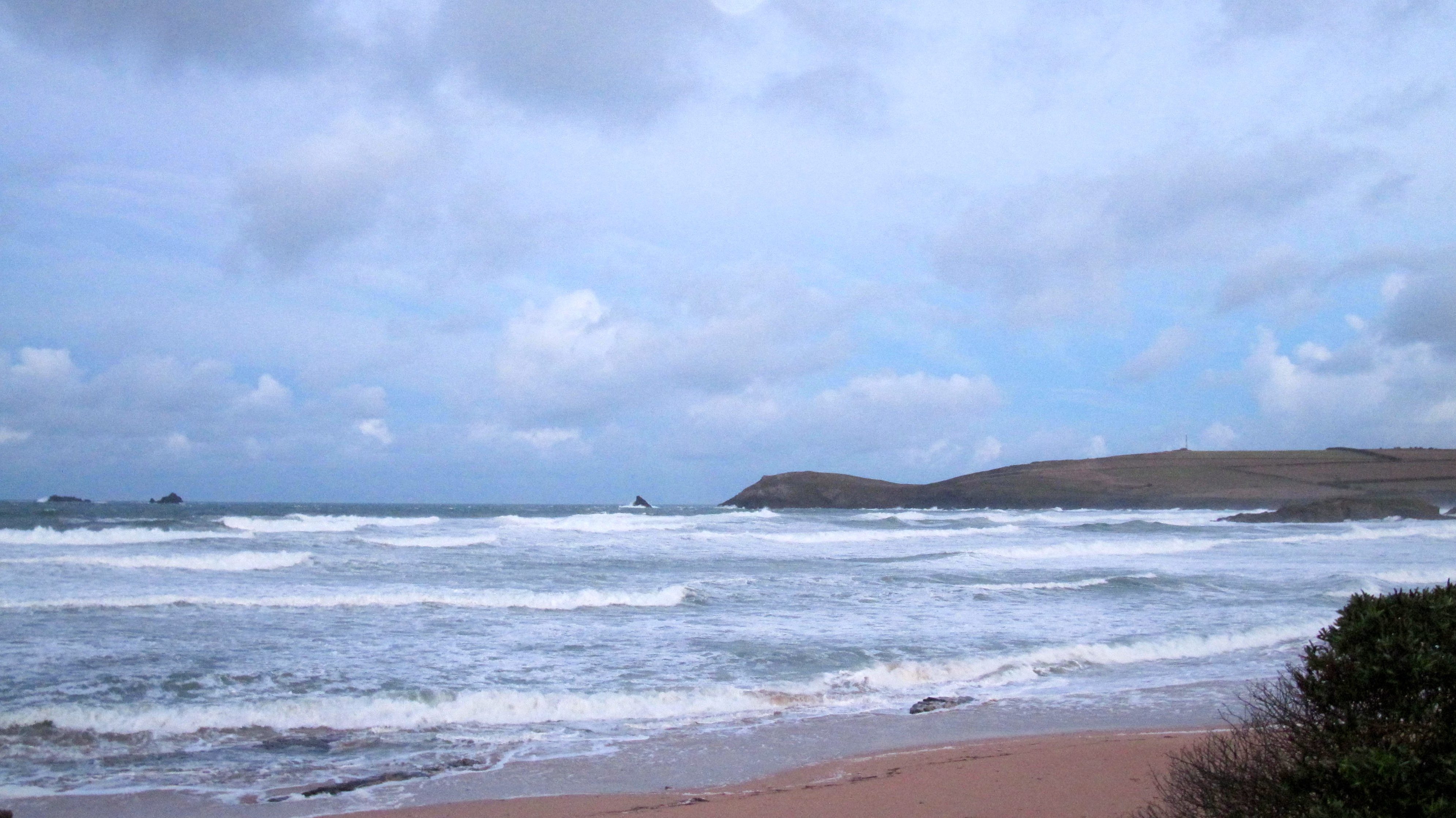 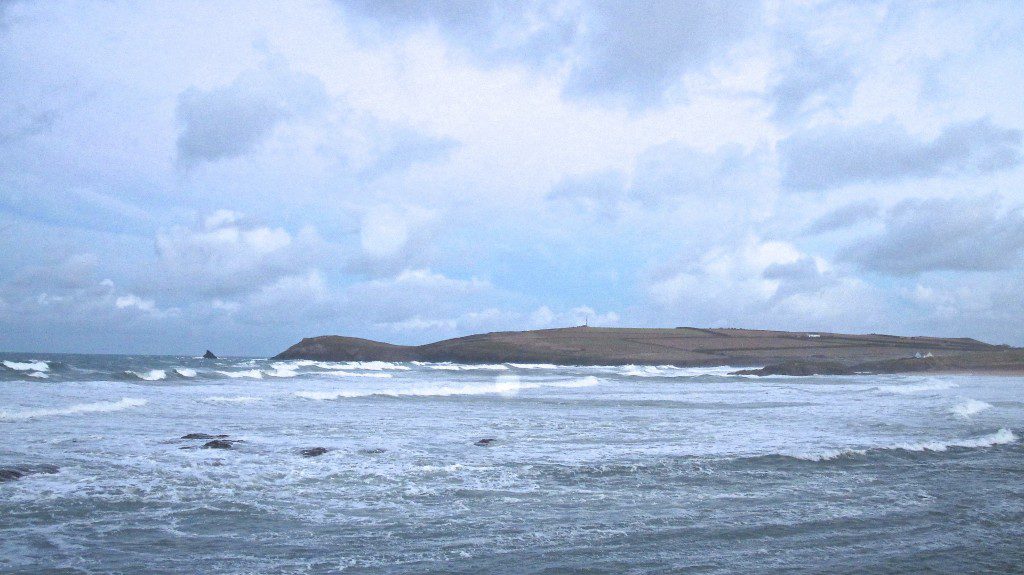 The wind has moved to the south west this morning and so it’s a fairly typical, windswept and damp, autumn morning, milder than it might be but a bit of a wet ’n windy one.
The surf is being pushed and pulled by that gusting wind, a mixed up mess of directionless waves. It’s all fairly sizeable but it’s not the sort of stuff that you would want to paddle out in.
The water is starting to get chillier too, isn’t it?
Let’s have a little look over at Harlyn……. 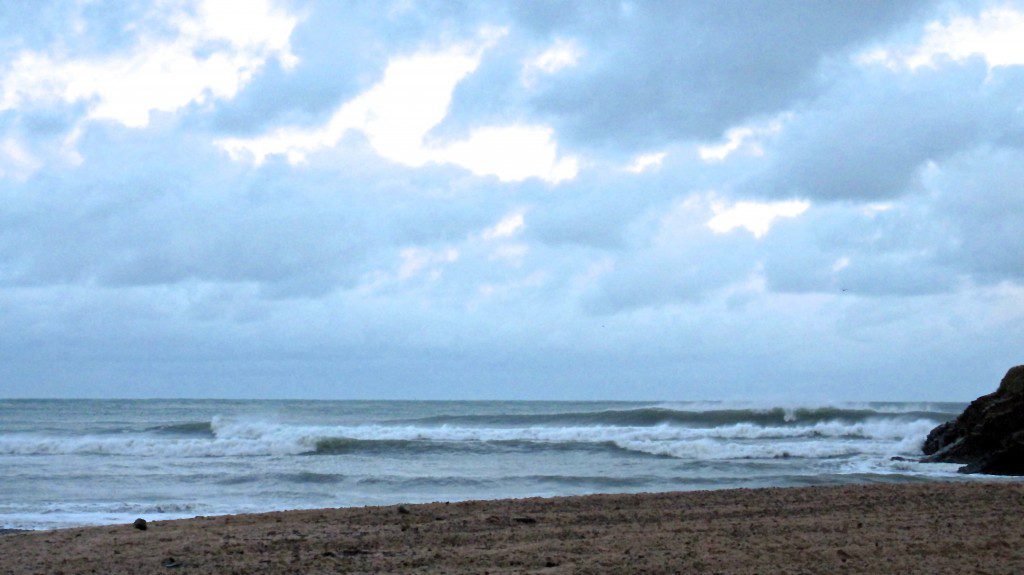 It’s looking promising around here this morning, three feet of smoothly groomed and stronger looking waves are marching in, tightly grouped and minutes apart, those sets are spilling themselves ashore into that offshore wind.
The wind is forecast to gradually ease throughout the day, so there’s no rush. Give it a couple of hours for the tide to peak and start to ease out again and things will sharpen up. Those waves should start to hollow and flow. Yep, it always closes out here to some extent but sometimes those close-outs are just very quick peelers! Or are those peeling ones just slow close-outs?
Anyway, sometimes there are those zippers off the Rock and today should bone of those days! 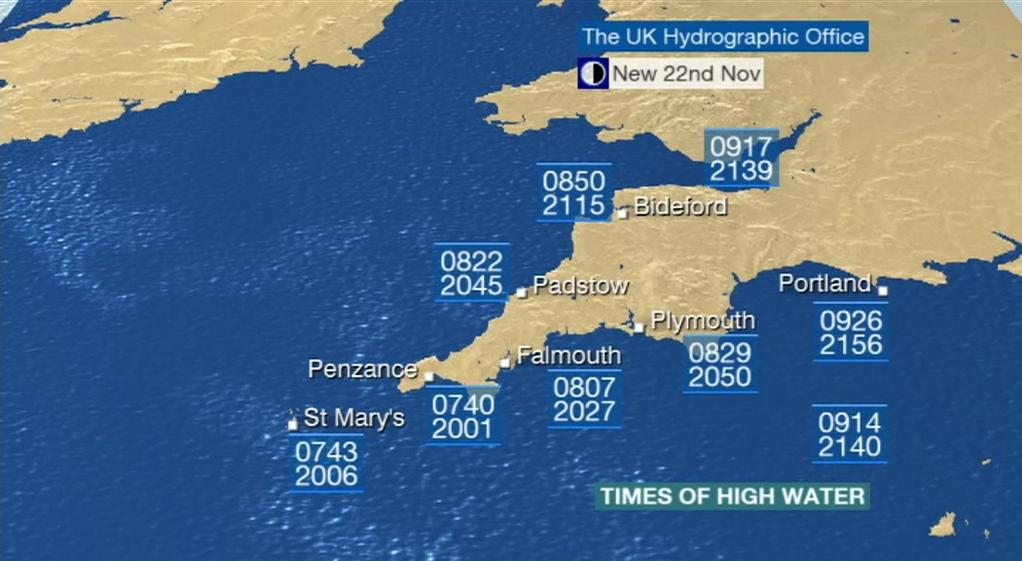 Early morning could be interesting, those brisk offshores should be blowing again, if only for a few hours.  And so the west facing surf breaks could be bowling with that pulsing swell throwing some spectacular hollow ones our way.  But that wind will switch soon enough and so for most of the rest of the day we’re going to be enjoying south westerlies again.  And so it’s going to be another Harlyn day again!  Three feet of sharp and shallow surf should keep us occupied for the rest of the day, maybe getting a little growl going around low tide when there might just be another quick little pulse of swell pushing in.  Hollow Harlyn days await!

This week has started out gently enough with only light winds holding that couple to three feet of rolling swell.
The wind is likely to settle to the south and south west for most of the rest of the week, twitching a little from the south west to a fickle south easterly as we go into the middle of the week before settling to the south west again and staying there for most of the rest of the week.
After a fairly medium sized start to the week’s swell we should see sizes increase quite suddenly into midweek with some sizeable stuff rolling our way by Wednesday.
We could be surfing those super sheltered spots from midweek with only a little luck. Although if the wind does manage to stay as light as it is forecast into the end of the week, our main surf breaks might just start to sizeably shine!
Have a great week, wherever you are and whatever you’re doing!