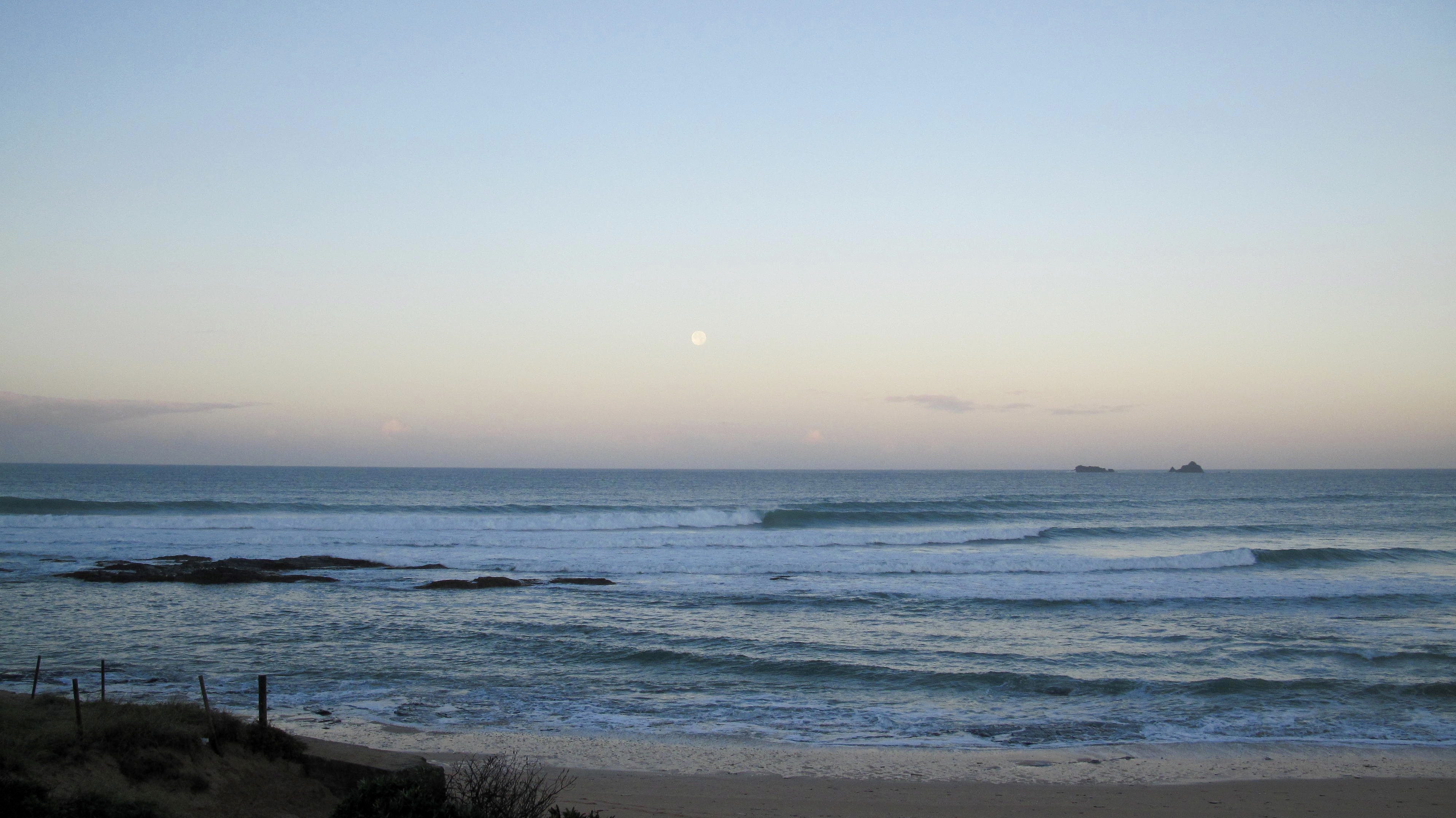 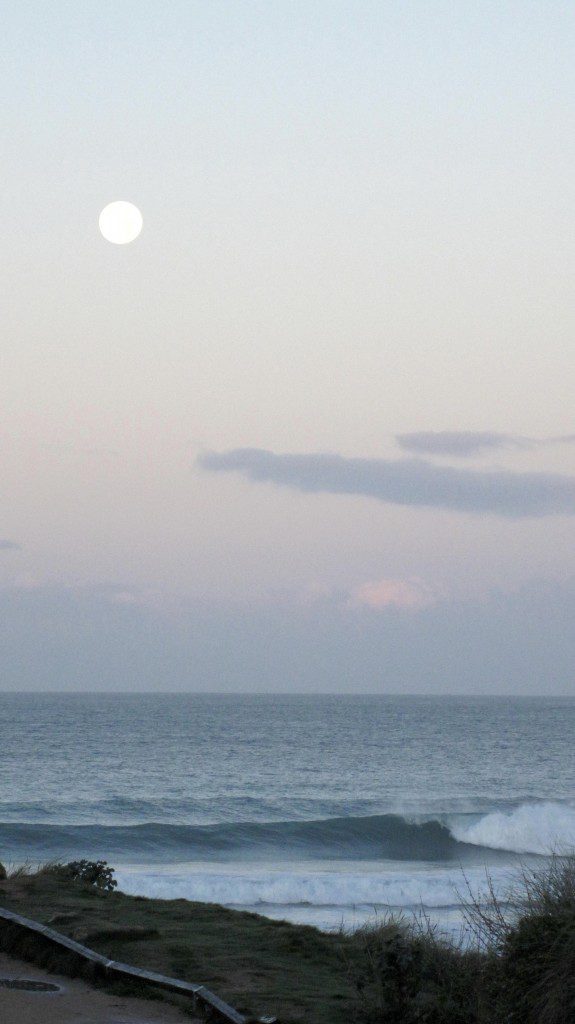 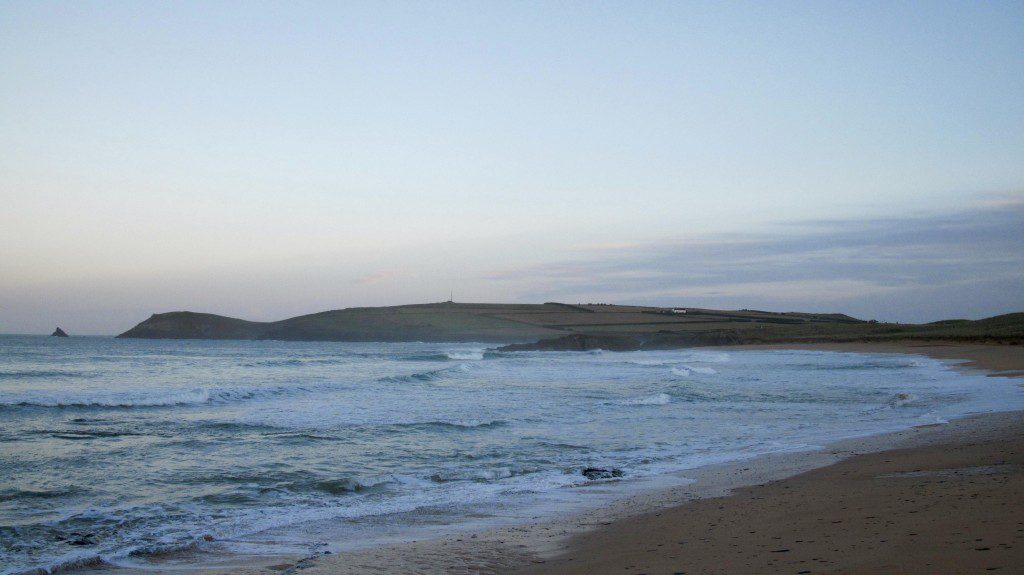 It is a fabulous morning down in the bay, with that big, fat Moon loitering over the Reef, a golden sunrise exploding inland and a lot of blue, blue sky spreading along the coast.
The surf is pretty clean, a three to four foot swell washing in, the Reef tripping that swell into smooth and peeling waves, a little fat in places but steep and hollow elsewhere.
Yep, it all looks good, even on the dropping tide.
The wind is forecast to stay light and offshore all day and it is likely to stay bright and cheerful too!
Have a great day! 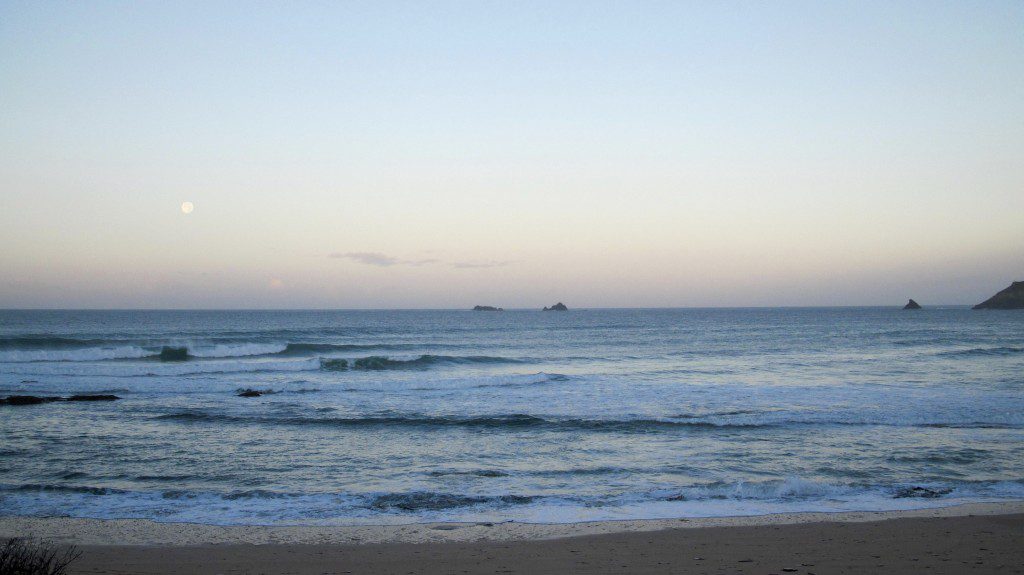 The front row of the car park is already starting to fill up as a decent couple to three feet or so of surf filters into the bay.
Those waves are glassy and smooth and clean and (for Harlyn) peaking and peeling!
If Harlyn is your favourite place or you just don’t fancy the paddle on the other side then it could be good here today. It is likely to drop a little with the tide but should build again on this afternoon’s rising tide. 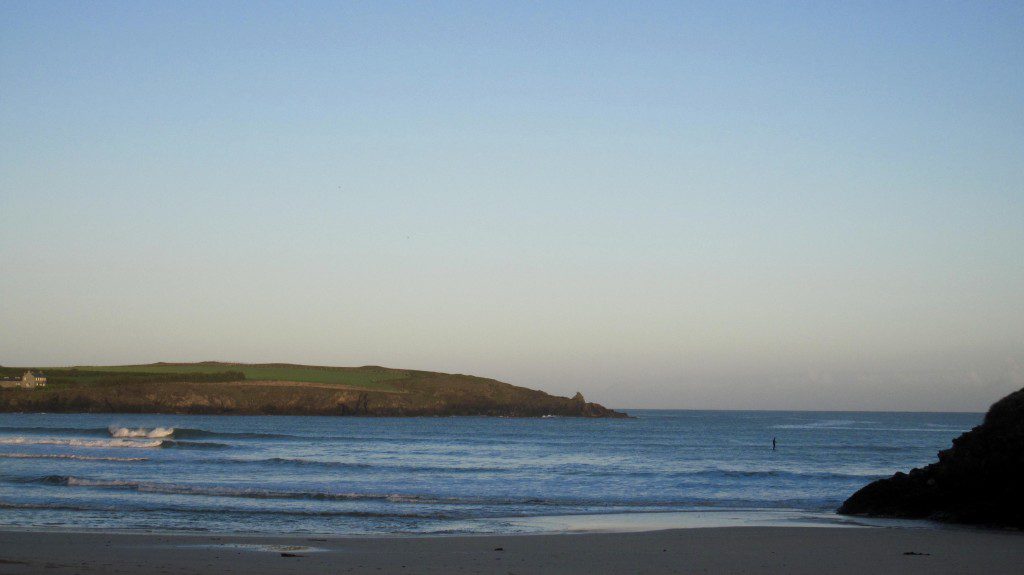 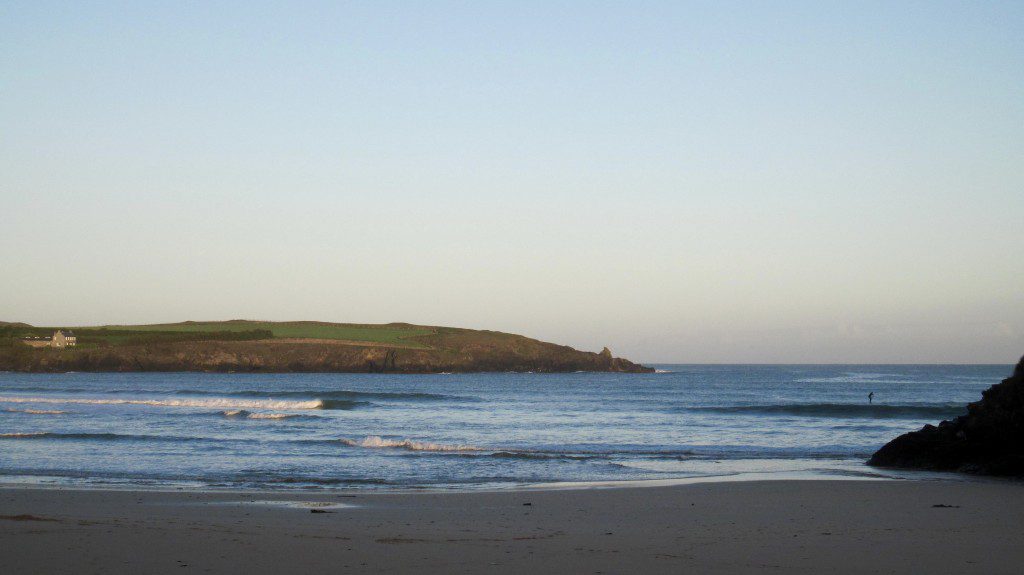 The swell is likely to rebuild through today but those winds are likely to ruin things at most of our regular surf breaks.
A three to four foot, building to six to eight foot swell is likely to build through the day, the wind settling from the west but hopefully easing through the afternoon.
And the weather isn’t looking all that either, with a grey ad overcast day leaking a lot of wetness over us, probably more so in the afternoon.
After saying all that, there is going to be a lot of pumping surf, so if you can find those sheltered spots at just the right stage of tide then you’re going to have some fun!

It has been a great start to what is turning out to be a bit of a wave drenched week!
That big old depression has been marching up the south west approaches pushing a whole heap of swell ahead of it, the low itself just brushing past us while the swell has roared our way.
Conditions are likely to have settled a lot as we go into midweek, the wind staying southerly before eventually going south westerly, Harlyn directly benefiting from that but our main breaks enjoying some clean and reeling surf for most of Wednesday too.
Thursday is likely to see a deterioration in conditions while the swell rebuilds through the day. Starting out at three to four feet, dusk will descend on a more solid six to eight feet plus, although that dusk might just be a darkening of an already very grey day.

In fact the surf has been looking so good that it seems to have tempted the internet’s original surf forecaster, SJ, out of semi-retirement. Here’s what he has to say (and remember, he doesn’t use capitals LIGHTLY!):

SJ’s Surf Forecast for the SW
Forecast updated at 00:10 Monday 26th October 2015
[Don’t forget to look at this forecast the day before you go beach for the latest, as things can often change!]

The Last 9 years…:
It’s been 9 years since this forecast stopped being broadcast regularly online, on BBC Radio, and on TV, and for the British Surfing Association. I went on my travels for six months from October 2006 to March 2007. A1Surf.com was put up for sale, which Friday-Ad bought in the Summer of 2007 and I was officially on ‘gardening leave’ for a ‘while’. The recession hit in September 2007, and the industry changed, the British Surfing Association went, and has now been replaced by surfinggb.com The great guys at magicseaweed.com including Ben Freeston took up the mantle and pushed the boundaries and limits of free surfing information on the web even further and for many they became the one stop place for surfing online – having recently been bought out by an international company. So now is time to bring a little something back to British surfing… As for me, I have grown a little older and wiser, met a great lady in my wife where we work on her social enterprise helping vulnerable adults and we have an amazing young daughter – happy days 🙂

Weekend Summary:
Too early to tell yet. Initial signs are for plenty of waves but you’d need to wait until mid-week to have an idea what the wind etc will be doing!

Thanks SJ! Any chance of making this a regular thing?