It’s big out there this morning, surprisingly big, and powerful looking too!

Thick swells are rolling all the way in from the Quies this morning, a beast of a peak rearing up a good hundred yards off the Point, all angry looking and wild.  The breeze is light and full of the mix of roaring surf and birdsong, always a favourite morning soundtrack!  But it is onshore and, as light as that breeze might be, it is having an effect.  The swell is thick and strong anyway and with that lightest of onshore breezes it’s all a little bouncy and foamy with fast moving rips slicing through it all.  It’s not the place to go if you’re fainthearted, not this morning!

There must be so many other places that could be absolutely classic right now but unfortunately right here isn’t one of them!  But looking at the wind forecasts, there are one or two promising a switch to offshore over the next couple of hours.  If that happened then it could well be a different world!  But you would have to be fully on it, that wouldn’t last that long if it did happen!

Or maybe grab a jet ski?  That would do it!

So, whaddya think?  Do you like the new look site?  Stripped back and cleaned up, we are hoping that you might find it all a bit easier, especially when using a mobile device.  And we might actually earn something from it by hopefully making it easier to get your grubby little mitts on some of those lovely, lovely products that we so happily sell!  Although we’re not holding our breaths on that one!  Bear with me while I get to grips with the workings of it all, it’s one of those things that has taken a while to get into place and now that it’s here it has come as a bit of a shock!

Reflections from Rhys Barfield on Vimeo. 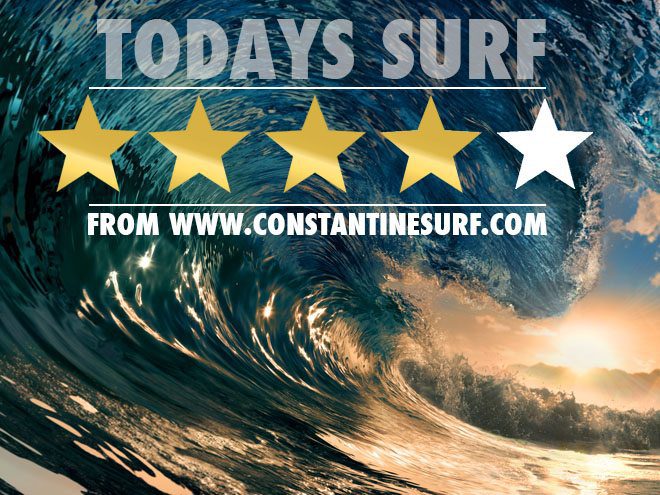 It is whomping in here this morning too!
It’s pretty much four feet regularly, clean, glassy and powerful looking as those waves churn themselves inside out off the Rock an hour or more after low tide. But every so often, many minutes between them, those sets are marching in, breaking way out on Cheyne’s left. And they are pretty big, six feet easily.
With the incoming tide and this fresh groundswell still finding its feet, you have to think that it’s only going to get bigger and more powerful.
Yep, it looks good but you can’t help but think that there should be a couple of breaks not too far away that will be outstanding!
Those guys that have a jet ski parked up for most of the year should have the opportunity to unleash it today, if only to get to those otherwise inaccessible breaks that should be towering!
And a lot of the guys are just off the plane back from their winters away, fully up to surfing speed and fully comfortable in these thicker and heavier conditions. Expect some good imagery from today, the sun is brightening through that low cloud allowing the photogs to fully use those favoured lenses.
It’s good here and it should get better but there might be places where it’s great today!

That thick groundswell from yesterday is likely to have peaked overnight but don’t worry, there should still be plenty of leftover swell continuing to power our way!
A still solid four to six feet of rolling surf should greet us in the morning, that light wind annoyingly onshore, annoyingly chilly again, only lightly blowing in from the north west but strong enough to make for slushier surf than we would like.
But more than likely it should have cleaned up a lot by lunchtime, the wind easing in strength again as it slides gracefully offshore, an east south easterly direction.
And then it could get good, good for everybody, not just the chargers seeking those adrenalin flush moments but for all the rest of us who just enjoy less survival testing stuff!
By the afternoon we are likely to be enjoying three to four set of clean and still powerful, reeling surf and , if we’re really lucky, in some pleasing bright sunshine too!

There’s a mixed up old week lying in wait with the wind forecast to switch about all over the place, the swell bouncing up and down as different little swells converge on each other before stumbling into our bays and coves, while the temperatures change from almost freezing to quite comfortable and back again every few minutes.
Things are likely to have calmed a lot by Tuesday, the variable breezes allowing some cleaner surf through again, if only for a while. And that surf is likely to be thick and powerful and quite sizey. Six to eight feet and bigger with some offshore wind through the morning hopefully!
The mixed up pattern of wind and swell is looking to prevail through midweek too with the wind switching all over the place, increasing in strength and then calming quite quickly, those chilly and heavy showers blasting through and being replaced by bright sunny moments.  Wednesday should show a gradually easing swell, onshore to start the day but offshore and clean by lunchtime.  And it could get really good by the afternoon!
You are going to have to be on it to find the best surf conditions this week, it will be good but probably only for short periods of time and only here and there.
But by keeping a keen weather eye out for those changing winds and by watching those tides, we should be able to find some better than average surf conditions for most of the time!
Have a great week, whatever you’re doing!