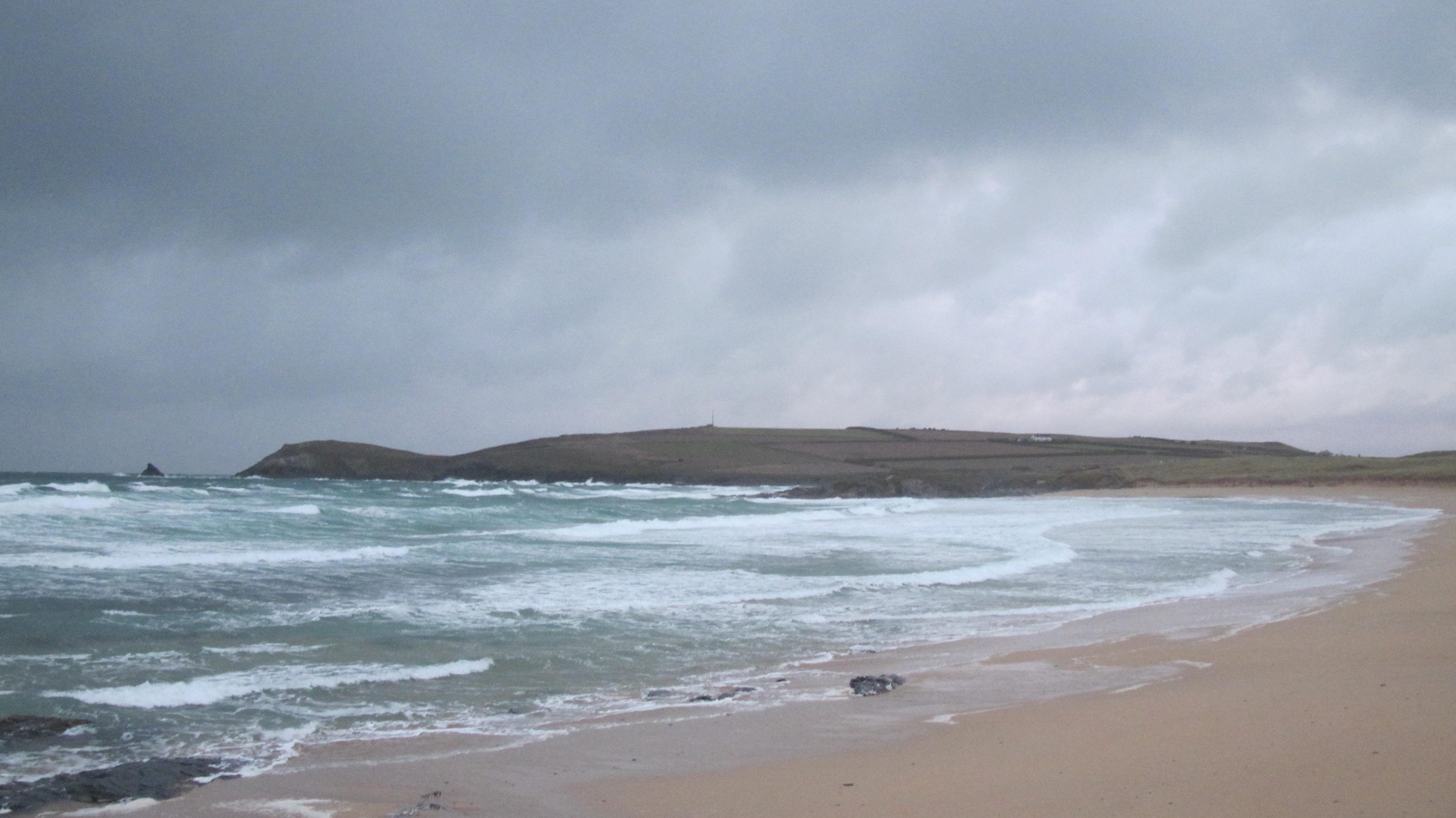 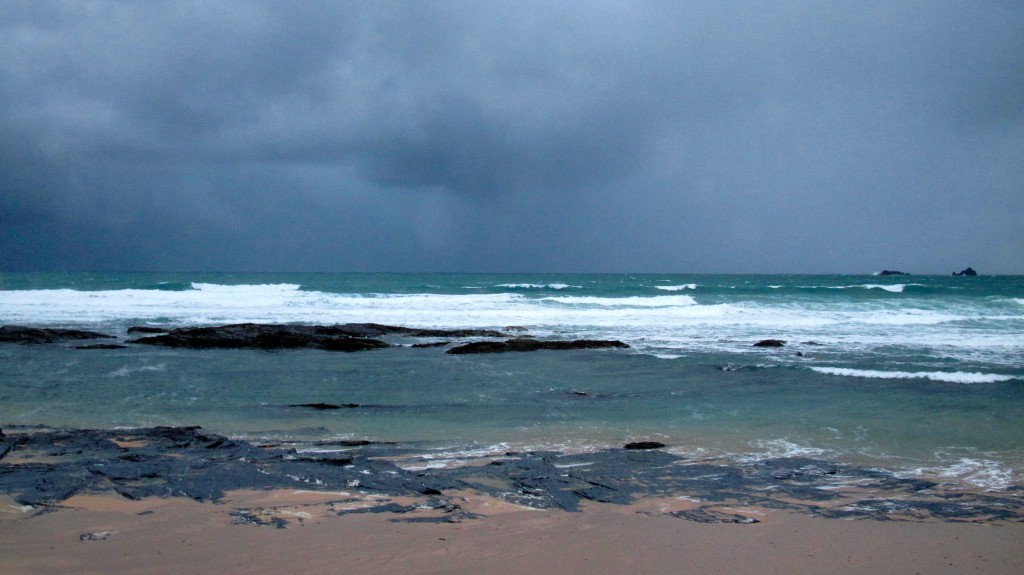 It’s a shocker of a morning out there this morning with a wild wind hurtling rain across the bay, stirring up the already mixed up swell and sand blasting the headland.
That wind is a stormy west sou’ westerly, filled with stinging rain squalls, a noisy and gusting force that is pulling an tugging at anything in its way.
It is way stronger than the forecasts and so I’m guessing that it might ease back soon enough, it’s unlikely that it can keep this level of violence up too long.
But even if it does weaken, we are still in for a stormy day of blown out surf conditions with not much reason to head anywhere near these surf breaks today!
Let’s have look at Harlyn:….. 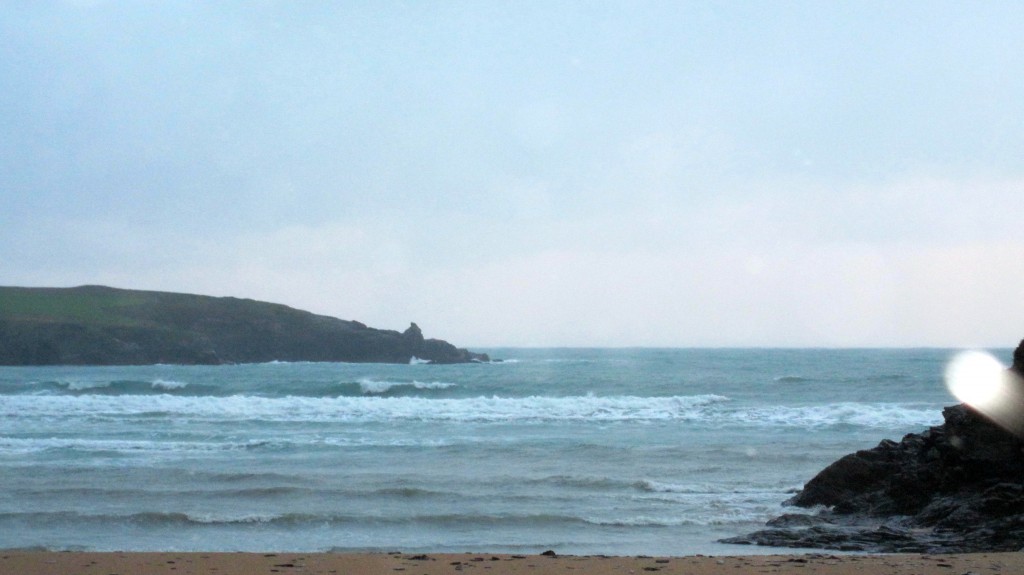 Ah, Harlyn, what would we do without this place on a storm windy morning?
Well, whatever it is we’d better get on with it because that wind is too westerly for here too!
There’s three feet plus of mixed up and fairly raggedy swell bouncing into the bay but that wind is still tearing lumps out of it. We will need to see the wind twitch a few degrees more southerly for conditions to improve and it would be nice if it calmed down a bit too. But neither of those things are likely for a little while yet.
It’s probably going to be the afternoon before it’s worth another look.
In the meantime, the bakery is open. 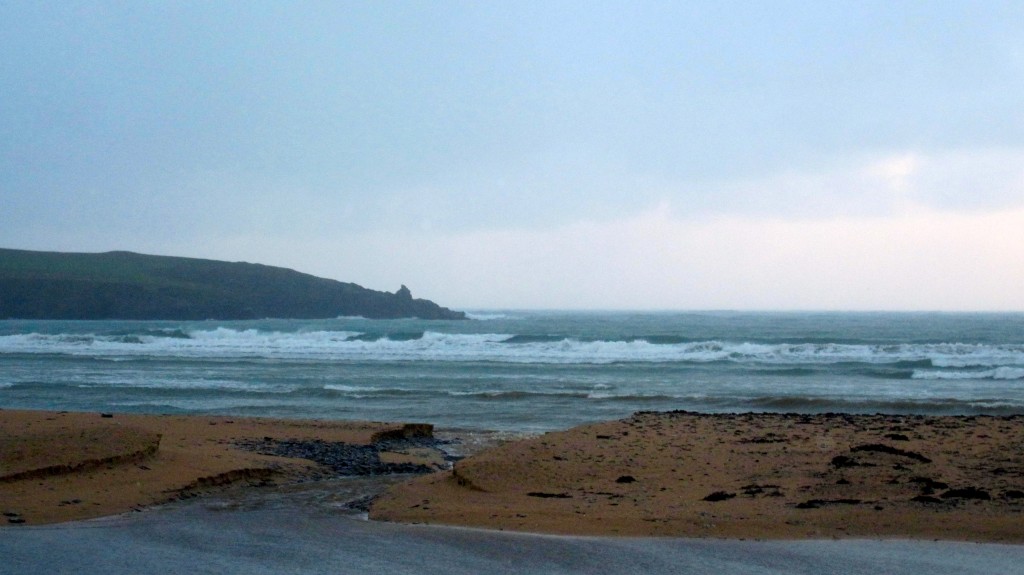 We could be seeing some big waves rolling our way this morning and hopefully that stormy wind of Friday morning might have calmed a bit.
Harlan is promising to deliver some chunky, sandblasting barrels through this morning, maybe going a little fatter through the afternoon on the incoming tide, as the wind slides back a little too far westerly again.
But for most of the morning at least, we should be seeing some grinding and hollow Harlyn waves.
It should get brighter by midday too!

It has been a windy start to the week with those strong north westerlies battering swells onto our coast but that is now changing as we go into the back half of the week with the wind backing through 180 degrees of the compass and settling to the south and west.
Those south westerly winds are going to be just as strong as the northerlies were but milder if not drier and also allowing more breaks on this coastline to maybe come into play.
Although that might not be until later on in the weekend. Before that we might have to put up with some howling westerly moments with even Harlyn getting a bit of a shake up.
But that wind also tends to support any swells out there, pushing them along and allowing them to build in strength as well as size and so it could get quite big into the weekend too!
So, by Friday afternoon and then for the next several days, it looks like Harlyn is going to be the place to be locally with those thick and building swells swinging in and unloading against that same wind. Four foot plus barrels await for quite a few days!
Have a great week, wherever you are and whatever you’re doing!