It’s a dark and broody Monday morning out there, that type of Autumn morning where you feel you’re getting into the start of Winter, although it is still pretty mild out there.
But the wind is blowing and the sky is threatening, a sliver of silver moon glimpsed between the thick and dark, rolling clouds.
The surf s a mixed up mess of waves as well, that grey slop of still thick and choppy stuff. It has dropped off a lot after the last few days but there are still some three to four feet lumps out there being blown around the bay by that wind.
No, it’s not great around here this morning, Harlyn is probably going to be the place to go, so let’s have little look….

There are a few waves getting in here this morning but you have to wait for them!
Most of the time those wishy washy foot or two waves are just pushing ashore, some closing out, others peeling for a foot or two but the set waves are winding down off the Rock, those three foot ones but only every ten minutes or so.
But there’s nobody around and it should be quiet all day after the weekend’s mayhem. And don’t forget, that leftover hurricane is tracking by out there – we should see an increase in size later! 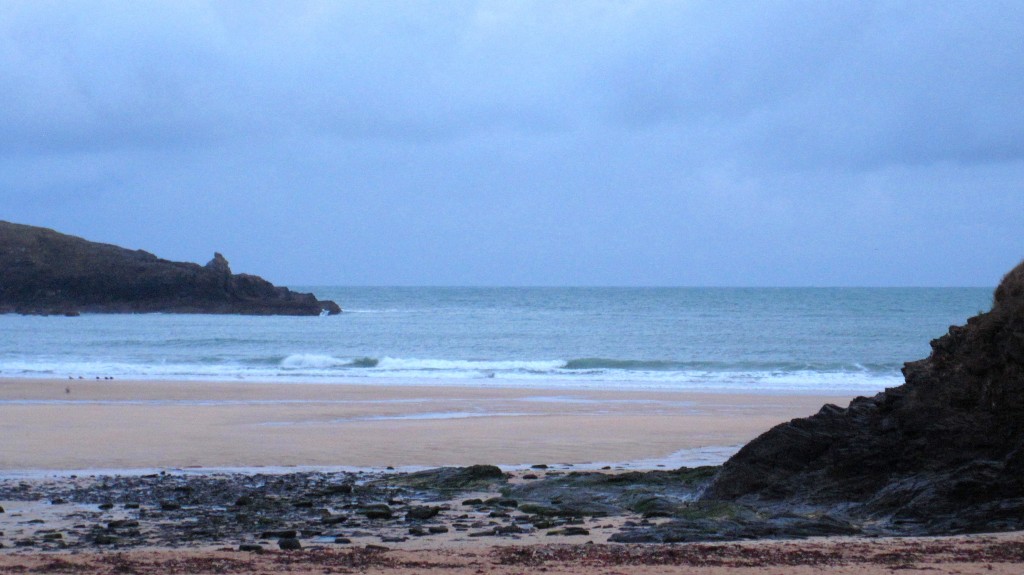 It’s likely to be macking this morning with some big and stormy waves battering our already scarred little coastline. As the leftovers of that hurricane slide by us, some thick and beefy swells are likely to be flung our way.
Unfortunately the wind is likely to be blasting too, maybe easing off quite quickly through the day but onshore at most places and destroying thane big and bumpy waves.
Harlyn is going to be our main option although there is the chance of some of those super sheltered spots firing up. If you can find somewhere sheltered then we should have a great day of surf!

It’s looking like we are in for another week of pumping waves but with those wandering winds too.
That same six to eight foot swell that we have been enjoying all week should carry us into the start of this coming week, the leftovers of that hurricane squirting across the north Atlantic and surely slingshotting some more thick and solid swell as a result.
And so it’s down to the wind, as always, to determine where and if the waves will break.
Around here it’s pretty easy to determine; when it’s big and south westerly then Harlyn is our spot, if the wind slides too far westerly or even north westerly then the far coast is the place to aim for but if the wind is from the south, through east all the way to north, then our main beaches open up.
After saying all that, it does look like a Harlyn week ahead, at least to start with!
Some bigger and bumpier waves are likely to be bursting onto the beach through Monday, gradually easing in size but hopefully cleaning up a little as we go into the middle of the week.
Have a great week, wherever you are and whatever you’re doing!