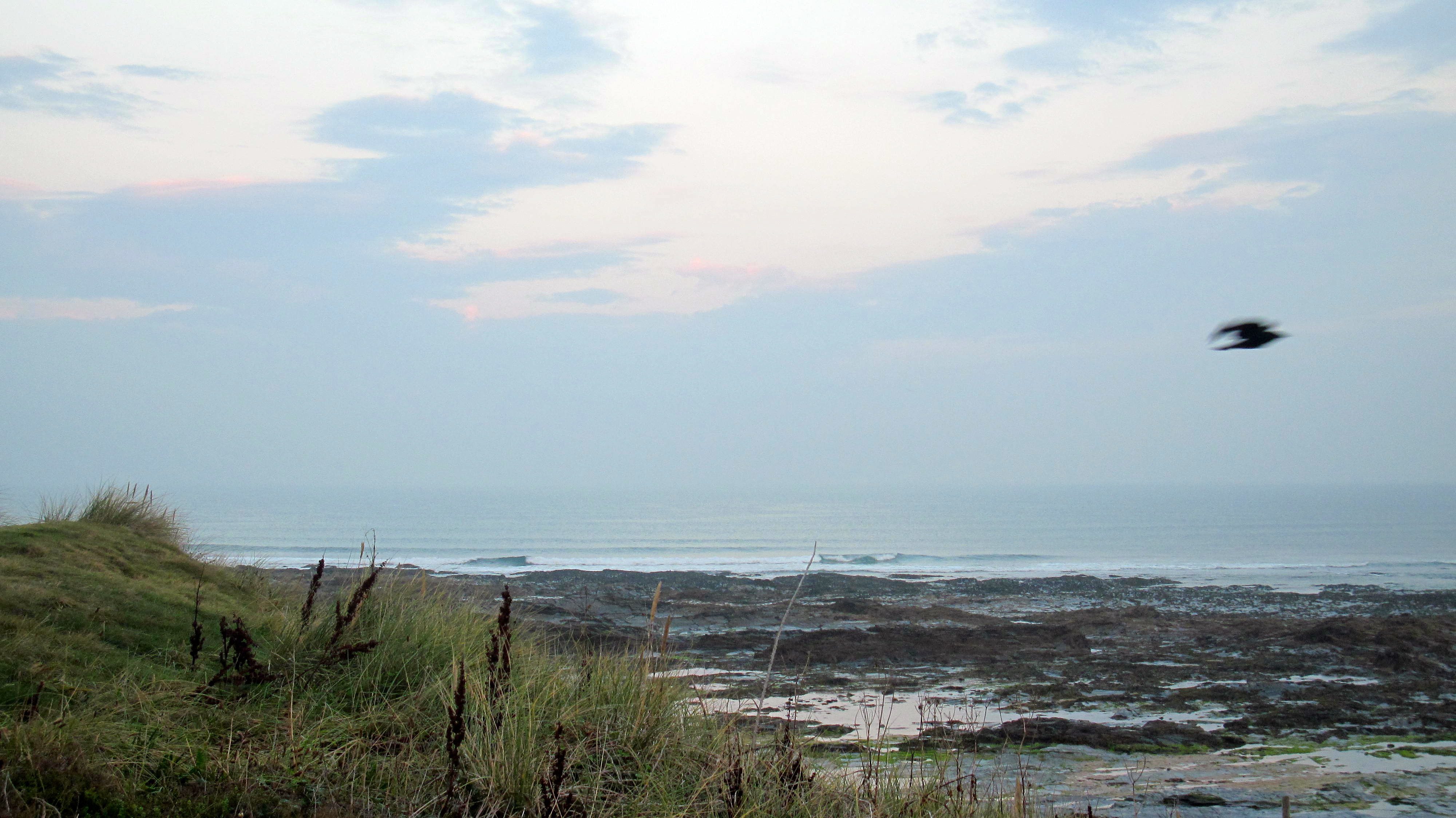 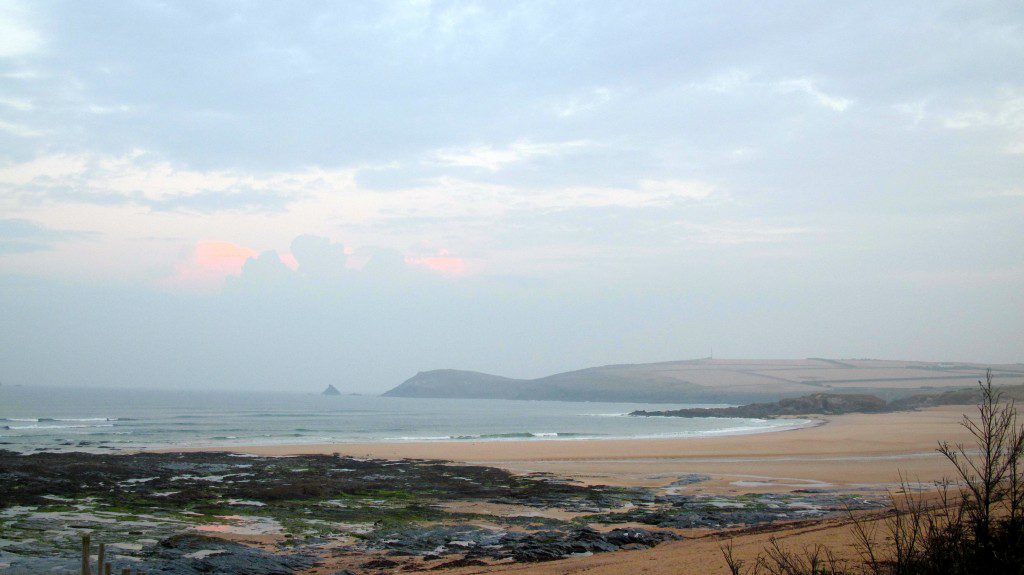 And yet another calm, peaceful and pleasant morning is upon us, a little hazy and grey in parts but mainly bright enough. That wind from yesterday has dropped, a superlight offshore breeze in its place, another sunburst and fiery dawn having brightened that side of the sky again.
The surf is lined up, smaller but very rideable with one to two feet walls of oily glass peaking and peeling onto the beach.
It’s not far off low tide right now, so you’d have to think that it should improve, if just a little, as the tide comes back in, hopefully building if just a little. In the meantime though, there are wide open, long travelled swell lines bending in, only small but very sweet looking. 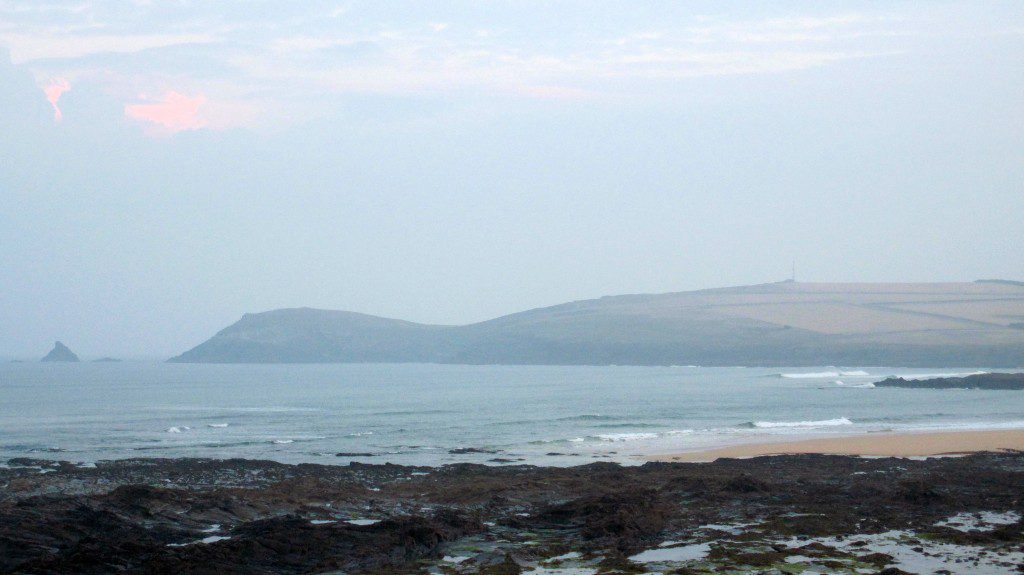 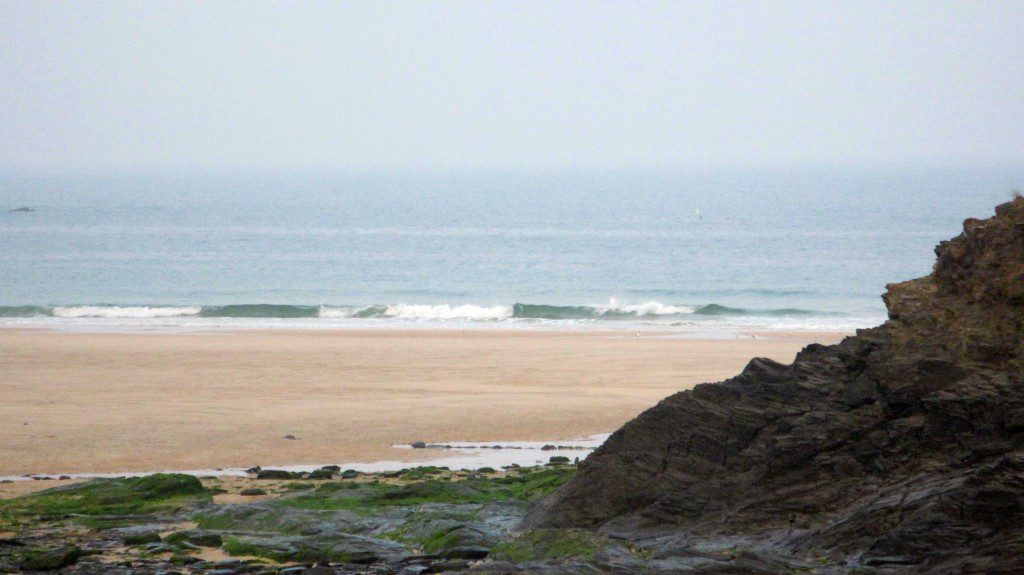 It’s pretty much flat again around here this morning, well, there’s maybe a foot or so of occasional little waves breaking and it is all a little bumpy and sloppy too. I guess that what breeze there is must be more from the north east maybe, although it is forecast to be straight easterly.
Anyway, there are barely shin high waves flopping in right now, so if you want to surf then you’ll have to pop over the other side of the headland and maybe the other side of the peninsula for some bigger stuff!

And on it goes!
The wind should be light, maybe veering more onshore through the afternoon than we have seen for a long, long time but offshore for a while in the morning and evening, while the surf rolls steadily ashore. Not big, just a foot or two but smooth and even and with big gaps between those well shaped little waves.
A pleasant end to a real good week of surf!

The swell generators that are out in the Atlantic are way down beneath Biscay and way up above Greenland and Iceland. And so the swells that are reeling onto our surf breaks this week have travelled a fair old way, smoothing themselves out and generating a lot of power and shape (for their size) along the way. And so we are having a double swell hit at the moment, the refracted and reflected bounce of swell from the very tip of Cornwall alongside those lines that have swung around Ireland. And when they coincide is when those powerful and smooth lines start throwing some more tubular shapes!
And there’s no reason to think that it’s going anywhere for a while yet.
In fact, as ex hurricane Edouard joins the mix, even bigger waves should be generated and propelled to our coastline for the weekend! And then there’s another deepening low being generated out to the west too. That should beef up those swells as we go through the weekend, churning some decent sized waves our way. Watch out for that one, it might just push some bumping swell our way but might also decide to jump into the party itself – that will remind us of Autumn if it does!
So, we can expect great surf, warm air, warm water and eventually some more sunshine throughout this weekend!
Have a great weekend, wherever you are and whatever you’re doing!