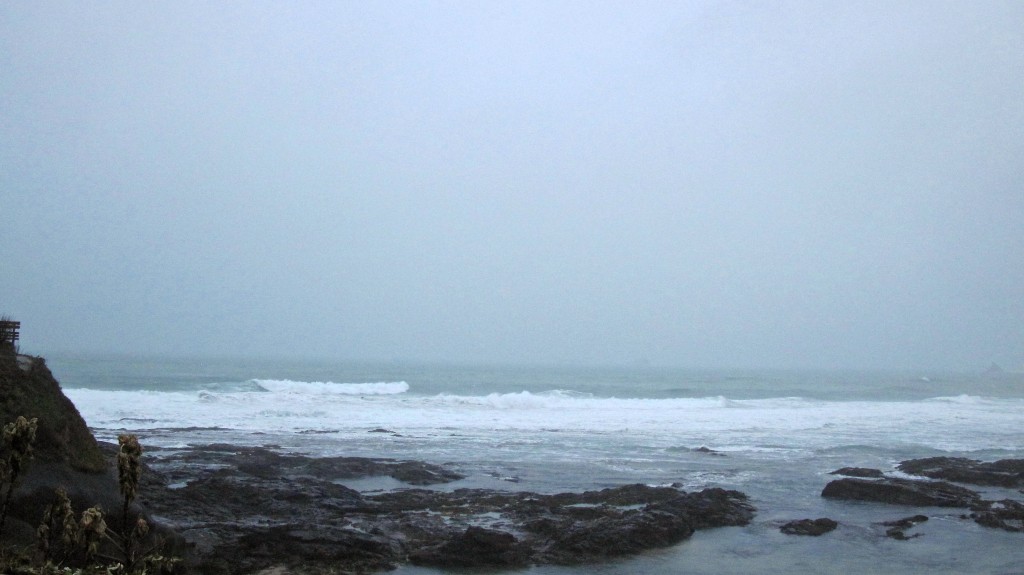 Dense mizzle is filling the air this morning, a fresh wind blowing rain squalls through the gloom while sky and sea merge into a damp canvas of grey.
The wind is from the west sou’ west, full of rain but milder than those northerlies we were having. But it is still blowing out the four to five feet of broken up surf, pushing and tugging those waves around the bay.
It’s not pretty and it’s not enticing.
Let’s have a little look at Harlyn.

Louie’s empty car in the car park is always a giveaway.
The surf is a decent three feet plus, that west sou’ wester just hanging on to being offshore. It’s dark and murky, grey and drizzly but there are some nice looking waves out there, if you’re keen enough!
The wind should ease, if just a little, and the surf should build, quite a lot!
If you don’t mind the cold and wet, you should get some fun ones this afternoon!

Big waves but with big wind, that wind blowing in from the north west and that is of no use to anyone on this coast.
The guys will be driving to the south coast today I would think, scurrying away from the six foot plus but blown out surf on this coast, looking for something smoother and smarter and crisper.
Let’s hope it’s big enough over there!

Big surf and strong, onshore winds are going to blow this school half-term week to an early end.
There has been a massive low pressure system moving in to the north west of us, still way out in the north atlantic but spinning bigger and bigger waves our way.
Both the wind and the waves are going to roll our way over the next few days and continue through the weekend.
And so we should be seeing the surf building and building, getting into the ‘big’ range by Friday, easing to ‘pretty big’ through the weekend and then hitting ‘gigantic’ for the start of next week!
Unfortunately for us, those winds are likely to be onshore everywhere locally, making that drive to the far coast our only option if looking for some cleaner surf to enjoy.
Sunday should see some cleaner surf at Harlyn but it is still likely to be that windy and wintery kind of stuff.
The weather?
Pretty yuk for a few days at least.
Have a great week, wherever you are and whatever you’re doing!