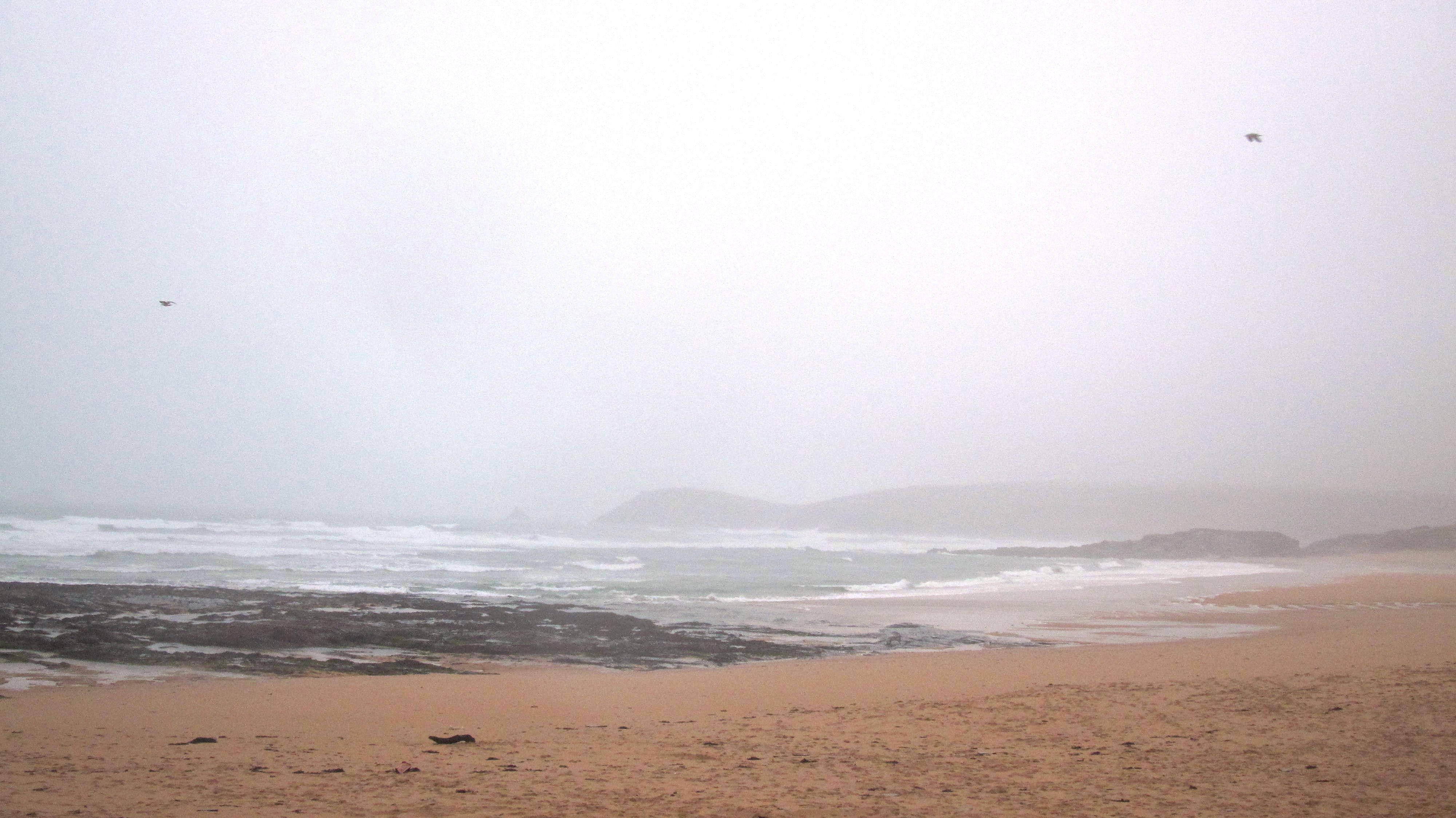 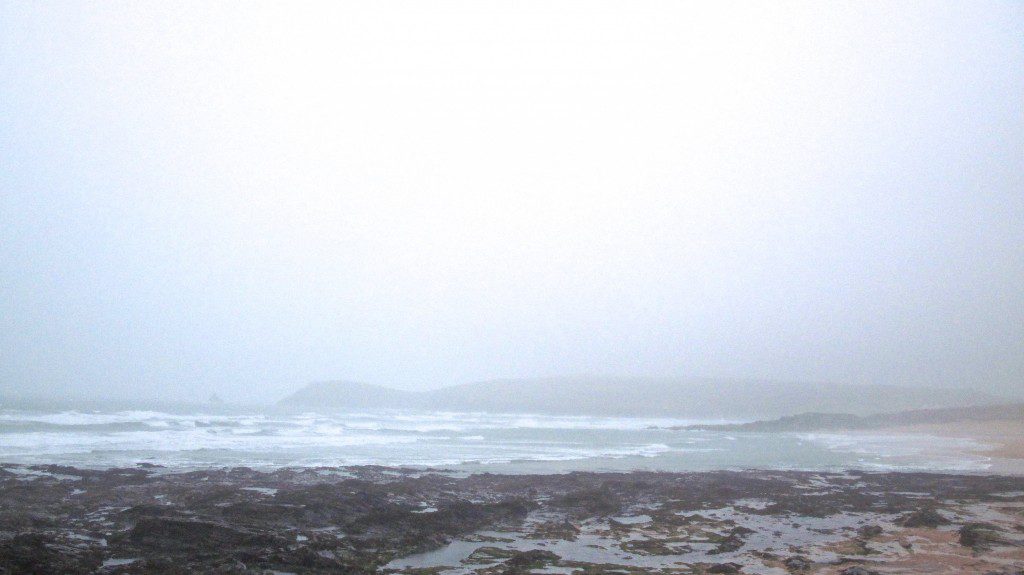 Another grey, wet and windy day is with us, the wind groaning, the surf rolling in erratically, stuttering and tumbling as that wind pushes and pulls at it.
Visibility is poor, the murk and dreariness closing in as the rain crushes the weaker plant-life.
Here is not the place to wander in for a surf today, it is dark and uninviting, milder than the season might dictate but still cold in that wind.
Four feet of mixed up, bouncy and windswept surf in these temperatures doesn’t really appeal!
But that wind is coming in from the south and west right now, although forecast to be north westerly, so it might be worth a little look at Harlyn…. 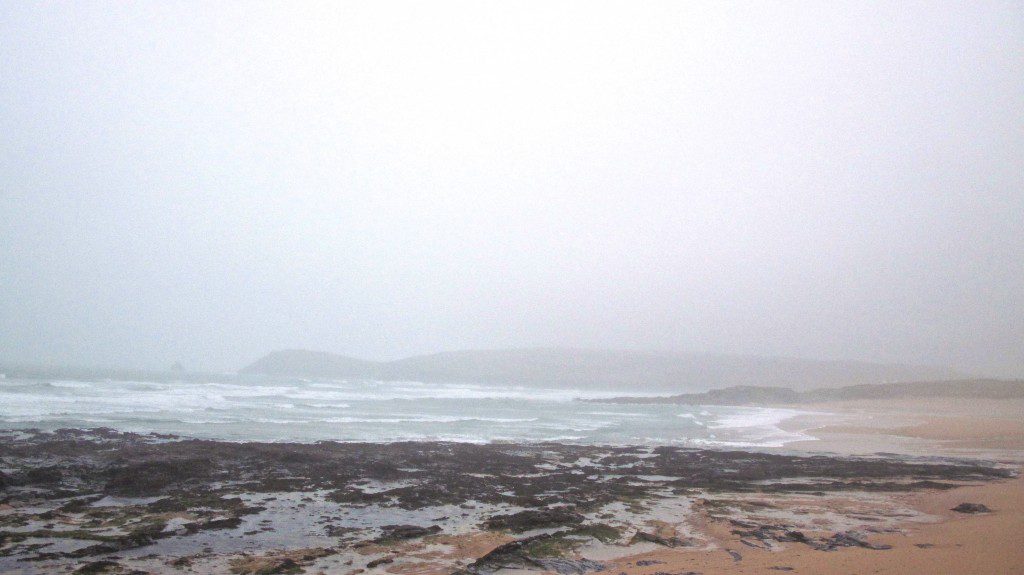 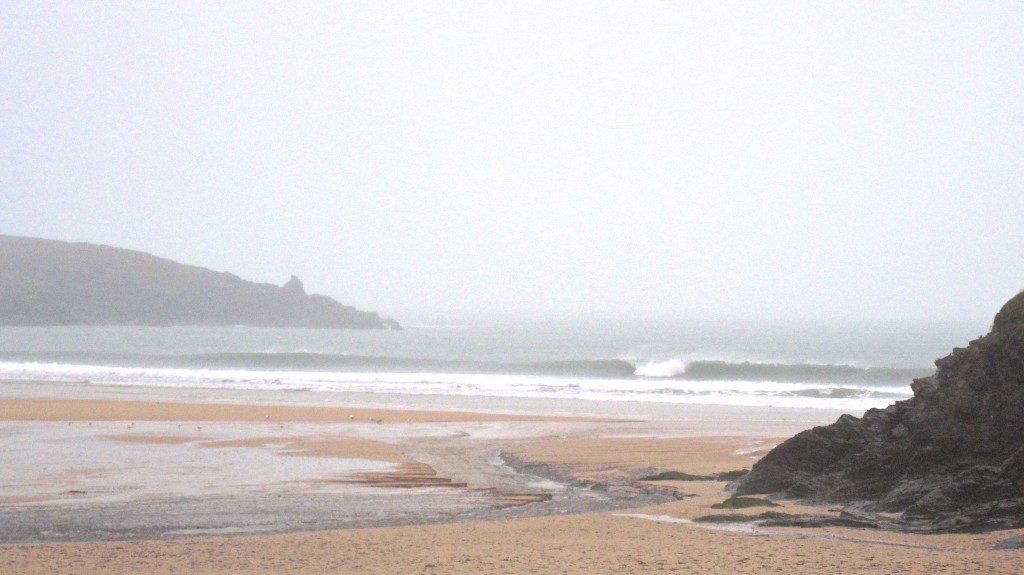 The surf is looking fun around here this morning! Grey and windswept and dark and wet but the wind is offshore, the waves are three feet or so, the tide is halfway to high and there are some walling waves out there in the gloom!
The forecasts were predicting north westerlies so these conditions probably won’t last for too long, that south westerly probably swinging onshore sooner rather than later. But, right now it is looking really fun! 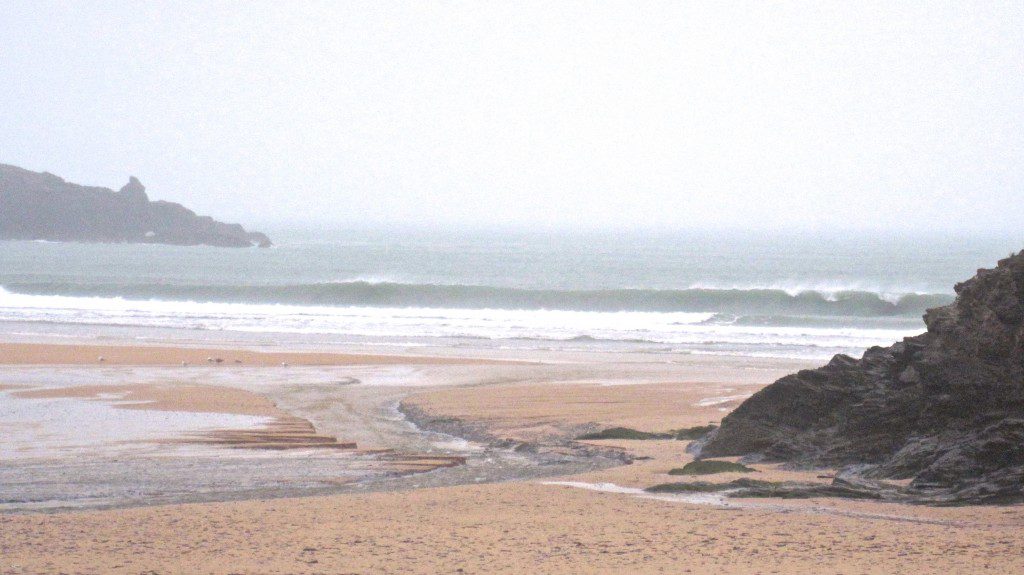 Well, it might be a bit brighter today but it is still going to be breezy and mainly onshore.
The overnight north westerly is likely to gradually ease to the south west through the morning, at least allowing Harlyn a chance to show some surf.
I’m guessing that we could be enjoying three to four foot, offshore Harlyn under some clear winter sunshine for most of the day but it might just be a slow start!

Big swells have been rolling our way since the start of this week, the wind powering through from the west and north west, blowing harder and harder, driving those big, big waves into our craggy little bays and coves. The surf has been big and it is likely to stay that way well into next week but those wild winds are going to continue to make it difficult to predict when there might be anything like clean surf around the west facing beaches anytime soon.
Our best chance of some more fun surf is that the wind twitches to the south west through Friday and into Saturday allowing Harlyn to clean itself up and start folding those rights off the Rock. That is likely to happen but we might have to wait for it and then it might shift back to the north west just as quickly. But while those south westerlies blow, Harlyn should be looking good. Offshore and three to four feet for most of Friday and pretty much all day saturday. That might just make up for the murky weather that is expected on Saturday following a brighter and cheerier Friday.
And so these weather patterns are set to continue with relatively mild temperatures belying those brisk and chilly winds that continue to blow. The bright spells are going to rush by in these winds but so too are those downpours!
Have a great weekend, wherever you are and whatever you’re doing!